Moon and Saturn up around midnight May 21

On May 21, 2019, the moon rises in between the planets Jupiter and Saturn. Saturn doesn’t rise until the middle of the night; if you’re not a night owl, watch for them before sunup on the morning of May 22.

Around the world on the evening of May 21, 2019, the king planet Jupiter rises first in the hours after sunset, followed by the moon and then Saturn around midnight. Thus the waning gibbous moon shines quite close to the planet Saturn on the sky’s dome. The rising times of the moon and Saturn vary around the world. If you live at mid-northern latitudes or farther north, the moon and Saturn won’t rise into your southeast sky until very late evening, maybe even after midnight daylight saving time. If you’re not a night owl, your best bet for catching Saturn might be in the hours before daybreak. If that’s the case, see the chart below.

Click here for a recommended almanac to find out when the moon and Saturn rise into your sky.

At southerly latitudes in the Southern Hemisphere, the moon and Saturn will be up by mid-evening. Look for Saturn to appear as golden-colored “star” in your southeast sky.

Look before sunup May 22, to see the moon between Jupiter and Saturn. You can distinguish Jupiter from Saturn quite easily, because Jupiter is much brighter. Jupiter ranks as the fourth-brightest celestial body to light up the sky, after the sun, moon and Venus, respectively. Jupiter outshines Saturn by some 14 times. 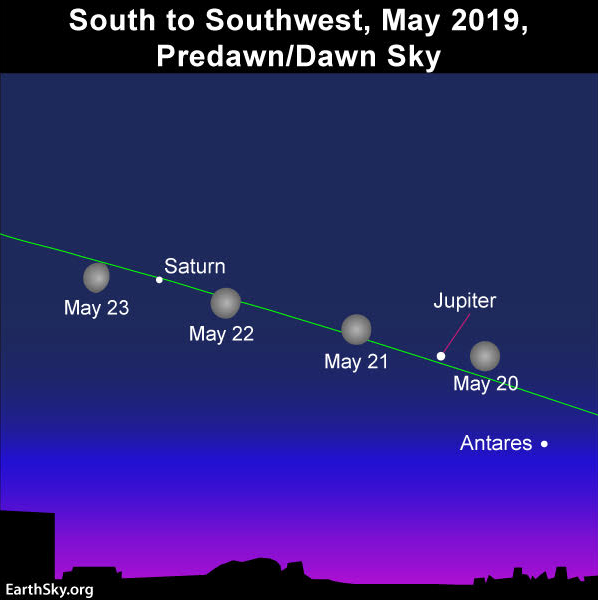 Nonetheless, Saturn shines as brilliantly as a 1st-magnitude star and should be easy to spot with the eye alone. Simply use the waning gibbous moon to guide you to the planet Saturn these next few nights. If you have a telescope, use it to to view Saturn’s glorious rings. Saturn is the most distant planet that you can easily see without a telescope.

If you were at just the right place worldwide, you could actually watch the moon occult – cover over – Saturn for up to an hour or more on the evening of May 22. For instance – at Cape Town, South Africa – Saturn disappears behind the lit side of the waning gibbous moon at 10:18 p.m. local time and reappears from behind the moon’s dark side at 11:11 p.m. local time. Click here for more information on this occultation, and remember the eclipse times are listed in Universal Time (UTC). Here’s how to convert UTC to your local time. 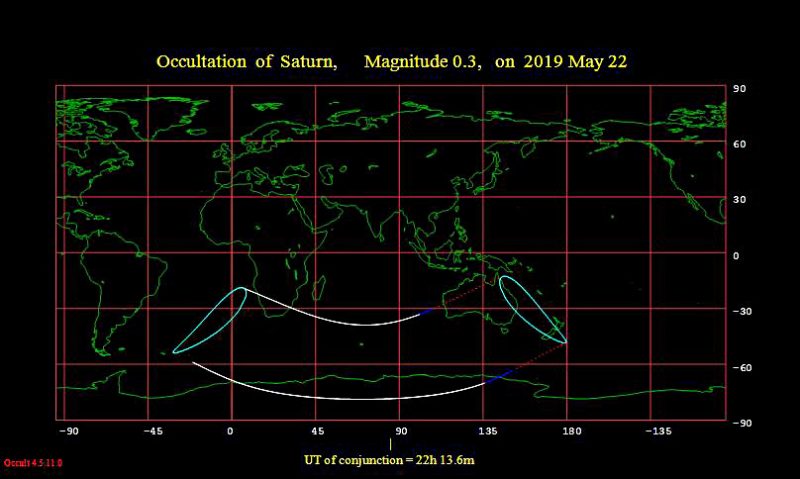 The area between the dotted red line shows where the occultation happens in a daytime sky, between the blue lines at morning dawn and between the white lines in a nighttime sky. Worldwide map via IOTA.

Bottom line: On May 21, 2019, the waning moon rises between the planets Jupiter and Saturn. The next evening, May 22, the moon and Saturn are still close. Saturn doesn’t rise until the middle of the night; if you’re not a night owl, watch for them before sunup on the mornings of May 22 and 23, when they’ll be high in the sky.