These 2 worlds – Saturn and Mars – will shine brightly and beautifully in our sky over the coming months. Let the moon guide you to them in the next few mornings. 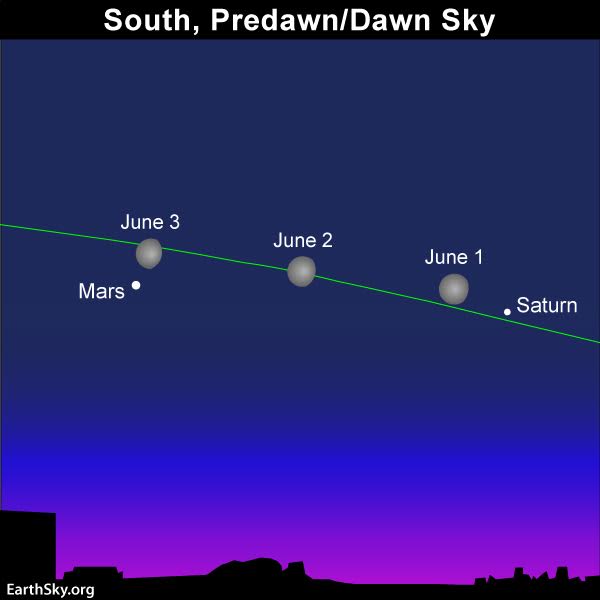 Before daybreak on June 1 to 3, watch for the moon near Mars and Saturn. Because the moon moves eastward in front of the constellations of the zodiac at the rate of about 1/2 degree (one moon-diameter) per hour, or about 13 degrees per day, look for the moon to change its position from day to day. It’ll be closest to Saturn on the morning of June 1, approximately between Saturn and Mars on June 2, and closest to Mars on June 3.

If you’re a night owl, staying up past the midnight hour, you might also catch Mars beneath the moon and Saturn before your bedtime. However, Mars is still rising late at night. It’s low in the east as seen from around the globe in the wee hours. The predawn hours present a better view of the moon, Saturn and Mars, at which time all these worlds will shine higher in the sky. 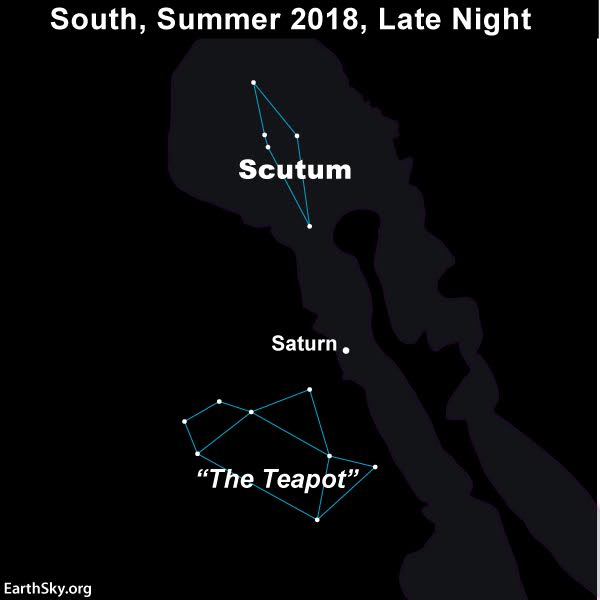 This year, in 2018, you can use the planet Saturn, which shines as brilliantly as a 1st-magnitude star, to locate “The Teapot” and the constellation Scutum the Shield. The Teapot makes up the western half of the constellation Sagittarius the Archer. 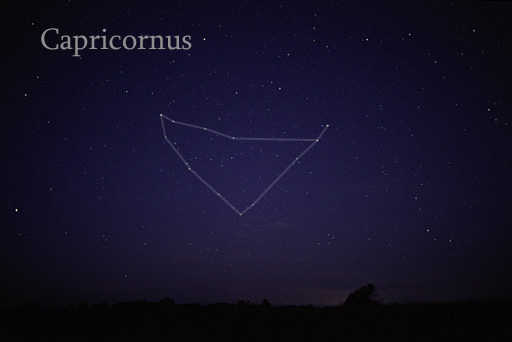 The constellation Capricornus has the shape of an arrowhead. Image via AlltheSky.

There are a couple of ways to distinguish Saturn from Mars. A telescope – even a modest backyard variety – will show you that Saturn has glorious rings whereas Mars does not. Want to see Saturn’s rings? Read this first.

No telescope? No problem. Notice with your unaided eye that Saturn appears golden in color while Mars exhibits a reddish hue. Also, Mars is now the brighter planet, and it’s soon to be much, much brighter. Mars will remain brighter than Saturn for the rest of 2018.

In the relatively near future, Saturn and Mars will be at their brightest for 2018, and in Mars’ case its brightest for some years. Saturn will reach opposition – when Earth will fly between this outer planet and the sun – on June 27, 2018. Opposition marks the middle of the best time of year to see an outer planet, like Saturn or Mars. That’s when these planets shine at their brightest best for the year and stay out all night long.

Mars will reach its opposition one month later, on July 27, 2018. This is a very special opposition of Mars. The planet will be brighter around late July than it’s been since 2003, when it was brighter than it had been in some 60,000 years!

Mars is closest to Earth about every 2 years, when Earth passes between this planet and the sun. That event is called Mars’ opposition because, at such times, Mars appears opposite the sun in our sky. There’s also a 15-year cycle of close and far Mars oppositions, and that’s what this chart is showing. Notice that, in 2018, Mars will be especially close. The reason is that Mars’ opposition is July 27 and its perihelion – when it’s closest to the sun – is relatively soon afterwards, on September 16. In 2018, Mars will be closer and brighter than it’s been since 2003. Diagram by Roy L. Bishop. Copyright Royal Astronomical Society of Canada. Used with permission. Visit the RASC estore to purchase the Observer’s Handbook, a necessary tool for all skywatchers.

Bottom line: Use the waning gibbous moon to locate the planets Saturn and Mars before daybreak on the mornings of June 1 to 3, 2018.