Moon, Saturn and Mars on September 7

Watch for them tonight, and also for Antares, a bright star. Then note the moon’s change of position relative to these objects over the next several days. 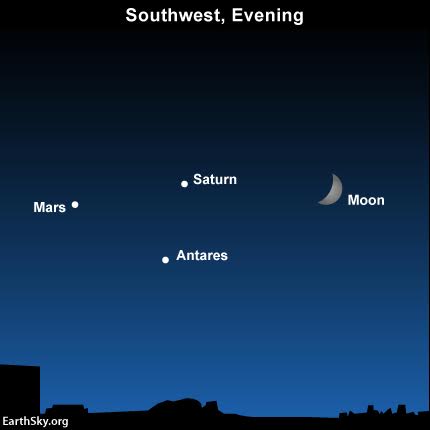 Tonight – September 7, 2016 – and for the next several nights, as darkness falls, let the moon be your guide to the planets Saturn and Mars. Also look for the star Antares, the heart of the Scorpion, making a picturesque triangle with Saturn and Mars. With the moon in the picture as well, you can see some interesting configurations on the sky’s dome in the coming evenings with these two planets, and this bright star.

Every night – as Earth revolves under the heavens, spinning eastward in the direction of sunrise – all the heavenly bodies travel westward, in the direction of sunset. Thus all heavenly bodies rise and set, just as the sun does. The moon, Saturn, Mars and Antares will stay out late this week at mid-northern latitudes, not setting until late evening. In the Southern Hemisphere, they’ll stay out even later, setting after midnight.

But while Earth is spinning eastward, the moon is moving eastward in its orbit. That’s eastward relative to the backdrop stars of the zodiac and relative to the planets, which always reside in front of the zodiac. The moon’s change of position will become obvious at this same time tomorrow night, on September 8, as the moon moves closer to Saturn. 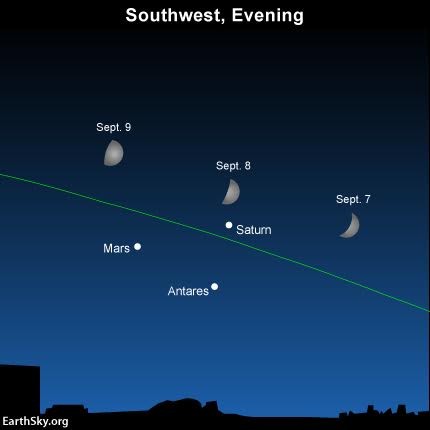 At the same time each evening, note how the moon moves eastward relative Mars, Saturn and Antares. The green line depicts the ecliptic – the sun’s yearly pathway in front of the constellations of the zodiac.

Because Mars is farther east of the moon on September 7 than Saturn is, the moon will take two days, instead of one, to reach Mars. As darkness falls, look for the moon to pair up with Saturn on September 8 and then more closely with Mars on September 9.

Bottom line: Beginning on September 7, 2016, use the moon to locate the ringed planet Saturn, red planet Mars and bright reddish star Antares. Then note the moon’s change of position relative to the planets Saturn and Mars (and the star Antares) over the next several days.