Watch for the moon and Saturn

The moon and Saturn are fairly easy to spot Monday evening, if you have a clear view to the west after sunset. Mercury is tougher, but possible! 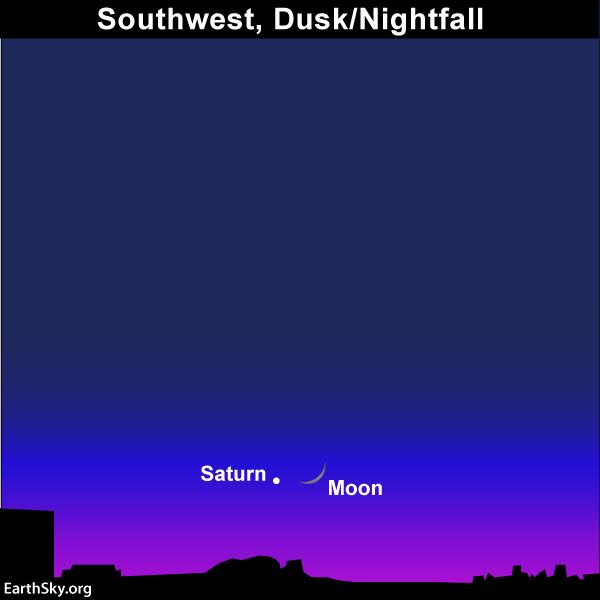 Tonight – November 20, 2017 – finds the slender lunar crescent pairing up with the planet Saturn after sunset. As dusk gives way to darkness, look in the southwest sky, and rather close to the sunset point on the horizon, for the lovely celestial couple, the moon and Saturn. Start your search no later than an hour or so after sundown. These two worlds will follow the sun beneath the horizon at or around nightfall.

You might – or might not – see the planet Mercury below the moon and Saturn tonight. Mercury is rather difficult to catch from northerly latitudes, but is easier to spot from the Southern Hemisphere. Several people did catch Mercury Sunday evening, near the very young moon, and sent us photos. 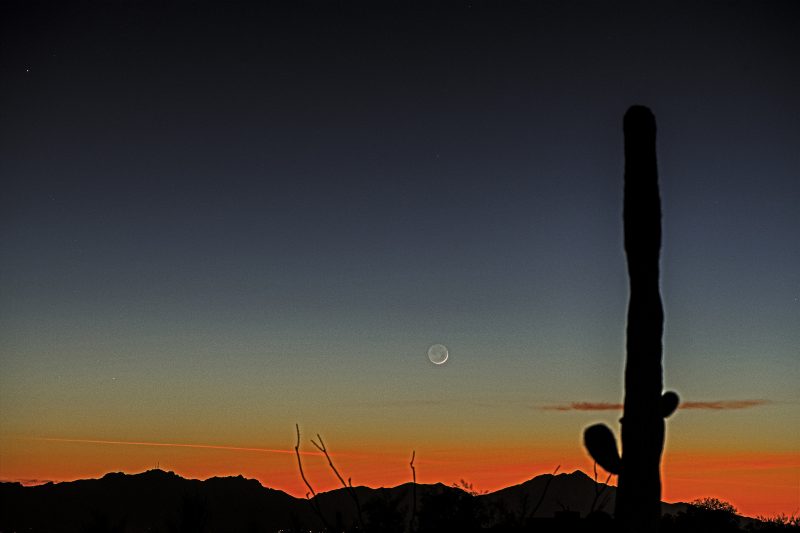 View larger. | Eliot Herman in Tucson, Arizona caught the one-day crescent moon (with earthshine) on November 19, 2017 – with Mercury (to left) and Saturn (above left). Captured with a Nikon D850 and a Nikon 105 mm VR macro lens. The NEF image was converted to TIF and deconvoluted prior to Photoshop adjustment.

Click here for recommended almanacs; they can provide the setting times for the sun, moon, Saturn and Mercury in your sky.

Our sky charts above and below are for mid-northern North American latitudes, where the waxing crescent moon and Saturn appear especially close together after sunset on November 20, 2017. From the world’s Eastern Hemisphere – Europe, Africa, Asia, Indonesia, Australia and New Zealand – tonight’s moon appears more to the west of Saturn (and closer to the planet Mercury). See the sky chart below. 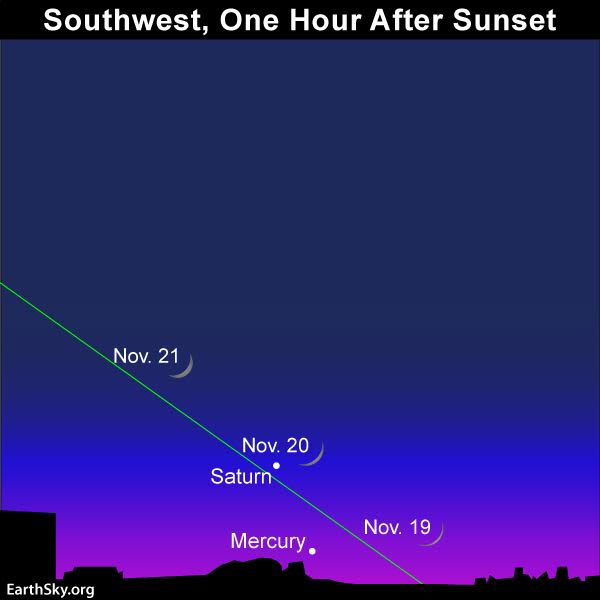 The moon, Mercury and saturn as viewed from mid-northern North American latitudes. On the same date in the Eastern hemisphere, people will see the moon offset toward the previous date.

On the same date in the Eastern Hemisphere, the moon is more offset to the west of Saturn (and closer to Mercury) than it is in North America. Moreover, the farther east you are in the Eastern Hemisphere (far-eastern Asia, Australia and New Zealand), the more the moon is offset toward the previous date on the sky chart. For instance, from far-eastern Asia, Australia and New Zealand on November 20. 2017, the moon appears closer to Mercury than to Saturn as darkness falls on November 20.

Of course, when we say the moon is close to Saturn or Mercury, we’re really saying that the moon resides close to Saturn or Mercury on the sky’s dome. The moon is actually nowhere close to these planets in space. Tonight’s moon is only around 252,000 miles (406,000 km) distant from Earth. But Saturn and Mercury lie much father away, at about 4,000 and 400 times the moon’s distance from Earth, respectively.

Day by day, watch for Saturn to slowly but surely sink downward and closer to Mercury on the sky’s dome. Look for these two worlds to be in conjunction (near the same line of sight) on November 28, 2017.