Moon and Regulus on February 1

Enjoy the pairing of the moon and Regulus – brightest star in Leo the Lion – on February 1, 2018! From some places the moon will pass in front of (occult) Regulus.

Tonight – February 1, 2018 – the full-looking waning gibbous moon moon closely partners with Regulus, brightest star in the constellation Leo the Lion. Look for them in the east at nightfall or early evening. They climb highest up for the night at roughly 1 a.m. local time and sit low in the west as darkness gives way to dawn on February 2.

From North America, we see the waning gibbous moon to the east (below) Regulus. However, as seen from Europe and Asia, the moon appears higher up relative to Regulus. In fact, if you’re at just the right spot on Earth, the moon will actually occult (cover over) Regulus for a portion of the night tonight.

The February 1, 2018, occultation of Regulus appears in the night sky in northern Asia and northern Europe.

This occultation is part of a series of monthly lunar occultations of Regulus that started on December 18, 2016. The series will continue until its conclusion on April 24, 2018. 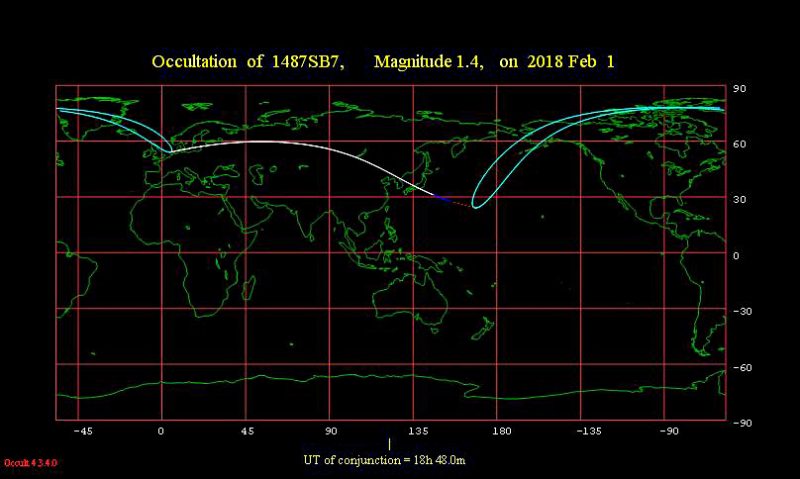 Who will see the occultation of Regulus on February 1, 2018? Details via IOTA.

In fact, of course, it’s the Earth that’s spinning, causing that westward shift, and, meanwhile, the moon’s orbital direction is always eastward, or toward the sunrise direction, in our sky.

Regulus is well known for its extremely fast rate of spin. Our sun takes nearly four weeks to complete one spin on its axis. In contrast, Regulus spins full circle once every 16 hours. This star has an equatorial diameter that’s 4.3 times greater than the sun’s but it still rotates at 700,000 miles (1,100,000 km) per hour.

At that speed, you could reach the moon in a little over 20 minutes!

Bottom line: Enjoy the pairing of the waning gibbous moon and Regulus – brightest star in Leo the Lion – on February 1, 2018! From some places the moon will pass in front of (occult) Regulus.

Live by the moon with your 2018 EarthSky lunar calendar!