On September 1, both the moon and dwarf planet Pluto lie in front of the constellation Sagittarius the Archer. 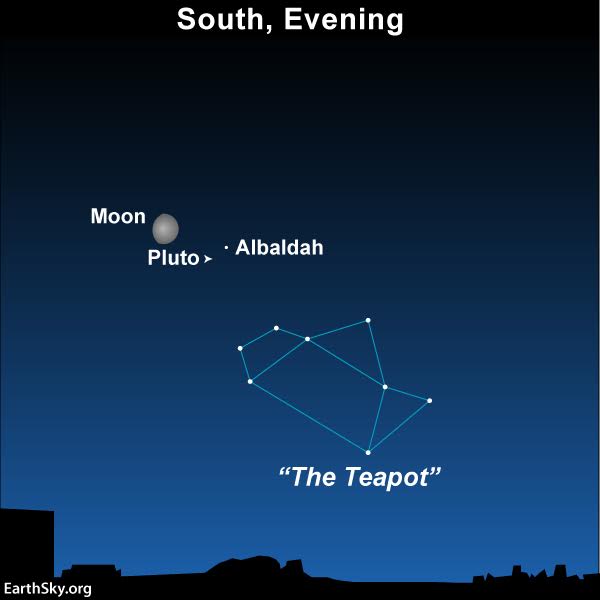 Tonight – September 1, 2017 – finds both the moon and the dwarf planet Pluto in front of the constellation Sagittarius the Archer. Will you see Pluto near tonight’s waxing gibbous moon? No way. It’ll be difficult enough to spot the 3rd-magnitude star Albaldah (Pi Sagittarii) in the moon’s glare, or the Teapot asterism to the south of the moon.

Both the star Albaldah and the Teapot are easily visible in a dark country sky on a moonless night. Pluto, on the other hand, is nearly 2,000 times fainter than the faintest star that’s visible to the unaided eye. But you can use tonight’s moon to get a ballpark idea of Pluto’s place in the starry sky. 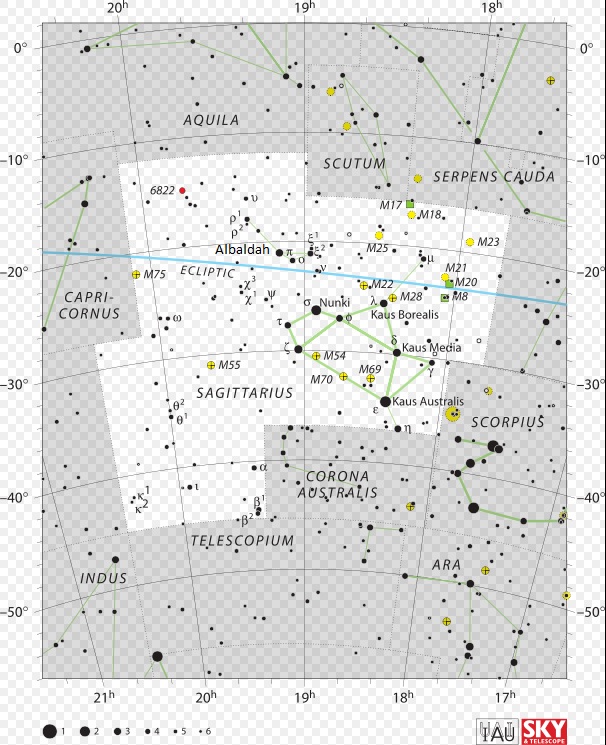 Sky chart of the constellation Sagittarius via the International Astronomical Union (IAU). We label the star Albaldah (Pi Sagittarii) to the upper left of the Teapot.

If you can locate the star Albaldah (Pi Sagittarii) on a dark, moonless night (see above sky chart), then you’ll have an even better feel for Pluto’s position in front of the constellation Sagittarius. Another nearby star – the “bright” binocular star HP 179201 – shines closer yet to Pluto, but this 6.4-magnitude star is still some 1,600 times brighter than Pluto (magnitude: 14.4). Click here for a sky chart of HP 179201, remembering that the star’s name won’t appear unless you place the cursor on it. Click here for more information on Pluto and a high precision sky chart.

Even the experienced practitioner of the telescope will find it hard to catch Pluto. You need a 14-inch or larger telescope to view Pluto as a dim speck of light amid dim specks of light. But if you can at least spot the star Albaldah on a dark night, you’ll have a good idea of where Pluto resides in front of the backdrop stars.

Tonight – September 1, 2017 – the moon and Pluto are both in front of Sagittarius, one of the 13 constellations making up the zodiac.