Moon near Uranus on November 20

On the night of November 20, 2018, the moon is located along our line of sight to the faint planet Uranus. But don’t expect to see Uranus in the moon’s glare. 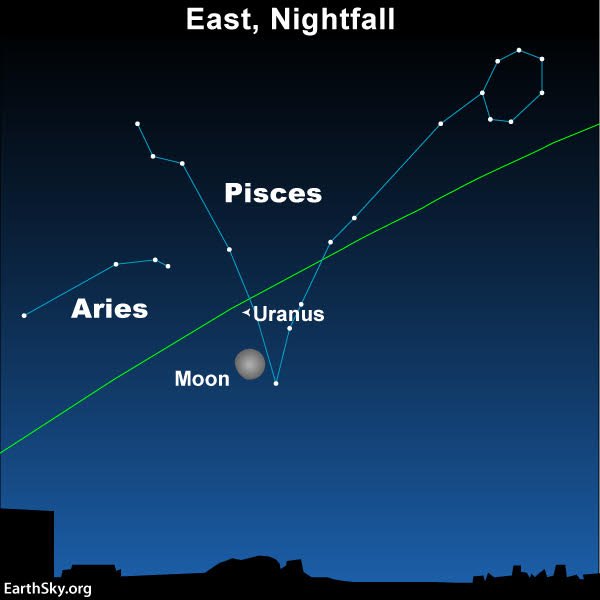 Tonight – November 20, 2018 – as the moon travels in front of the constellations of the zodiac, it’ll appear in the general direction of the planet Uranus. Both the moon and Uranus are near the border of the constellations Pisces and Aries tonight. Although the bright moon will drown out Uranus from view tonight, the moon will mark the approximate position of Uranus in the starry sky. 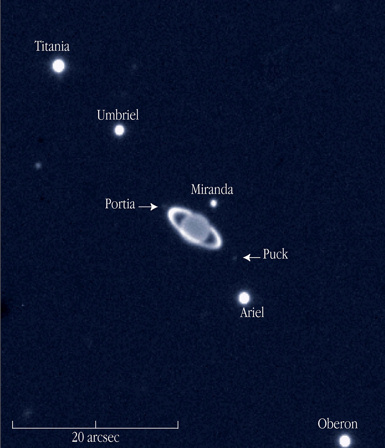 What will you see of Pisces and Aries on this moonlit night? Hard to say, but you might make out Hamal, the brightest star in the constellation Aries, and possibly the four stars of the Great Square of Pegasus, as shown on the sky chart below, via the International Astronomical Union (IAU).

Sky chart of the constellation Pisces

The constellation Pisces is best seen on a moonless night. Many stargazers use the Square of Pegasus to locate Pisces. Click here for a sky chart showing you Uranus’ position in Pisces for 2018.

If you’re familiar with the Great Square of Pegasus, you might be able to star-hop from there to find the constellations Pisces and Aries on a moonless evening in late November or the first week or two of December 2018. Uranus resides in front of the constellation Aries but very near the ecliptic and the Pisces border. Your best bet to finding Uranus is to locate the 4th-magnitude star Omicron Piscium in Pisces, which is easily visible to the unaided eye on a dark night.

Most stargazers need binoculars, a moon-free night and a detailed sky chart, like the one here or here or here. Uranus is bigger than Earth, but it’s also 20 times farther from the sun than Earth is from the sun.

Uranus is the seventh planet outward from the sun. Even on a moonless night, this world appears no brighter than the faintest visible stars. 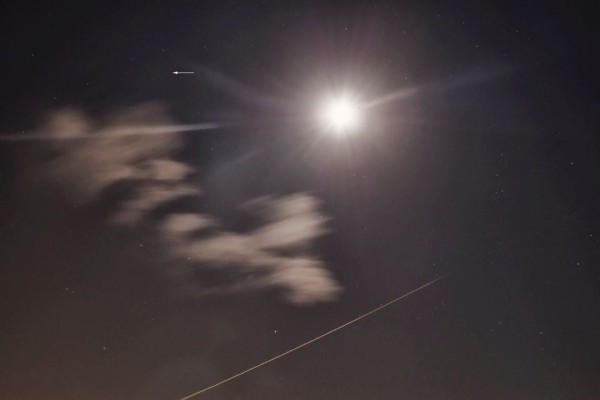 The moon with clouds and a contrail. Faint planet Uranus is at the arrow tip. Photo taken November 21, 2015, by Nikolaos Pantazis in Greece.

Bottom line: On the night of November 20, 2018, the moon is located along our line of sight to the faint planet Uranus. But don’t expect to see Uranus in the moon’s glare.