A beautiful view of the waning crescent moon, Pleiades star cluster and bright star Aldebaran in the dark eastern skies before dawn on July 9 and 10. 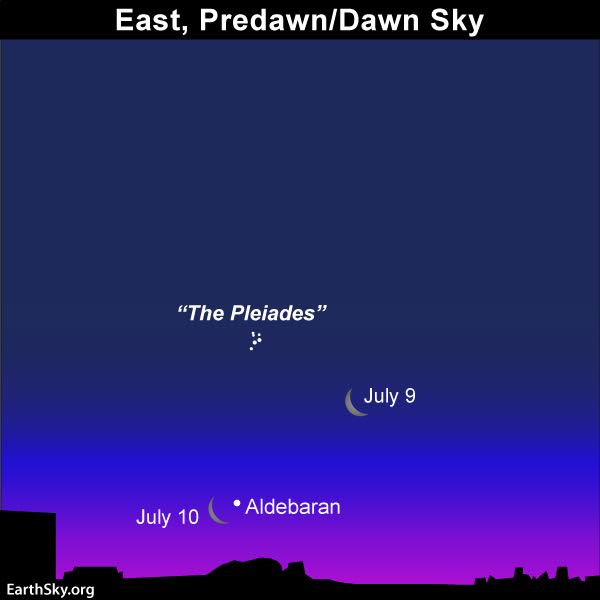 Put your coffee pot on a timer and set your alarm for a couple of hours before sunrise on July 9 and 10, 2018. You’ll want to get up early to see the beautiful gathering of the waning crescent moon, Pleiades star cluster and red star Aldebaran in the early morning sky. Look east before dawn. On July 10 – from parts of Earth – Aldebaran will undergo its last accessible occultation by the moon in this series of 49 consecutive, monthly occultations. Bob King has a good article about the occultation at SkyandTelescope.com, and he writes:

This last accessible Aldebaran occultation — the remaining two occur across the Arctic wilderness — will only be visible for observers in the Western Great Lakes region from Ontario as far west as North Dakota, Iowa, and southern Manitoba. At the western end, the Moon rises with Aldebaran already occulted, so those places will only witness the star’s reappearance, which is the best part anyway.

For the rest of us – on both July 9 and 10 – the moon’s position relative to Aldebaran and the Pleiades cluster (aka the Seven Sisters) will be somewhat different depending on your location on the globe. The charts above and below show how North Americans will view these objects in the morning sky. But everywhere worldwide, the moon will be in the same vicinity as the Pleiades and Aldebaran. The only trick, besides getting up early enough, is having a clear sky.

If you get up too late, and there’s too much dawn light to let you see the Pleiades or Aldebaran, look toward the west! You might still catch the most brilliant starlike object in the morning sky, the red planet Mars, now nearly at its brightest since 2003.

Rising times for the sun, moon and planets in your sky 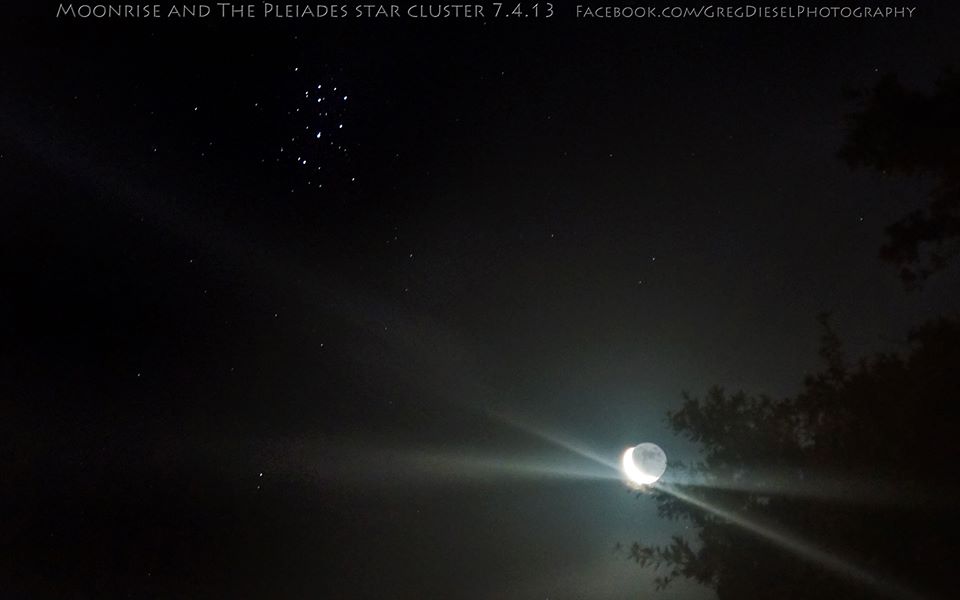 The delightful Pleiades cluster as seen through a small telescope. Image via Flickr user Dr Carl.

All over the world, the moon, the Pleiades cluster and Aldebaran light up the eastern predawn sky. Aldebaran is the brightest star in the constellation Taurus the Bull. The Pleiades cluster is fainter, especially as darkness gives way to dawn. If you have binoculars, use them. They’ll bring the Pleiades into view if you can’t see them otherwise, and, in any cases, will enhance your view of the Pleiades’ gossamer beauty.

If you aren’t familiar with the Pleiades, this little cluster will appear as a tiny starlit dipper. Most people see six or seven stars with the unaided eye, under good conditions. Depending on your eyesight and the local conditions, you might not even be able to see any stars in the Pleiades. Sometimes it just looks like a small glowing patch or cloud. Telescopically, there are hundreds of stars visible in the Pleiades cluster. In contrast to our sun, these stars are all significantly younger, larger and hotter. They are all about 400 light-years away, and are bound to each other by gravity.

Even if you are familiar with the Pleiades, or Seven Sisters, you might think the cluster is just a winter delight. The Pleiades are visible in the evening in a Northern Hemisphere winter.

Yet, like all other stars, these are to be seen in the morning sky just as much as in the evening sky, even though not at the same time of year. In fact, if you know when and where to look, the Pleiades cluster is visible to some extent every night of the year from about mid-June until early the following May, when the sun comes between us and this cluster. This is not strictly true everywhere on Earth, however, because the visibility of the Pleiades is more restricted in the Southern Hemisphere (it can’t be seen at all in Antarctica), and complicated in north polar regions due to long periods of daylight. For several weeks before and after May 20, the sun is located too close to the Pleiades along our line of sight for the cluster to be seen easily.

But for many of us in the Northern Hemisphere, the Pleiades cluster is a harbinger of cooler weather, since it is first seen in the early evening sky in October. So to view these Pleiades stars during the heat of July is a welcome confirmation that this season, too, shall change.