The parade of 5 bright planets visible in Earth’s sky tonight will conclude with the moon and Mercury rising as darkness ebbs into dawn Wednesday morning. 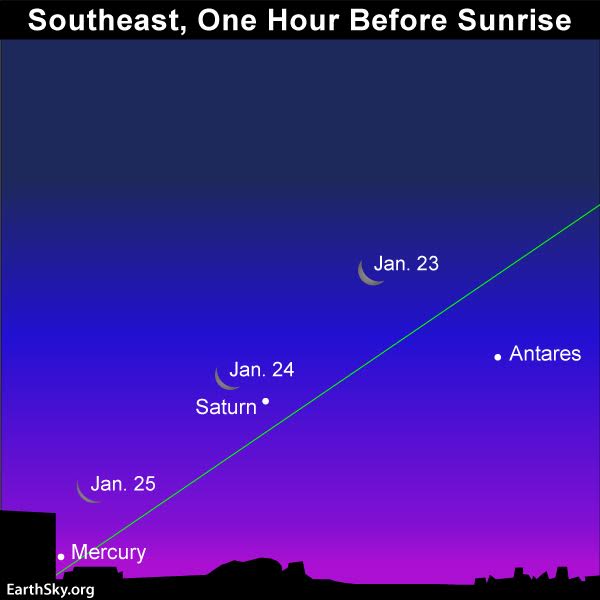 Tonight – January 24, 2017 – a grand parade of planets starts at dusk and concludes when the moon and Mercury ascend over your sunrise horizon before the sun comes up on January 25. Yes, it’ll be possible to see all the planets visible to the eye alone from Earth: Mercury, Venus, (Earth), Mars, Jupiter and Saturn. Catch the two evening planets – Venus and Mars – as soon as darkness falls. They’ll soon follow the sun below the western horizon. Jupiter rises in the east in the middle of the night and can be found high in the sky before dawn. Two strictly morning planets now – Mercury and Saturn – can be found in the east before dawn.

Venus is the first starlike object to pop out into the sky after sunset. Look in the general direction of sunset at dusk and it’ll be hard to miss this brilliant beauty of a planet. Then as dusk gives way to nightfall, watch for the red planet Mars to come out a short way above Venus.

There you go – the two evening planets! 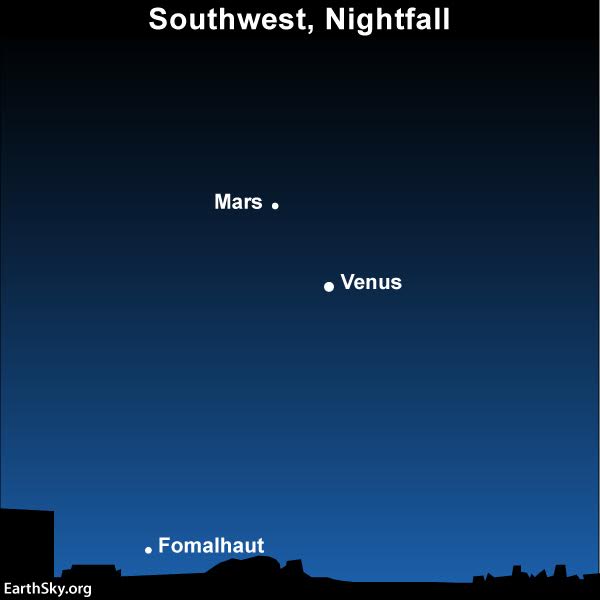 Don’t forget to view the planets Venus and Mars in the western evening sky as soon as darkness falls. They’ll set in the west not long after the sun. 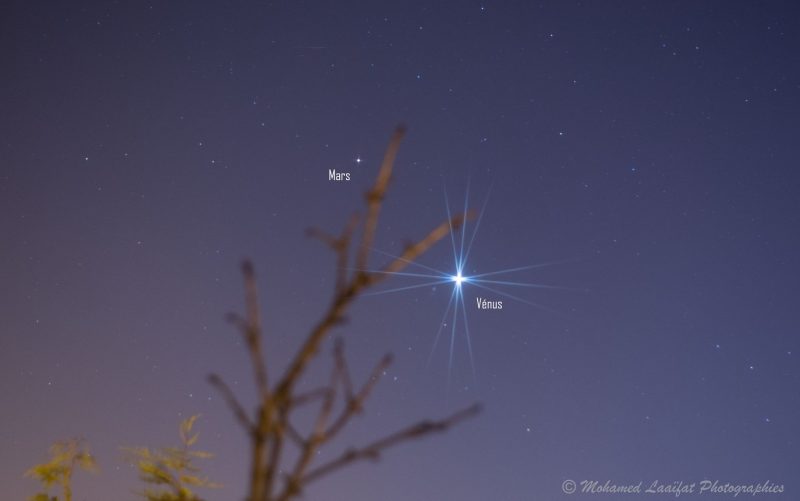 Here are brilliant Venus and fainter Mars as seen on January 21, 2017 by Mohamed Laaifat Photographies in Normandy, France.

If you’re a night owl, look over you eastern horizon to see if the king planet Jupiter (and the star Spica) has climbed over your eastern horizon before your bedtime. Click here to find an almanac giving Jupiter’s rising time.

On the other hand, if you’re an early bird, wake up before sunrise to view Jupiter (and Spica) higher up in the predawn/dawn sky. 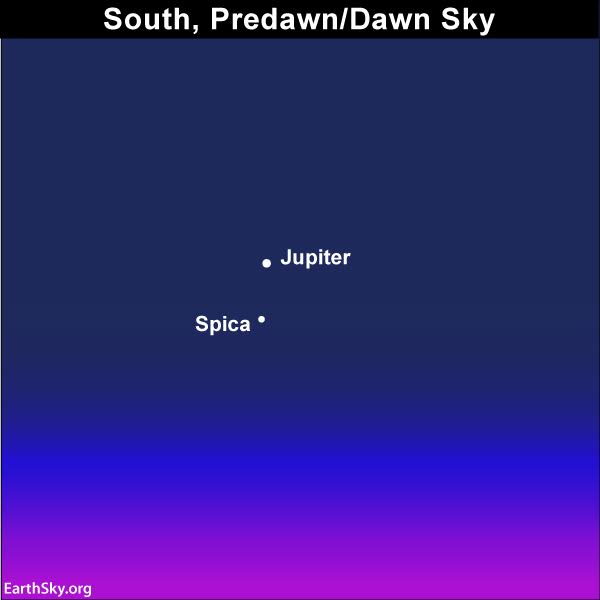 Here are Jupiter and Spica, the brightest star in the constellation Virgo. These 2 pair up in the sky for months to come. 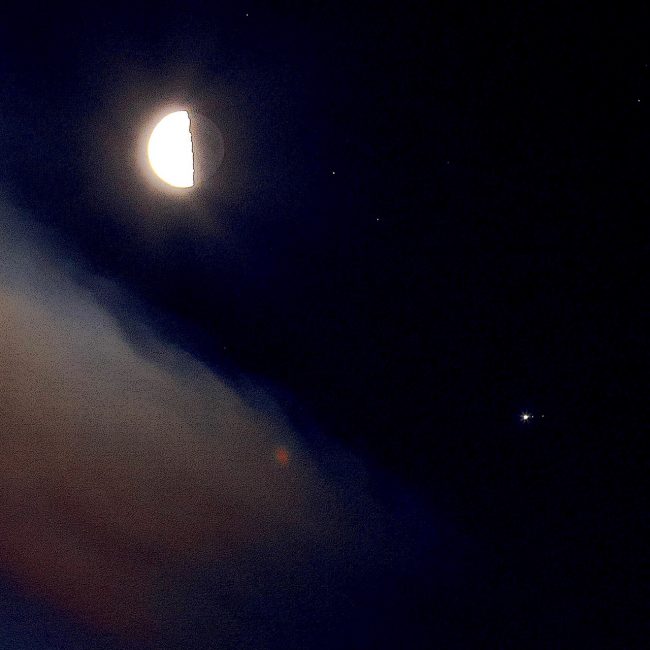 January 19, 2017 last quarter moon and bright planet Jupiter, with several of Jupiter’s moons visible, via Karl Diefenderfer in Quakertown, Pennsylvania. On the morning of January 25, the moon will be elsewhere, but Jupiter will still be the brightest starlike object in the sky from about midnight until dawn.

The most challenging planet to spot will be Mercury, but, as luck would have it – on Wednesday morning, January 25 – the moon is there to guide your eye.

Try your luck, starting not long before sunrise, say, within about an hour (more or less). Mercury and the moon will rise in the east within a short time of each other. Our chart shows them from North America, but, as seen from around the globe, Mercury will be the brightest starlike object in the vicinity of the waning crescent moon.

Just don’t wait too long, or the light of the rising sun will wash them from view! 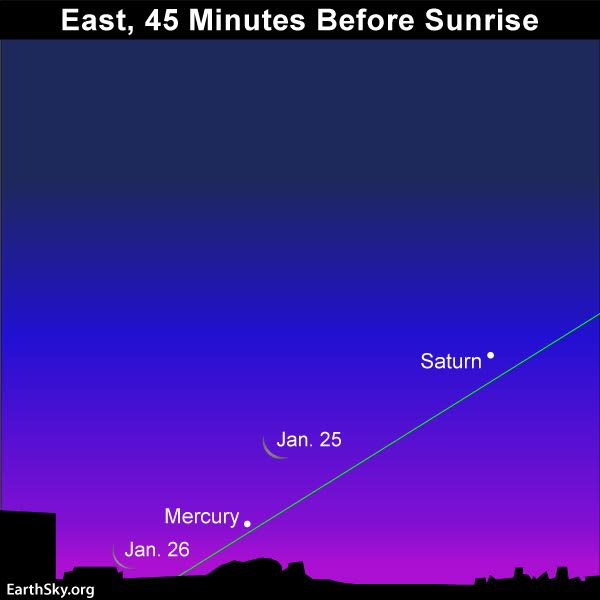 Look for the thin waning crescent moon and the planet Mercury low in the sky as the predawn darkness gives way to dawn. Who knows? Someone might even catch the moon below Mercury on January 26! The green line depicts the ecliptic – Earth’s orbital plane projected on the sky. 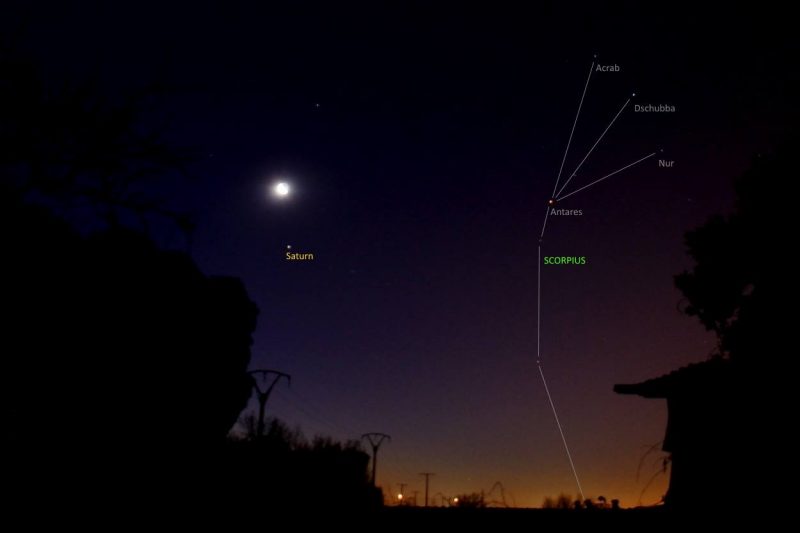 The waning moon, planet Saturn and the Crown of the constellation Scorpius the Scorpion before dawn this morning – January 24, 2017 – from Annie Lewis in Madrid, Spain, 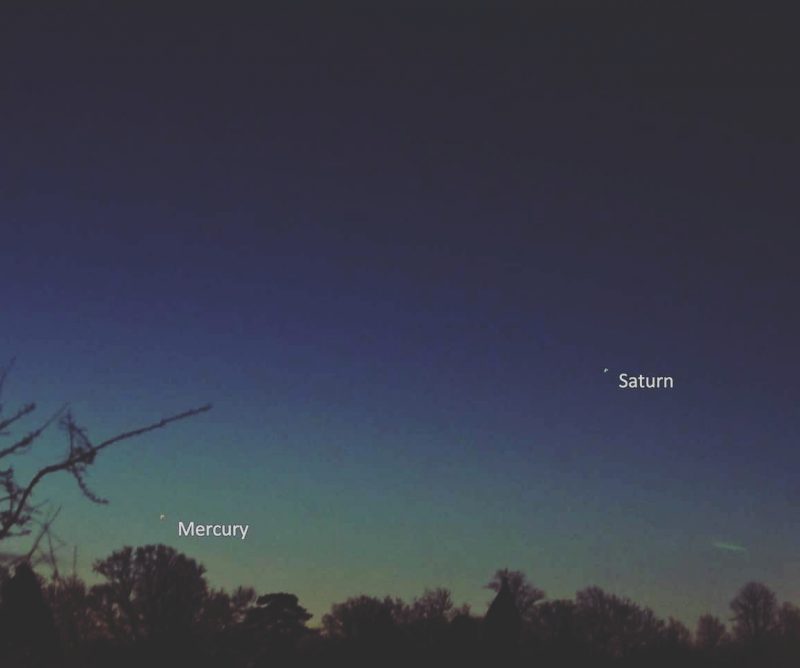 Steve Pond in England caught Mercury and Saturn on the morning of January 13, 2017. Note that Saturn appears in a darker sky, while Mercury is against a background of brighter twilight. Thanks, Steve!

Bottom line: The parade of 5 bright planets visible in Earth’s sky tonight will conclude with the moon and Mercury rising as darkness ebbs into dawn Wednesday morning.