For Southern Hemisphere, moon and Mercury before sunup April 13 and 14

Mercury is starting its best morning appearance for 2018 for the Southern Hemisphere. Northern Hemisphere? You might catch the moon on April 13 (maybe 14), but Mercury will be tougher to see. 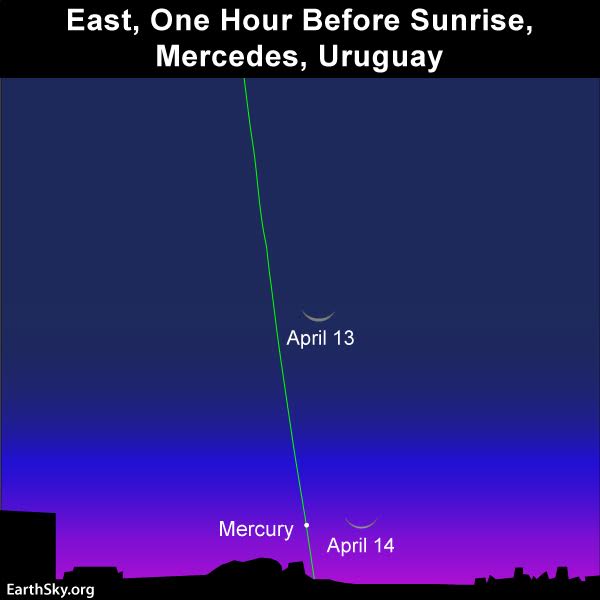 We have good news for our friends in the Southern Hemisphere. The next two mornings – April 13 and 14, 2018 – offer a grand view from your part of the world of the waning crescent moon and planet Mercury before sunrise. Our featured chart at top is designed for about 33 degrees south latitude (Mercedes, Uruguay; Cape Town, South Africa; Sydney, Australia), but other southerly latitudes are comparable.

Meanwhile, from our northerly latitudes, the view will be much tougher to see. The angle of the moon’s path with respect to the Northern Hemisphere’s sunrise horizon will be much more shallow, placing both the moon and Mercury low in the sky. Those at mid-northern latitudes might catch the thin waning crescent moon – what’s sometimes called an old moon – on the morning of April 13. Mercury might or might not be visible, even with an optical aid. On April 14, the moon will be even harder to see – difficult, if not impossible – from mid-northern latitudes. 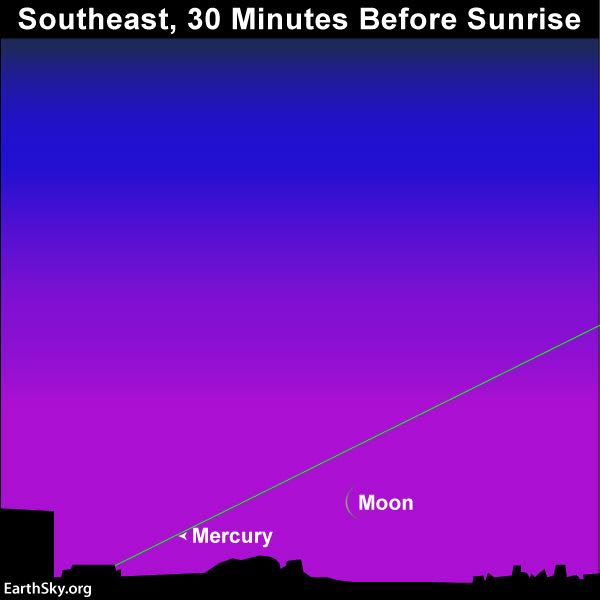 The ecliptic – pathway of the planets – hits the horizon at a shallow angle on springtime mornings. In April – when they are visible at northerly latitudes – the waning crescent moon and Mercury always appear low in the sky, in the glare of morning twilight. This chart shows the moon and Mercury as they’ll appear from the Northern Hemisphere on the morning of April 14, 2018.

No matter where you live worldwide, it’ll be to your advantage to find an unobstructed horizon in the direction of sunrise. That’s especially true if you’re in the Northern Hemisphere. Binoculars are always a plus, and they’re likely necessary from the Northern Hemisphere. Mercury is only of second-magnitude brightness right now. By this month’s end, when Mercury reaches its greatest western (morning) elongation from the sun, it’ll be about four times brighter than it is at present.

On April 13 – from Mercedes, Uruguay, South America – the moon rises about two hours and 40 minutes before sunrise. Meanwhile, Mercury comes up nearly one hour and 30 minutes before the sun. One day later, on April 14, the moon rises about one hour later whereas Mercury comes up about five minutes sooner. At similar latitudes in the world’s Eastern Hemisphere (Cape Town, South Africa, and Sydney, Australia), Mercury rises at a similar time before sunrise, but the moon comes up somewhat sooner than it does in Mercedes, South America.

Click here for recommended sky almanacs; an almanac can give you the rising times of the moon and Mercury in your sky.

At mid-northern latitudes, Mercury sits in the glow of morning twilight throughout the months of April and May.