Moon and planets before sunup February 9 to 11

Now the moon has moved in the predawn sky. You’ll find it moving past the planet Mars – toward Saturn – on the mornings of February 9 to 11, 2018.

Now the waning moon has swept past Jupiter, and – on the mornings of February 9 to 11, 2018 – it’ll pass Mars and Saturn. You’ll find the planets in the southeast as viewed from the Northern Hemisphere (closer to due east from the Southern Hemisphere).

The king planet Jupiter is not shown on the chart at top, but you can see it in the photos below, or click back to this chart. And – in the early morning sky – you’ll find bright Jupiter to the west of Mars and Saturn.

Both Jupiter and Saturn outshine Mars at present. Jupiter, the brightest morning planet, shines about 17 times more brightly than Mars; and Saturn, the most distant world that you can easily see with the eye alone, shines a bit more than one and one-half times brighter than the red planet Mars in early February 2018. The moon will be closest to Saturn Sunday morning, February 11, by the way. 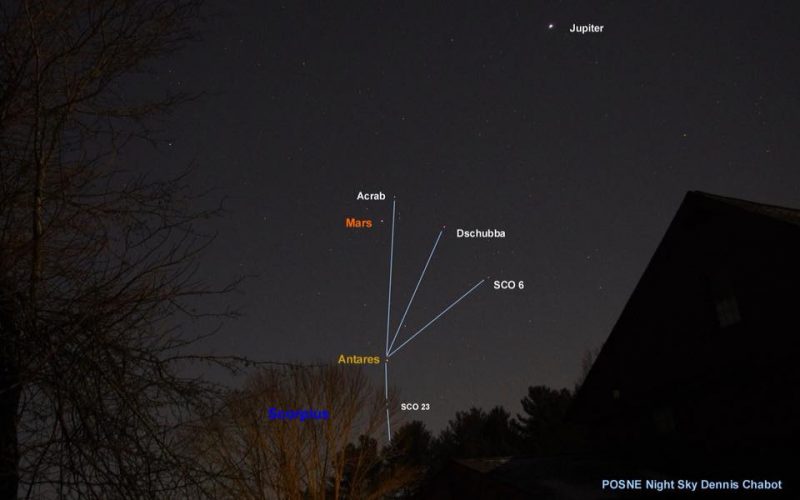 Jupiter and Mars on February 3, 2018, by Dennis Chabot of POSNE Night Sky. Mars is at the top of the constellation Scorpius, near a little arc of 3 stars known as the Crown of the Scorpion. 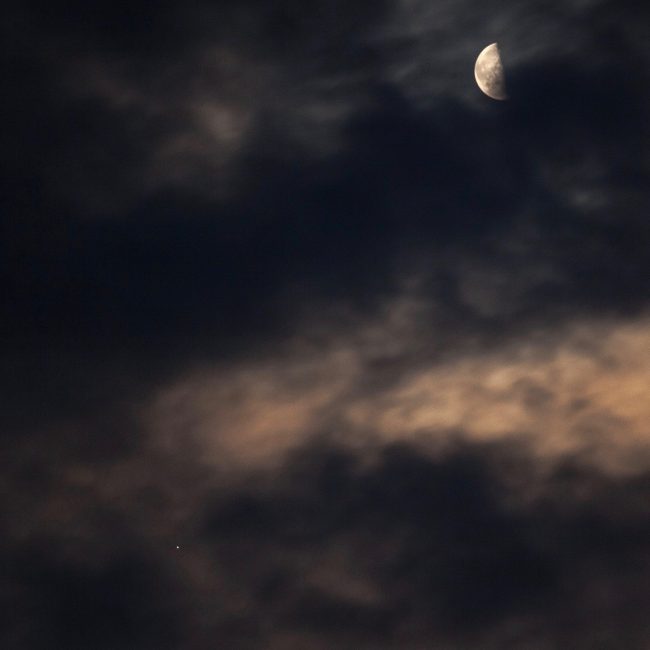 Susan Jensen in Odessa, Washington, caught the moon sweeping past Jupiter (lower left) on the morning of February 7, 2018. She wrote: “This beautiful sky greeted me as I turned off my alarm this morning. The clouds were moving through and the scene was changing quickly …”

A bright red star – Antares, brightest star in the constellation Scorpius the Scorpion – is also nearby.

The name Antares is derived from the ancient Greek term which roughly translates to like Ares, because the ruddy color of this red supergiant star mimics that of the red planet Mars (the Greek Ares or Roman Mars).

You’ll have an excellent chance to contrast the red star Antares with the red planet Mars in the February 2018 morning sky. It’s often said that stars tend to twinkle while planets shine more steadily. Look to see if this general rule holds true.

Also, notice the brightness of these two objects. They’re about equally bright now, but Mars might look brighter than Antares by February’s end. Mars is going to have a spectacular year in 2018. Start watching it now, and see it get brighter than Antares, or Saturn – or even Jupiter – by late July. 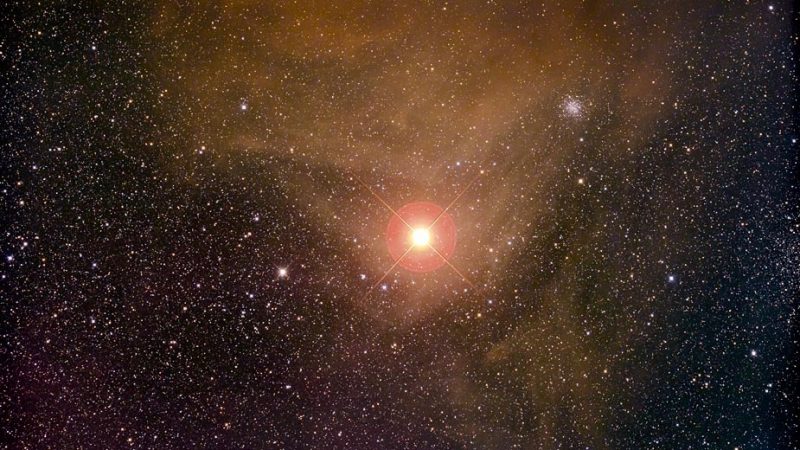 The bright red star Antares, middle, near the prominent star cluster M4, upper right. In early February 2018, Mars and Antares are about equally bright, both shining at 1st-magnitude brilliance. Mars may slightly outshine Antares by the month’s end. Photo via Fred Espenak at AstroPixels. Used with permission.

Mars will brighten considerably over the months ahead. It’ll match Saturn in brightness in a little over a month from now. Mars will go on to have a conjunction with Saturn on April 2, 2018.

By July 2018, Mars will exceed Jupiter in brightness! 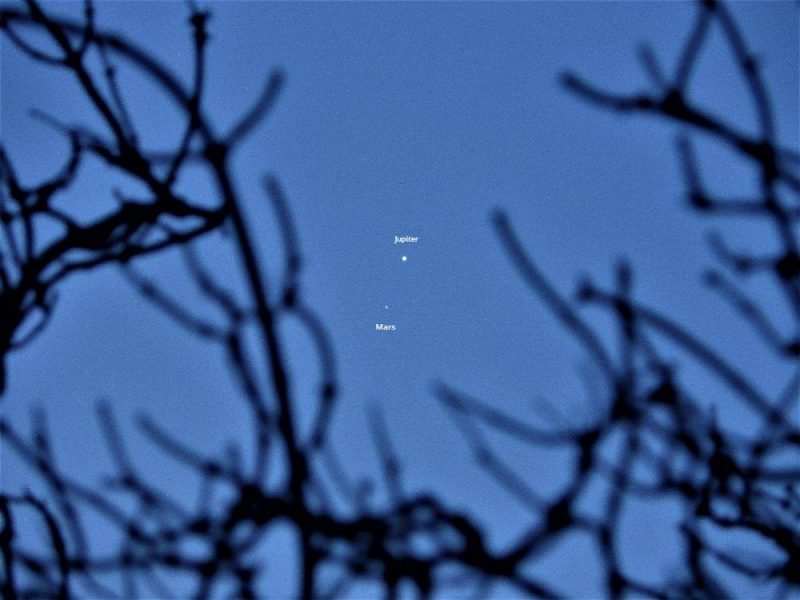 Deirdre Horan captured Jupiter and Mars from Dublin, Ireland, around the time of their early 2018 conjunction. Then Jupiter was much brighter than Mars. But, by July 2018, Mars will be brighter than Jupiter.

The moon and the planets of the solar system are always found on or near the ecliptic – Earth’s orbital plane projected onto the celestial sphere. That’s because the moon orbits the Earth, and the planets orbit the sun, on nearly the same plane that Earth circles the sun.

The change of the moon’s position from day to day is due to the moon’s orbital motion around Earth. The moon revolves around Earth in the same direction that Earth rotates on its axis: from west to east. On the average, the moon travels some 13 degrees per day in front of the constellations of the zodiac. For reference, the moon’s diameter spans 1/2 degree and your fist at an arm’s length approximates 10 degrees. 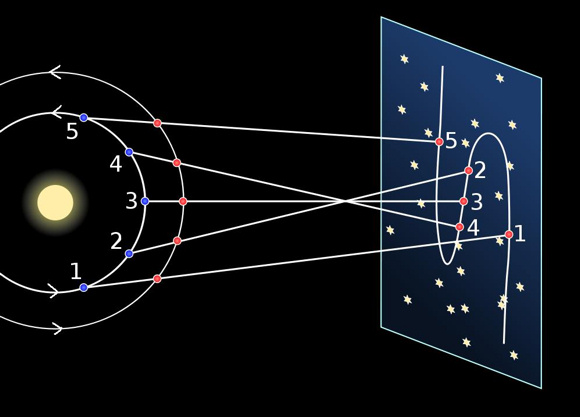 Bird’s-eye view of the north side of the solar system. From this perspective, the planets revolve counterclockwise around the sun. Every year, as our faster-traveling Earth passes a slower-moving outer planet, that planet appears to go westward relative to the background stars for a few months, centered on that planet’s opposition. This is retrograde motion. Image via Wikipedia.

Unlike the moon, the superior planets do move in a retrograde fashion (westward in front of the stars) for a few months each year, as Earth sweeps between them and the sun. You can watch the three planets now in the morning sky – Mars, Jupiter and Saturn – travel in retrograde later this year.

As Earth passes by these outer planets in our smaller and faster orbit, these worlds will appear to go westward in front of the stars. Around the middle of retrograde, a superior planet reaches opposition and shines at its brightest best in Earth’s sky.

Bottom line: Now the moon has moved past Jupiter in the predawn sky. You’ll find it moving past the planet Mars – toward Saturn – on the mornings of February 9 to 11, 2018.