Moon and Leo from midnight until dawn

Get up before dawn to see the moon near Regulus, the brightest star in the constellation Leo the Lion, on November 19 and 20, 2019.

By the morning of November 19, 2019, we’ll be just one day past the peak of the Leonid meteor shower. The 2019 peak was mostly drowned in bright moonlight, and – if you look outside before dawn in the next few days – you’ll see the moon is moving directly in front of the Leonids’ radiant point, in the constellation Leo the Lion. You likely won’t see the moon and Regulus, Leo’s brightest star, before your bedtime Monday night. Watch for them before dawn this week. The moon and constellation Leo will be highest up for the night at or near dawn.

On the morning of November 19, the moon will be at or near its last quarter phase, and the lighted portion of the moon will be pointing toward Regulus. In a day or two, depending on where you live worldwide, the moon will pass Regulus, and then its lighted side will point away from Regulus and toward Spica, the constellation Virgo’s brightest star, as shown on the sky chart below. Spica should be pretty easy to see on these mornings because it rises before dawn’s first light. 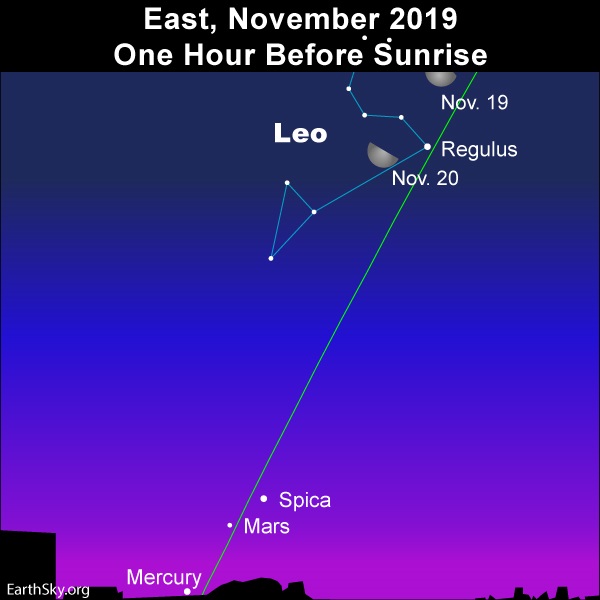 This chart shows a greater expanse of sky than most of our sky charts do. The lit side of the moon points in the direction of Spica, the constellation Virgo’s brightest star, and the planets Mars and Mercury.

Once you find Spica, see if you spot the planets Mars and Mercury lurking beneath Spica with either the eye alone or binoculars. Mars is about half as bright as Spica, whereas Mercury is actually a bit brighter than Spica. But Mercury doesn’t rise until after the break of dawn, so it may be hard to spot this world in the glow of morning twilight on November 19 and 20. Day by day, however, Mercury will not only rise earlier before sunrise but will brighten as well, so Mercury may be yours to behold some morning soon.

The green line on our sky charts represents the ecliptic – Earth’s orbital plane projected onto the constellations of the zodiac. Because the planets orbit the sun, and the moon orbits Earth, on nearly the same plane that Earth circles the sun, the moon and planets are always found on or near the ecliptic. If you’re an early bird, waking up before the sun, then use the moon, the star Regulus and the star Spica to help you envision the ecliptic with the mind’s eye, and to find Mars and Mercury. 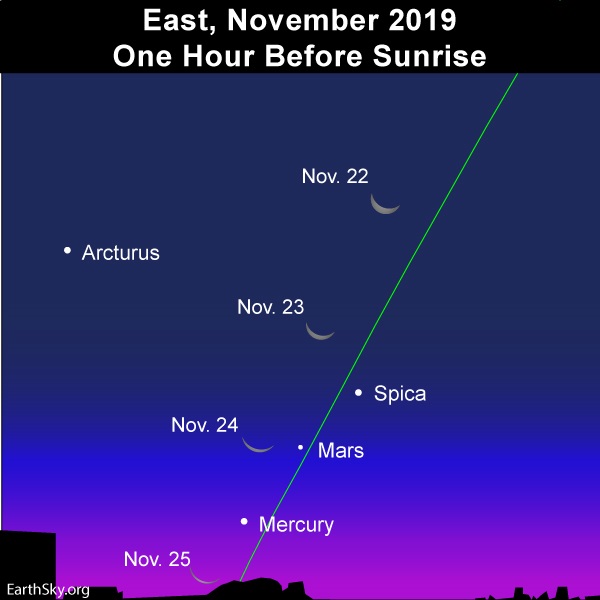 Regulus is the only first-magnitude star to sit almost squarely on the ecliptic, which – as alluded to before – marks the annual path of the sun, and approximate monthly path of the moon. The orbital planes of all the solar system planets pretty much align with the ecliptic.

In our day and age, the sun’s yearly conjunction with Regulus happens on or near August 23. That’s about two months after the June solstice, or about a month before the September equinox. 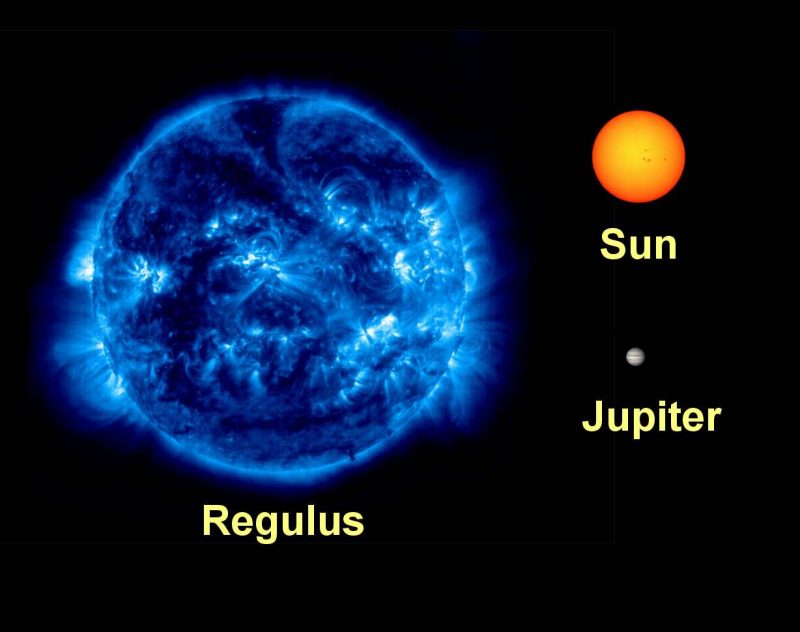 When you see Regulus near the moon on the mornings of November 19 and 20, 2019, remember … it’s a much larger star than our sun. Image via The Night Sky Guy.

Bottom line: See the waning gibbous moon near Regulus from around midnight until dawn. Then watch over the coming mornings as the moon moves past Regulus and toward the star Spica plus the planets Mars and Mercury.