Jupiter is the brightest object near the moon on all of these nights. You’ll also notice a bright star, Spica in the constellation Virgo, nearby. 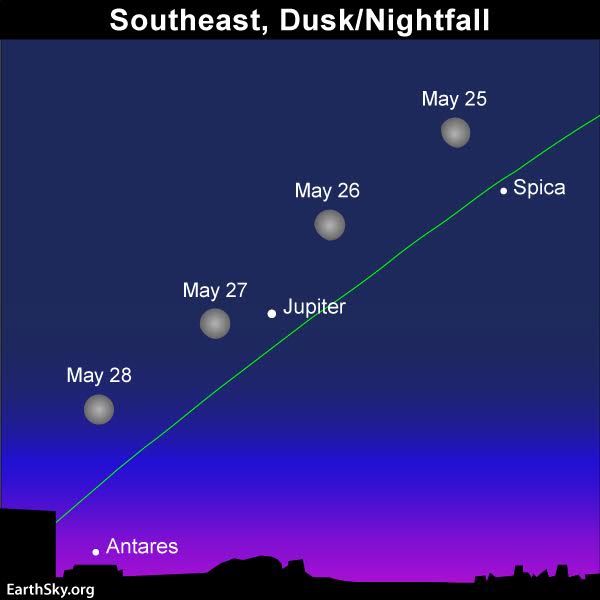 On May 25 to 28, 2018 – if you have a clear sky – you’ll surely notice a very bright “star” near the moon. This object is really a planet, Jupiter. Once Venus sets in the west, not long after the sun, the moon and Jupiter are the two brightest objects in the nighttime sky.

On some of these nights, you might notice a fainter true star, still one of our sky’s brightest stars, Spica – in the moon’s glare. Spica is the brightest star in the constellation Virgo the Maiden, and it’s a key star of the zodiac. Though a 1st-magnitude star, Spica is some 20 times fainter than Jupiter. But Jupiter’s brightness stems from its relative nearness to Earth, while Spica is a distant star, some 262 light-years away.

Spica’s magnitude is virtually the same as that of Antares, another key star of the zodiac. Want to compare them, but don’t know how to recognize Antares? Jupiter resides roughly midway between these two bright stars, and the moon will travel close to Antares on the sky’s dome on May 28, as shown on the sky chart above.

Thus it’s no accident that Jupiter is close on the sky’s dome to this nearly full moon around now. Both Jupiter and the moon are, more or less, opposite the sun.

The planets in our solar system in late May 2018. The sun is the yellow ball at the center. Earth is the 3rd planet, and Jupiter is the 5th planet, from the sun. Earth passed between Jupiter and the sun on May 9, and then Jupiter was directly opposite the sun in our sky, rising at sunset. Now we’re offset from that sun-Jupiter line a bit, but Jupiter is still ascending in our eastern sky as the sun descends below our western horizon. Image via Fourmilab.

Two months from now – on July 27, 2018 – it’ll be Mars’ opposition, its first opposition in two years and its best one since 2003. Jupiter is brighter than Mars now, but just wait! From about July 7 to September 7, 2018, Mars will supersede Jupiter in brightness … and it’ll shine with a red color!

In fact, in late July, Mars will shine better than 30 times brighter than stars like Spica and Antares, two of the brightest stars in our sky.

You can see Mars tonight, if you’re willing to stay up late or wake up early. It’s a noticeably bright “star” in the sky before dawn, near another planet, Saturn. 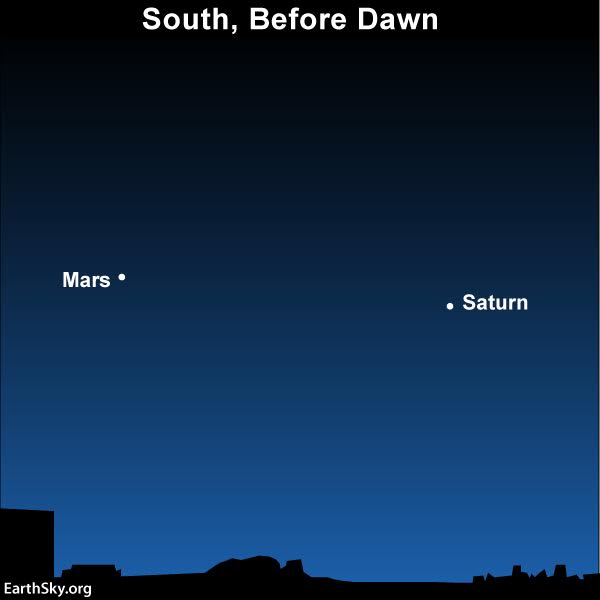 Get up before dawn to see the planets Mars and Saturn. Read more.

Jupiter is truly the giant world of our solar system. In fact, Jupiter’s volume is greater than 1,300 Earths or 66,000 Earth-moons!

Jupiter is also some 318 times more massive than our planet Earth. The king planet is more than twice as massive as all the other solar system planets, dwarf planets, minor planet and moons combined.

Think about that as you see this great planet in the moon’s glare in the coming nights! 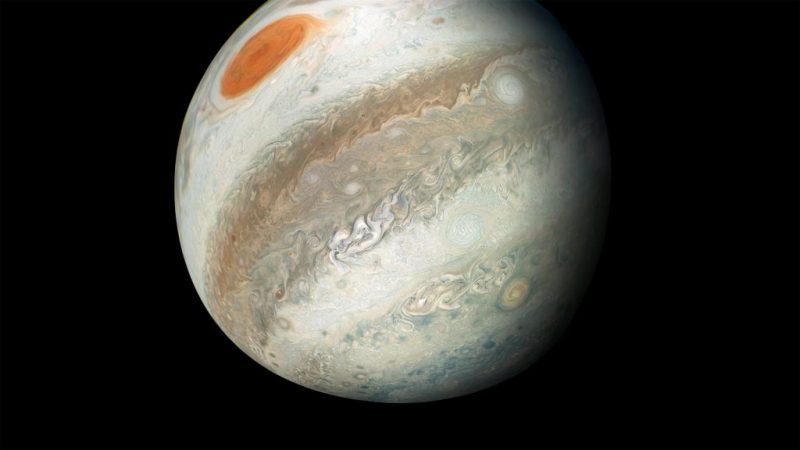 View larger. | As the Juno spacecraft swung away from Jupiter’s south pole following its close approach on April 1, 2018, it acquired the images to create this composite. Image via NASA/SwRI/MSSS/Gerald Eichstädt/Seán Doran. Read more about this image.

Read more: Antares is the Heart of the Scorpion