The next few mornings will be a grand time to watch the moon near the very bright planet Jupiter. They’ll be visible from around the world. Look east before dawn. 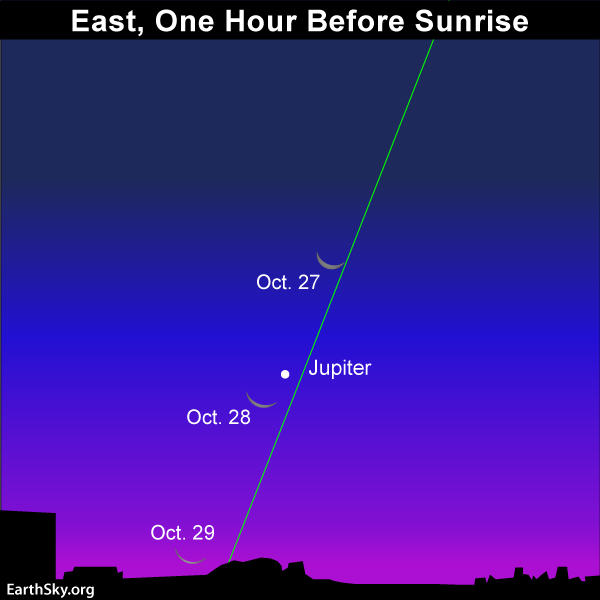 Over these next few mornings, the moon and Jupiter will be visible from around the world. On October 27, the waning crescent moon will rise first and the planet Jupiter will follow the moon over the eastern horizon shortly before dawn (roughly two hours before sunrise) at mid-northern latitudes. From temperate latitudes in the Southern Hemisphere, Jupiter rises as darkness gives way to dawn (roughly an hour before sunrise).

That’ll be interesting to see, but not necessary in finding the giant planet. Jupiter shines as the second-brightest object – after the moon – in the early morning sky now.

If you live at mid-northern latitudes and farther north, you can also see the brilliant star Arcturus to the north (left) of the moon and Jupiter before sunrise October 27. 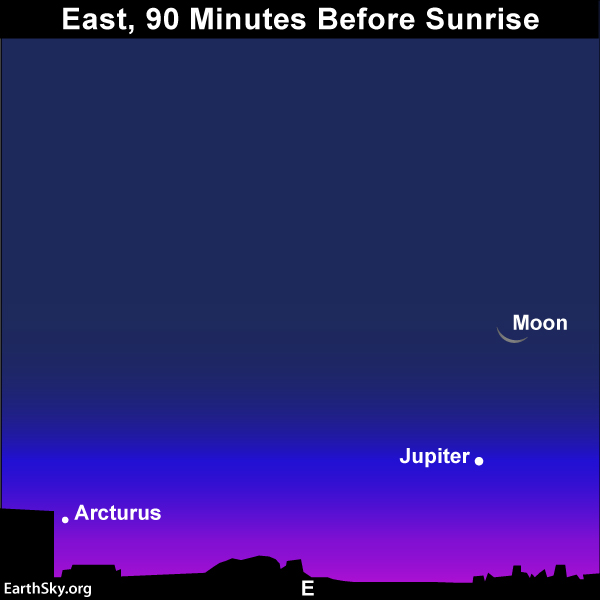 As you stand facing east, looking at the moon and Jupiter on October 27, look for Arcturus on the left.

Arcturus is not visible at all from the Southern Hemisphere at this time of year. Moreover, this star’s double appearance in the evening and morning sky is difficult to view from the northern tropics.

Still, it’s interesting … and due to the fact that Arcturus is located so far north on our sky’s dome. 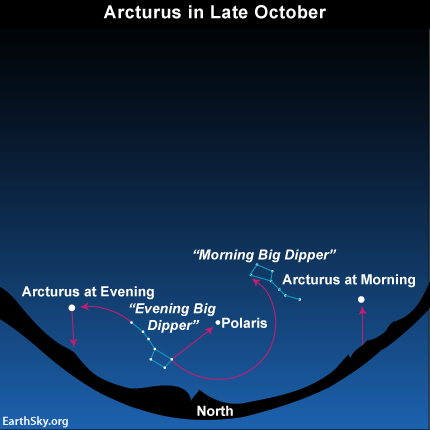 At northerly latitudes, Arcturus sets in the west after sunset and rises in the east before sunrise in late October. Read more.

Now – if we can switch entirely to the west after sunset …

Venus is the bright object shining there. It’ll continue to shine as the “evening star” for the rest of this year. It’s very interesting to see bright Venus in the west after sunset, and nearly-as-bright Jupiter in the east before dawn. Jupiter ranks as the four-brightest celestial body after the sun, moon and Venus. So these two worlds – Venus and Jupiter – are really very, very bright and they are anchoring opposite sides of the sky right now.

Plus there are two other planets in the sky at nightfall, as shown on the chart below. 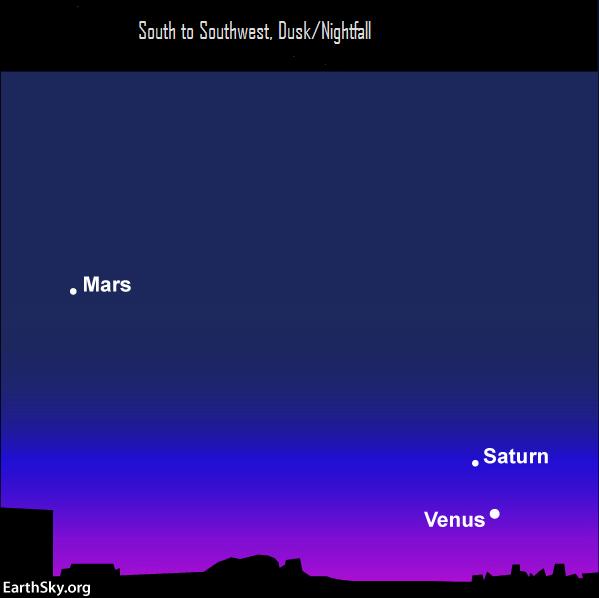 Venus is by far the brightest of the 3 planets in the evening twilight sky, but Saturn and Mars are up there, too.

Bottom line: If you don’t spot the moon and Jupiter tomorrow morning, on October 27, 2016 try again the following day, October 28, as the morning couple snuggles up more closely.