On May 19 and 20, 2019, watch for the moon and Jupiter to rise into your eastern sky roughly two hours after sunset.

Looking for the moon on May 19 and 20, 2019? It’s past full and so rises after sunset, about an hour after for May 19, and some two hours after on May 20. It’s a waning gibbous moon and, on these nights, it’s paired with the bright planet Jupiter. You’ll easily see the moon and Jupiter by mid-evening from around the globe (midway between your local sunset and local midnight). The moon and the king planet rank as the second-brightest and fourth-brightest heavenly bodies to light up the sky, respectively, after the sun and planet Venus.

That reddish, twinkly star near the moon and Jupiter is Antares, the brightest star in the constellation Scorpius the Scorpion. Although Antares serves as a prime example of a 1st-magnitude star, it pales next to Jupiter. which outshines Antares by nearly 30 times.

By the way, that third-brightest heavenly body – Venus – is nowhere to be found in the evening sky, so there’s no way to mistake Venus for Jupiter – or vice versa. Venus can only be seen in the morning sky, very low in the eastern sky before sunrise from Northern Hemisphere locations, a bit higher as seen from Earth’s Southern Hemisphere.

Click here for recommended astronomical almanacs that’ll tell you specifically when the sun, moon and planets rise and set in your sky. 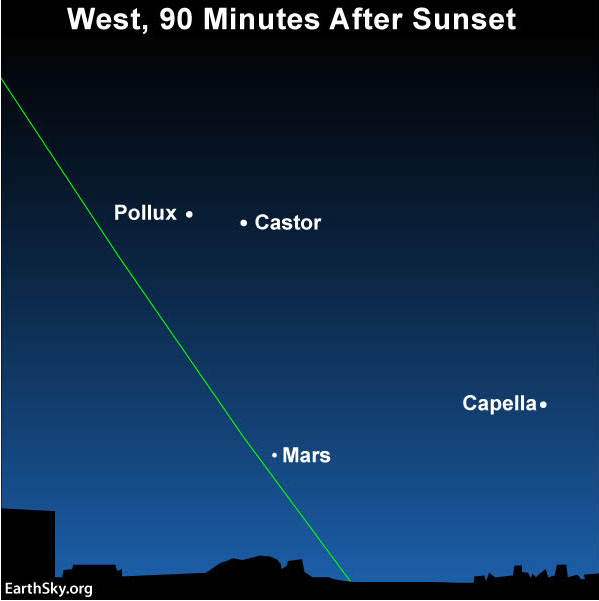 You can catch Mars at early evening, but it’s now far across the solar system from Earth and therefore only modestly bright.

For the most of the year, the red planet Mars has been the lone bright planet to adorn the evening sky. But Mars is no brighter than a 2nd-magnitude star right now and is fading in brightness as we speak. Mars appears rather low in the west at nightfall and early evening, and sets shortly thereafter. Mars sets in the west shortly after Jupiter rises in the southeast. Given an unobstructed horizon, it might be possible to see both planets at the same time at early evening.

It won’t be long before Jupiter takes over as the evening “star” and Mars fades from view. Some three weeks from now – June 10, 2019 – Jupiter will be at opposition (opposite the sun in Earth’s sky). Because Jupiter is a superior planet – a planet orbiting the sun outside of Earth’s orbit – the king planet always comes closest to Earth around its yearly opposition. At opposition, Jupiter shines at its brightest best for the year, and moreover, is out all night long, from dusk until dawn!

Opposition happens when Earth flies between an outer planet, like Jupiter, and the sun. Illustration via Heavens Above.

Bottom line: Use the moon to locate Jupiter on May 19 and 20, 2019. Thereafter, the moon will leave Jupiter to pair up with the ringed planet Saturn. Look for Jupiter to rise about four minutes earlier daily or 1/2 hour earlier weekly. Some three weeks from now – around June 10 – Jupiter will rise at sunset, to stay out all night long! That’ll be Jupiter’s annual opposition.