Moon sweeps past Pleiades and Aldebaran March 1 and 2

On March 1 and 2, 2020, the waxing moon is near the bright red star Aldebaran in Taurus the Bull, and the Pleiades star cluster. Dazzling Venus is nearby.

On March 1 and 2, 2020 – in the west, after sunset – the moon shines in front of the constellation Taurus the Bull. Taurus has two major signposts: the ruddy star Aldebaran, marking the Eye of the Bull, and the Pleiades star cluster, which is shaped like a tiny, misty dipper of stars. Also on these evenings, the moon’s lit side points directly at the dazzling planet Venus, which sits closer to the sunset horizon.

Given clear skies, you’ll have no trouble seeing the moon and Venus, which rank as the second-brightest and third-brightest celestial objects, respectively, after the sun. You’ll need a bit more darkness to see Aldebaran and the Pleiades on the great dome of the sky.

The Pleiades is an actual cluster of stars, sibling stars born from the same cloud of dust and gas.

Aldebaran, the brightest star in Taurus, sits atop another cluster of stars, a V-shaped assemblage that represents the Bull’s face. The stars in this V, with the exception of Aldebaran, are members of the cluster called the Hyades.

Because the Hyades are closer to us than the Pleiades, this beautiful cluster of stars appears more spread out than the compact Pleiades cluster. 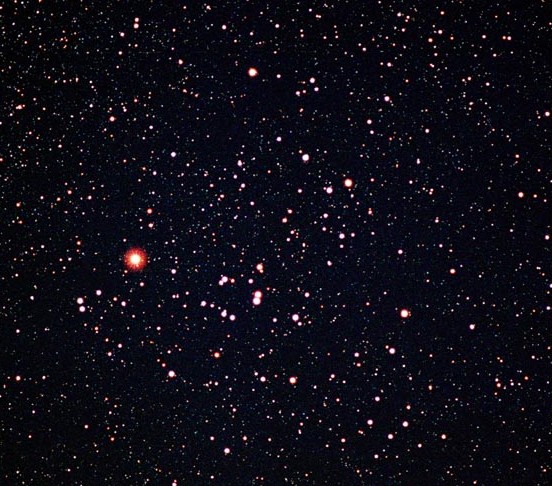 Can you make out the V in this pattern of stars? It’s easy to see the V with the eye alone, but this is a telescopic image. A telescope reveals over 100 stars in the Hyades cluster. The bright red star here is Aldebaran. Photo via astronomycafe.net.

The delightful Pleiades cluster as seen through a small telescope. Image via dr carl.

How can you be sure you’ve found Aldebaran? Orion’s Belt, at the lower left, always points in its direction. The star Aldebaran resides to the south of the ecliptic and the Pleiades star cluster to the north of the ecliptic, which is indicated by a blue line on this chart. Chart via IAU.

Now let’s focus on Venus, which now shines in front of the constellation Pisces the Fish. This whole next month, watch for Venus to travel upward, toward the constellation Taurus. In the meantime, Taurus will be sinking closer to the setting sun day by day.

Venus will swing some 2.5 degrees north of the faint planet Uranus (in the constellation Aries) to stage a conjunction on March 9. However, you’ll probably need an optical aid to view Uranus, the seventh planet outward from the sun. On a dark night, people with good vision can see Uranus as a faint speck of light.

Click here for a sky chart of Uranus via Sky & Telescope.

Venus will begin its retrograde (westward) motion in front of the background stars on May 13, 2020, and will transition out of the evening sky and into the morning sky in early June 2020. 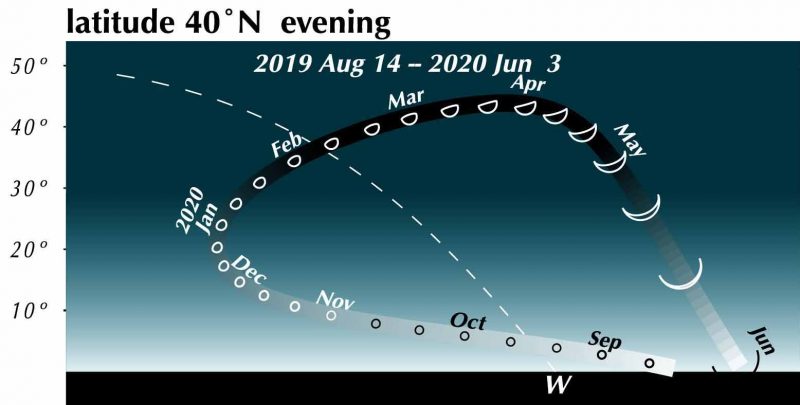 Bottom line: On March 1 and 2, 2020, the waxing moon is near the bright red star Aldebaran in Taurus the Bull and the Pleiades star cluster. Dazzling Venus is nearby.