Moon in Libra on June 6 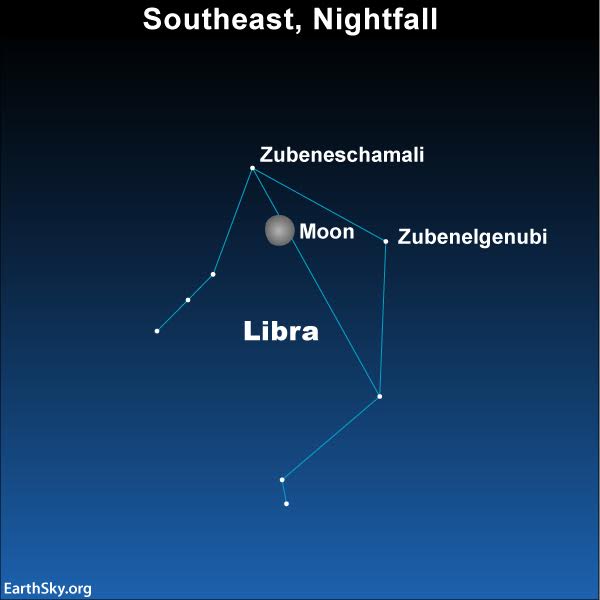 Tonight – June 6, 2017 – finds the waxing gibbous moon passing in front of the constellation Libra the Scales. Although tonight’s brilliant moon will make it very easy to locate Libra’s place in the starry sky, the drenching moonlight will make it nearly impossible to see this rather faint constellation of the zodiac. With no 1st-magnitude stars to showcase this constellation, demure Libra fades from view on this moonlit night.

However, the moon will drop out of the evening sky by around mid-month, giving you a chance to view this constellation in a dark sky. In fact, you don’t even need a pitch-black night to see Libra’s two modestly-bright stars, Zubenelgenubi and Zubeneschamali. As long as the sky is moderately dark, Libra’s two brightest stars should be fairly easy to make out.

The constellation Libra via the International Astronomical Union (IAU) is found to the west of the 1st-magnitude star Antares.

Practiced stargazers know the constellation Libra is sandwiched between two 1st-magnitude stars: Antares and Spica. Despite tonight’s moonlit glare, you might be able to spot Antares to the east of tonight’s moon and Spica to the west of the moon. If you see these stars tonight, be mindful of where Antares and Spica reside in the sky this evening, and then use these stars to star-hop to Libra later this month. 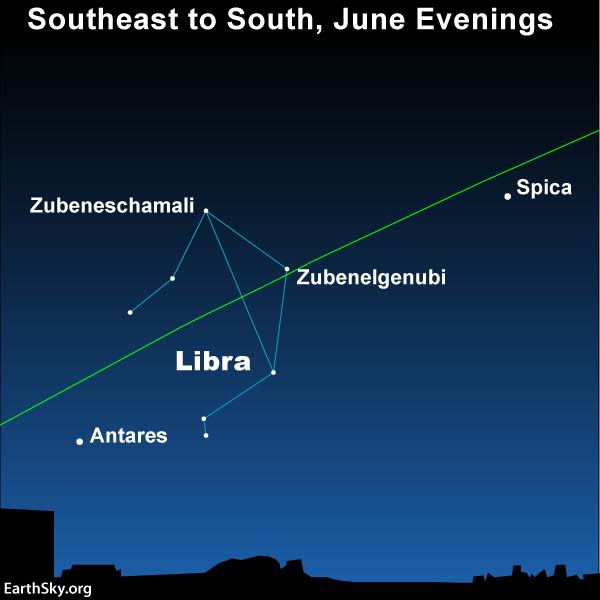 On a moonless night, look for the constellation Libra the Scales in between the bright zodiacal stars, Antares and Spica.

By the way, the star Spica is quite easy to locate at present because Jupiter, the brightest starlike object in the evening sky, lodges relatively close to Spica on the sky’s dome. But one year from now, in June 2018, Jupiter will pair up very closely with the star Zubenelgenubi. So if Libra eludes you this year, you can count on Jupiter to show you this constellation of the zodiac in 2018.

Bottom line: On June 6, 2017 use the moon to locate the constellation Libra’s place in the starry heavens.