Moon in Aquarius, near Neptune

Find the zodiacal constellation Aquarius. The moon will be there, too. Neptune can’t be seen in the moon’s glare, but it’s fun to imagine! 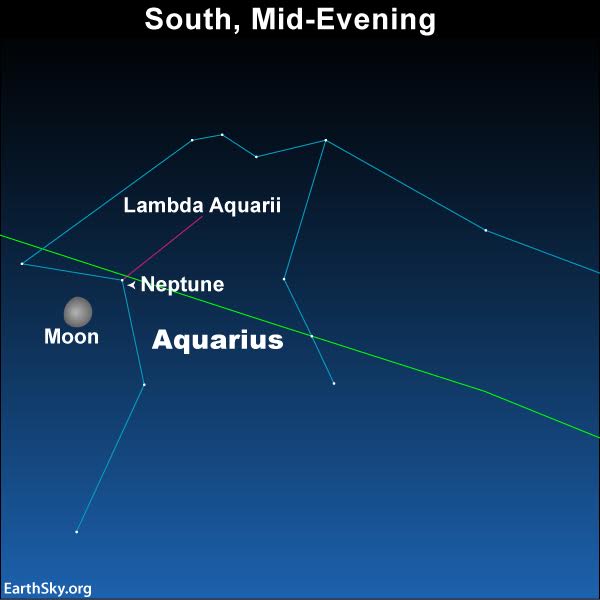 Tonight – October 30, 2017 – look for the moon and know that Neptune, the outermost of the major planets in our solar system, is near it on the sky’s dome. Just don’t expect to see Neptune. Even on the darkest of moonless nights, you need an optical aid to see it. What you can do tonight is use the moon to get a feel for the whereabouts of Neptune in our sky. Plus, you might be able to glimpse the zodiacal constellation Aquarius in the starry heavens.

Neptune lies within Aquarius’ boundaries now, and Aquarius lies to the north of the bright star Fomalhaut, which will be visible tonight – despite the moonlit glare. The sky chart of Aquarius below shows Fomalhaut as the bright (though unlabeled) star to the south of Aquarius, at a right ascension of 23 hours and a declination of -30o.

The ecliptic – roadway of the sun, moon and planets in our sky – passes right through the constellation Aquarius. Practiced sky gazers know that any planet of our solar system must reside on or near the ecliptic on our sky’s dome.

And right they are, for Neptune will be close to the 4th-magnitude zodiacal star Lambda Aquarii for the rest of this year.

Click here for a sky chart showing Neptune in front of Aquarius. 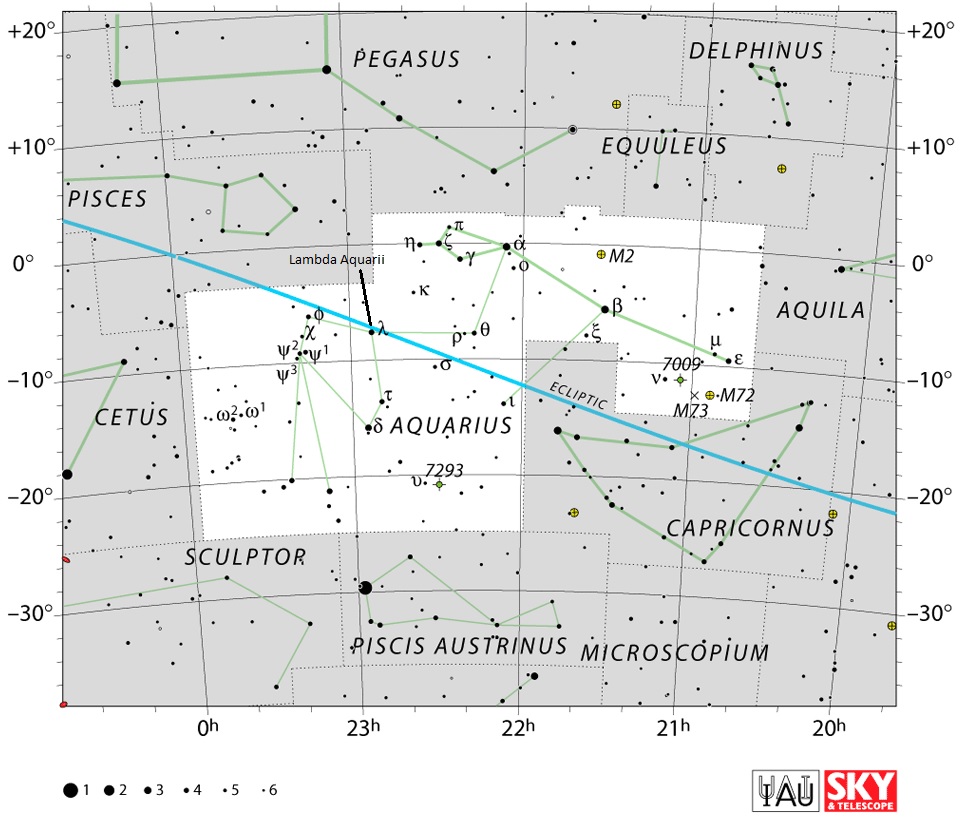 This star, Lambda Aquarii, is visible to the unaided eye as a faint speck of light in a dark country sky. This chart from skyandtelescope.com provides the telescopic field of view and can help you find Neptune … once the moon moves away.

Neptune reigns as the most distant full-fledged planet in the solar system, since Pluto was reclassified as a dwarf planet by the International Astronomical Union (IAU) in 2006.

Pluto wasn’t denied planetary status because it’s not massive enough to be a planet. Believe it or not, Pluto – in and of itself – has sufficient mass to qualify. Rather, Pluto was reclassified by the IAU because this world doesn’t have the heft to “clear the neighborhood around its orbit.”

Pluto, by the way, is locked into a 2:3 orbital resonance with Neptune. For every two times that Pluto circles the sun, Neptune circles the sun three times.

Beyond Neptune, there are a number of trans-Neptunian objects – sometimes called plutinos – that are also locked into a 2:3 orbital resonance with Neptune.

Once the moon leaves the evening sky, starting at the end of the first week of November, try locating Neptune in front of the constellation Aquarius, and near the star Lambda Aquarii. Be forewarned. You’ll need an optical aid, and probably a good sky chart plus lots of patience to see this faint and distant planet.