From much of the US, Mexico, Caribbean, Central America and southeast Canada, Aldebaran will disappear behind the moon’s lit side and reappear on its dark side. 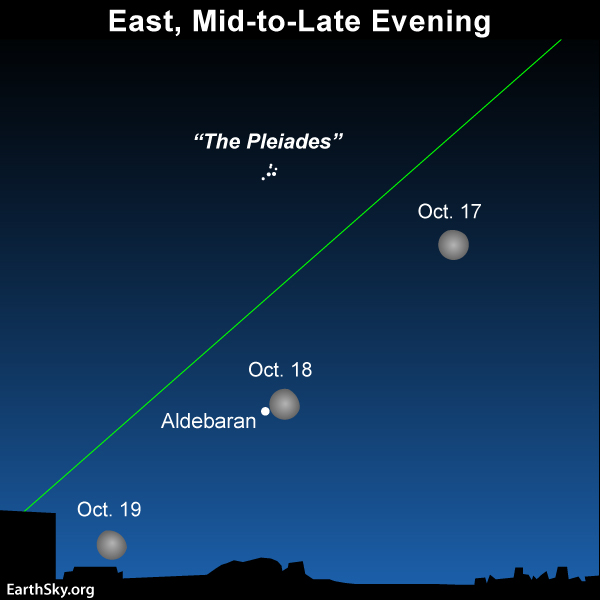 Tonight – October 18, 2016 – features the bright waning gibbous moon close to the star Aldebaran or occulting (covering over) Aldebaran. The two luminaries rise over the eastern horizon by mid-evening tonight at mid-northern latitudes – and at late night at southerly latitudes. Last night, on October 17, a larger waning gibbous moon shone closer to the Pleiades star cluster. With the moon shining so close to Aldebaran, the fiery eye of the Bull, it might be hard to spot Aldebaran in the lunar glare. If so, try blocking out the moon with your finger, and then look for the star Aldebaran. The Pleiades star cluster – also known as the Seven Sisters – will probably be even harder than Aldebaran to see in tonight’s moon-drenched sky, but you’ll enjoy them, too, if you can pick them out. 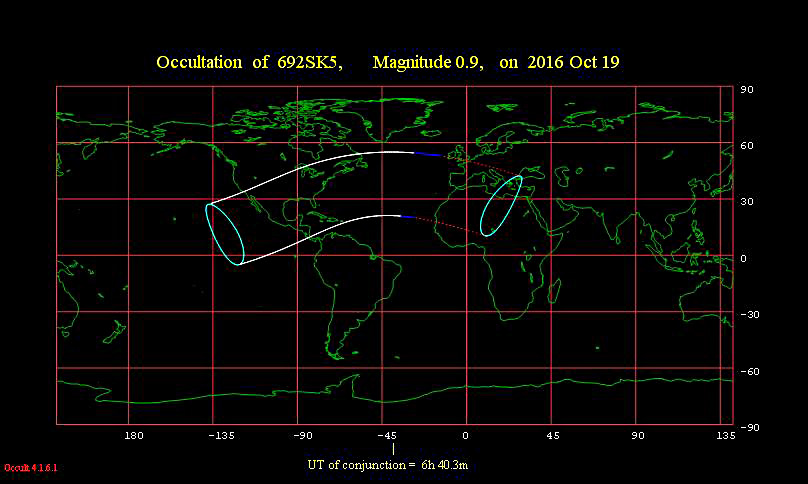 This worldwide map shows where the lunar occultation of Aldebaran is visible worldwide. Every place in between the solid white lines has the occultation taking place during the nighttime hours on October 18-19. Map via IOTA (international Occultation Timing Association).

The moon will actually occult – cover over – the star Aldebaran for a portion of the night tonight (October 18-19) from much of the United States, Mexico, the Caribbean, Central America and southeast Canada. Aldebaran will disappear behind the lit side of the moon and reappear on the moon’s dark side.

We give the occultation times for various North American localities in their respective time zones. No need to convert from Universal Time to local time!

To convert from Universal Time (UT):

If you live along the white line on the map near the top of this post, you can watch a grazing occultation, which means the star will flit in and out of view along the moon’s limb. Click here for more graze maps and information.

Aldebaran and the Pleiades star cluster return to the same place in the sky about 4 minutes earlier every night. The moon, on the other hand, rises an average 50 minutes later daily. So several days from now, after the moon has left Taurus, be sure to see the starlit Bull in all his majesty, and the star Aldebaran plus the beautiful Pleiades cluster in a moon-free sky!

Bottom line: The moon is near Aldebaran on the night of October 18, 2016. You’ll recognize the Pleiades as a tiny misty dipper. It’s sometimes called the Seven Sisters. Aldebaran will be the bright, reddish star nearby.

Arcturus is a Halloween ghost of the summer sun