Tonight’s moon is near the bright star Antares in the constellation Scorpius the Scorpion. An even brighter planet, Jupiter, is nearby. 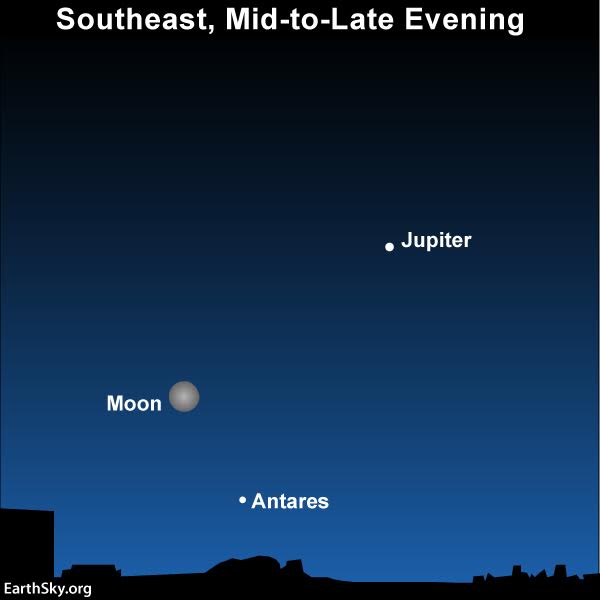 Tonight – May 1, 2018 – watch for the waning gibbous moon and the bright star Antares to climb above your southeastern horizon. The moon is now a couple of evenings past full and rising later at night. From mid-northern latitudes, the moon and Antares will be up by 10 to 11 p.m. local time (the time on your clock for much of the Northern Hemisphere). From temperate latitudes in the Southern Hemisphere, the twosome will be up 8 to 9 p.m. local time. From around the world, an even brighter object than Antares – the planet Jupiter – is nearby.

Click here for recommended sky almanacs that’ll let you know the rising time of the moon, Antares and Jupiter in your sky.

And there’s yet another bright planet you won’t want to miss, Venus. It’ll be blazing low in your western sky shortly after sunset, around the same time Jupiter will be shining low in your eastern sky. In other words, these two brilliant beauties will be shining opposite one another as dusk deepens into nighttime. These two worlds will be easy to see (given an unobstructed horizon) because Venus and Jupiter rank as the third-brightest and fourth-brightest celestial objects, respectively, after the sun and moon.

As evening deepens, Venus will sink westward while Jupiter will climb upward. Venus will follow the sun beneath the western horizon a few hours after sunset, at or near which time the moon and Antares will then follow Jupiter into the starry sky.

Once the moon and Antares enter the sky, they’ll be out (along with Jupiter) for rest of the night. If you live at northerly latitudes, and don’t wish to stay up late, you can always wake up early to see the moon and Antares in the predawn sky instead. If you do that, you can see two more planets, Mars and Saturn, as shown on the chart below: 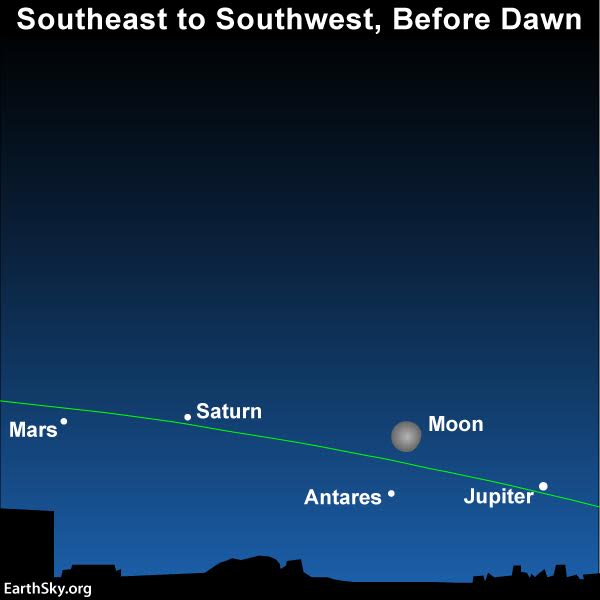 This chart covers more sky than our charts normally do, spanning about 90 degrees of horizon. Note that the moon on our charts looks much larger than it does in the real sky.

The planet Saturn follows Antares into the starry sky about two hours after Antares rises, and then the planet Mars follows Saturn into the sky an hour or two after Saturn comes up. Unless you’re a night owl, however, you’ll probably prefer to view Saturn and Mars in the early morning hours before sunrise.

The moon will continue to wane, and it’ll continue to move eastward in front of the star background in the nights ahead. Thus the moon will inevitably inch toward Saturn and Mars in our sky, passing them around May 4 to 6, as shown on the two charts below: 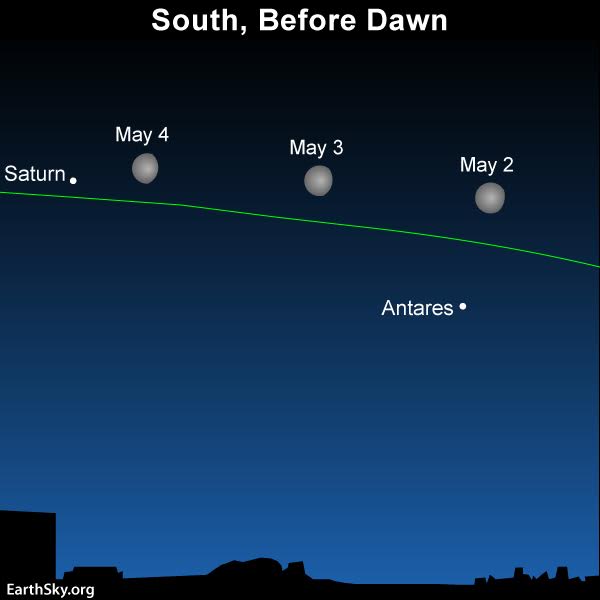 Watch the moon move eastward day by day, from the star Antares to the planet Saturn. The green line depicts the ecliptic – Earth’s orbital plane projected outward onto the celestial sphere – and hence the path of the sun, moon and planets across our sky. 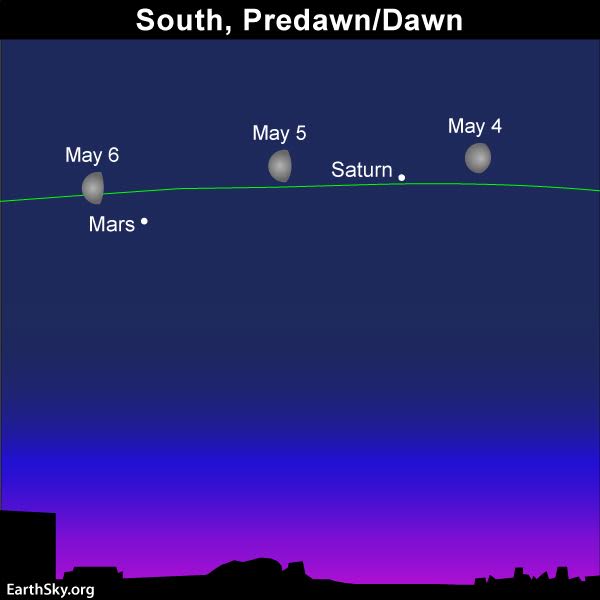 The moon will be closest to Saturn in the morning sky on May 4 and Mars on May 6. Read more.

Bottom line: On May 1, 2018, the bright star near the moon is Antares in the constellation Scorpius the Scorpion. An even brighter planet, Jupiter, is nearby.