Up for a sky watching challenge? Try catching the star Antares and the planet Saturn near the old waning crescent moon before sunrise on December 26 and 27. 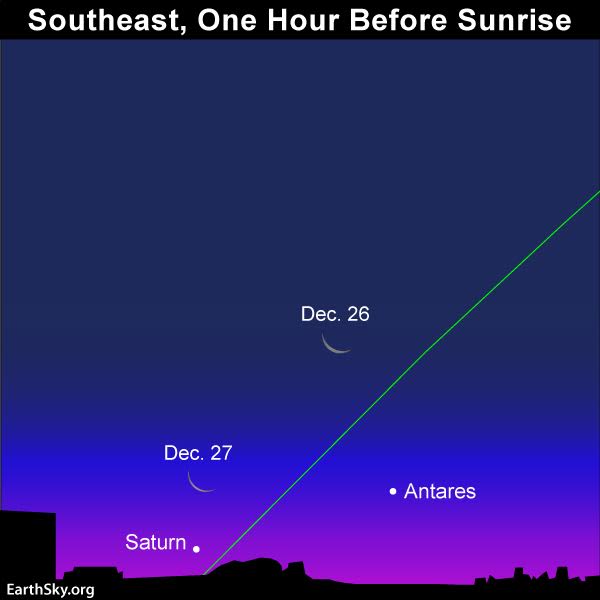 Before dawn tomorrow – December 26, 2016 – you can also easily see the king planet Jupiter high up in the morning sky. The big challenge will be to catch the star Antares and the planet Saturn and in the vicinity of the slender waning crescent moon in the predawn sky over these next two mornings (December 26 and 27). 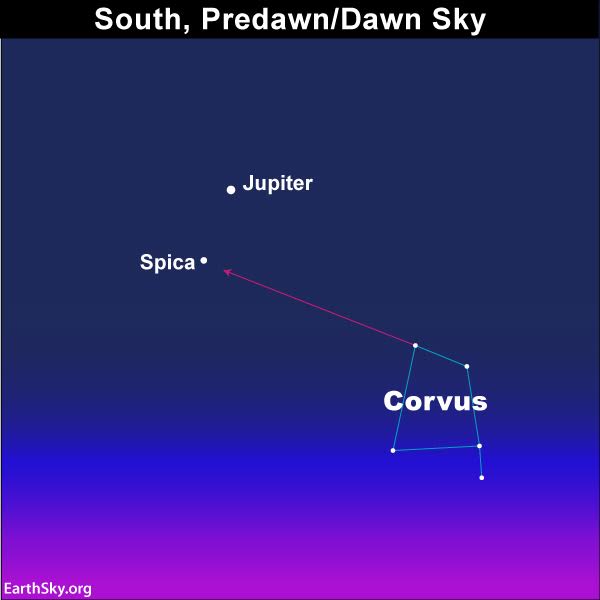 On these December 2016 mornings, the dazzling planet Jupiter is high in the sky when dawn breaks, near the star Spica on the sky’s dome.

Tomorrow, before dawn’s first light, Look eastward for the old moon rather close to the sunrise point horizon. You might even note the earthshine – sunlight reflected from Earth and back to the moon, softly illuminating the moon’s nighttime side. The lunar terminator – shadow line dividing the lunar day and night – shows you where the sunset stretches across the lunar terrain.

Have binoculars? Scan the terminator for your best three-dimensional views of the lunar landscape. Binoculars may also come in handy for seeking out Antares and Saturn in the glow of morning twilight.

Afterwards, Saturn follows Antares into the sky about half an hour later at mid-northern latitudes; and in the Southern Hemisphere, Saturn rises about an hour after Antares does. Click here for an almanac telling you the rising times of the moon, Antares and Saturn into your sky.

The Southern Hemisphere has the advantage when it comes to viewing Antares in the morning sky because this ruddy star resides south of the ecliptic – the green line on the feature sky chart above.

Day by day, Antares and Saturn will be rising sooner and sooner before sunrise. In another few weeks, the twosome should be fairly easy to catch in the early morning sky. But, for now, use the moon to find the star Antares and the planet Saturn, the farthest world that you can easily see with the unaided eye.

By the way, if you’re looking for evening planets … Venus and Mars are still in the evening sky, near the setting sun.

Bottom line: Up for a sky watching challenge? Try catching the star Antares and the planet Saturn near the old waning crescent moon before sunrise on December 26 and 27.