After sunset on October 3, 2016, look for the slender waxing crescent moon to pair up with Venus, the “upside-down” world. 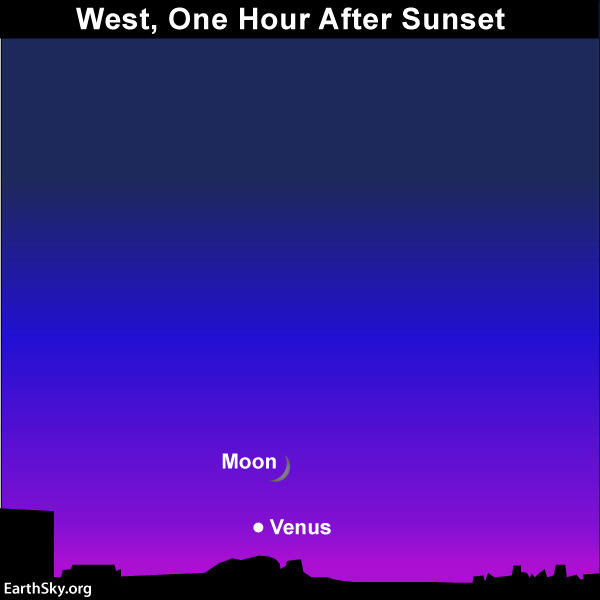 Tonight – October 3, 2016 – look westward at dusk and nightfall to view the brightest and second-brightest heavenly bodies to adorn the nighttime sky, the moon and dazzling planet Venus. Unlike the stars, these worlds don’t shine by their own light but by reflecting the light of the sun.

Carefully scan the nighttime side of the moon with either the unaided eye or binoculars to see the moon’s dark side softly illuminated by earthshine. Earthshine is actually twice-reflected sunlight, of sunlight reflected from Earth to the moon, then from the moon back to Earth.

Many people are aware that Earth’s rotational axis is titled by about 23.4o out of vertical to plane of the ecliptic – our planet’s orbit around the sun. Unlike Earth, Venus’ axis is almost vertical to its orbital plane, only tilting 2.6o out of straight up and down. Even so, Venus is sometimes called an “upside-down” planet.

However, the planet Venus stands as a major exception. If you could observe Venus from the north side of the solar system, you’d see that it rotates clockwise even as it orbits the sun counterclockwise. Since astronomers like to call the hemisphere of a planet that rotates counterclockwise the planet’s North Pole, Venus’ rotational axis is said to be titled at 177.4o instead of 2.6o, making Venus an “upside-down” world. 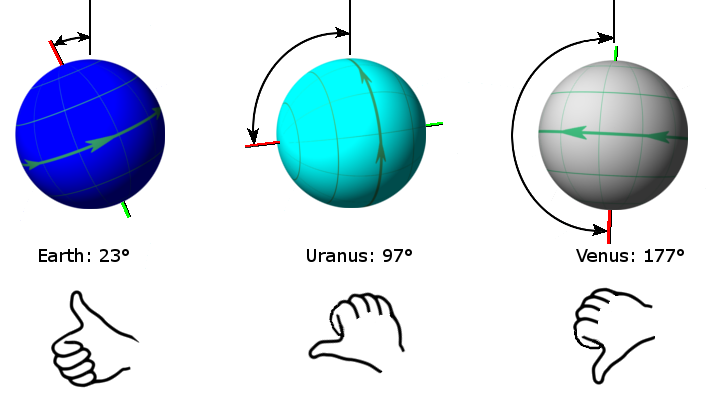 The north pole or positive pole of a planet is defined by the right hand rule, which makes Venus an “upside-down” planet and Uranus a “sideways” planet.

Tilts of the planets’ north poles relative to their orbital planes via Planetary Fact Sheet:

Bottom line: After sunset on October 3, 2016, look for the slender waxing crescent moon to pair up with Venus, the “upside-down” world.