Moon and Jupiter on June 3

They’re the 2 brightest objects in the evening sky – the moon and Jupiter – close together Saturday night! 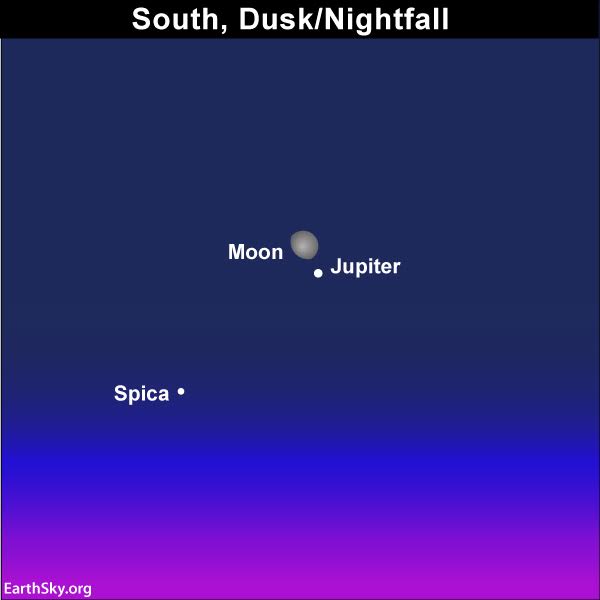 Tonight – June 3, 2017 – the waxing gibbous moon passes 2o north of the planet Jupiter, the brightest starlike object in the evening sky. What a sight! The moon and Jupiter pop out first thing at dusk, and they’ll be fun to spot in the darkening sky. A bright star nearby, Spica in the constellation Virgo, will come into view to the east of the moon and Jupiter as night deepens.

There’s no way to mistake Spica for Jupiter – or vice versa. Jupiter is by far the brighter object. That’s not to say that Jupiter is the more luminous of these two celestial lights. It’s not. Jupiter, being a relatively close planet, shines because it reflects the light of the sun.

Spica is a distant star, or actually two stars in one. Spica, which shines by its own light, is vastly more intrinsically luminous than Jupiter. It’s just much, much farther away. If Spica were at the sun’s distance from Earth, it’d visually be 1,900 times brighter than our sun. Or, another way of putting it, the sun at Spica’s distance of 250 light-years would appear 1/1,900th as bright as Spica. You’d definitely need an optical aid to see our sun this far away.

By Sunday night, June 4, you’ll see the moon has moved closer to Spica on the sky’s dome. 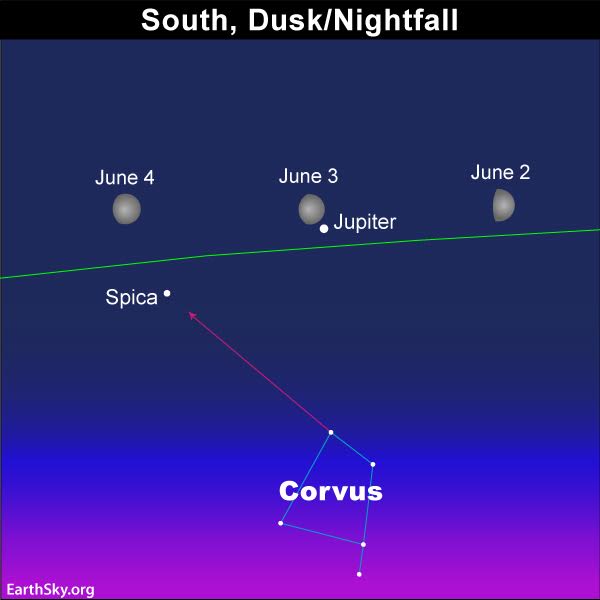 The moon pairs up with Jupiter on June 3 and then with Spica on June 4. If your sky is dark, watch for the constellation Corvus the Crow, which points at Spica.

This motion of the moon in our sky is due to the moon’s actual motion in orbit around Earth. Moving in its orbit, the moon travels in front of all the constellations of the zodiac in about four weeks. As seen from Earth, the moon moves much more quickly relative to the backdrop stars of the zodiac than does any other solar system object. That’s because it’s so close to us.

Bottom line: Watch for the moon and the planet Jupiter to light up the constellation Virgo the Maiden as soon as darkness falls on June 3, 2017.