Aldebaran is star near moon on November 13

Will you see the red star Aldebaran – Eye of the Bull in Taurus – in the moon’s glare tonight? More here, including the story of Aldebaran when it joined with another bright star, Capella, to appear as a double pole star.

On November 13, 2019, the waning gibbous moon passes to the north of Aldebaran, an ex-pole star, a famous zodiac star and the brightest star in the constellation Taurus the Bull.

This is a wonderful time to learn to identify this star, even though you might have to squint a bit to see it in the glare of tonight’s moon. These two luminaries should be up by nightfall or early evening. If you can see the moon, but not Aldebaran, try placing your finger over the moon to seek out the star.

Aldebaran is a bright reddish star, a good star to come to know. Did you know that Aldebaran is also a former pole star? It’s true, and it’s a fascinating story.

Many people know that Polaris is the present-day North Star, but few know that Aldebaran reigned as the North Star some 450,000 years ago.

What’s more, Aldebaran appeared several times brighter in the sky then than it does now. Plus – 450,000 years ago – Aldebaran shone very close to the very bright star Capella on the sky’s dome. In that distant past, these two brilliant stars served as a double pole star in the astronomical year -447,890 (447,891 B.C.). 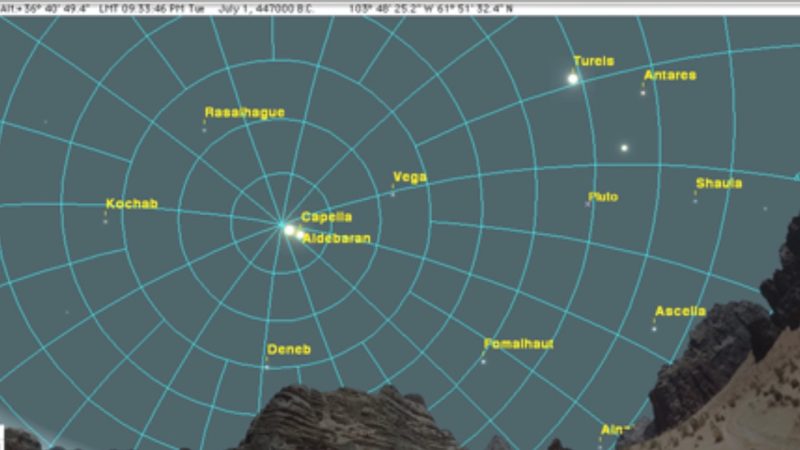 View larger. | This illustration shows the view from what is now Arizona in 447,000 B.C., when Aldebaran and Capella served as double pole stars. Image via Carina Software and Instruments.

But back to Aldebaran and Capella as dual pole stars. The identity of the pole star shifts over time, due to the 26,000-year cycle of precession. To read more about that, click into this article about Thuban, another former pole star.

Still, how can it be, you might wonder, that the stars Aldebaran and Capella were once so near each other on the sky’s dome? They’re not especially close together now. Aren’t the stars essentially fixed relative to one another? The answer is that, yes, on the scale of a human lifespan, the stars are essentially fixed. But the stars are actually moving through space, in orbit around the center of the galaxy. In our solar system, galaxy, and universe … everything is always moving. So the sky looked different hundreds of thousands of years ago than it does today.

So watch for Aldebaran near the moon tonight, and think back to 450,000 years ago, when Aldebaran and Capella teamed up together to serve as Earth’s double north pole star!*

Bottom line: Will you see the red star Aldebaran – Eye of the Bull in Taurus – in the moon’s glare tonight? More here, including the story of Aldebaran when it joined with another bright star, Capella, to appear as a double pole star.