Moon and Aldebaran before dawn July 29 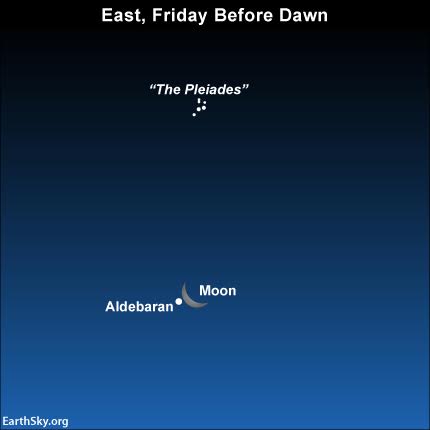 Before dawn tomorrow – July 29, 2016 – look east to see the lunar crescent partnering up with Aldebaran, the brightest star in the constellation Taurus the Bull. Our sky chart at top shows the view as seen from mid-northern North American latitudes, where the moon and Aldebaran will be a hair’s-breadth apart on the sky’s dome.

Elsewhere around the world – Europe, Africa, Asia, Australia and New Zealand – the moon and Aldebaran will be farther apart from one another during the predawn hours on July 29. The moon’s illuminated side will be pointing in the direction of Aldebaran, and in the moon’s direction of travel relative to the backdrop stars of the zodiac.

If you live in Texas, Mexico or Central America, you can actually watch the moon occult – cover over – Aldebaran in the predawn hours on July 29, 2016. Aldebaran disappears behind the moon’s illuminated side and reappears on the moon’s dark side.

For your convenience, we give the local times of the lunar occulation of Aldebaran for various cities.

More information on the lunar occulation of Aldebaran on July 29, 2016 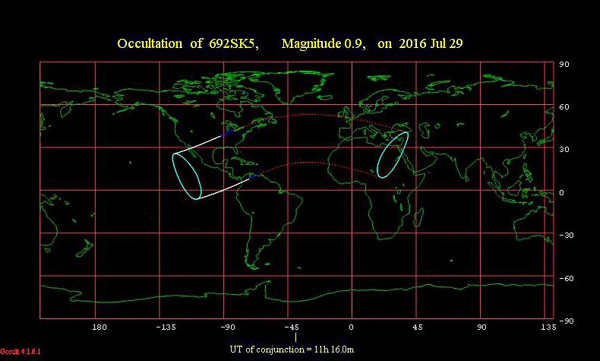 View larger. The portion of the globe between the solid white lines has the lunar occultation of Aldebaran taking place in the predawn hours on July 29, 2016. Click here to find out the occultation times in Universal Time.

Click here to find out the occultation times for numerous localities around the world. Remember that you must translate Universal Time to your local time.

Or look at the chart below for the local times of the occultation on the morning of Friday, July 29, 2016.

Bottom line: For you early birds, enjoy the close pairing of the waning crescent moon and the star Aldebaran in the predawn sky on July 29, 2016. From Texas, Mexico or Central America, the moon will occult, or cover, Aldebaran.