Why can’t I find the Milky Way in May?

From the Northern Hemisphere now, the plane of the Milky Way is as parallel to your horizon as it can be, in early evening. Just wait. Around midnight, the starry band of the Milky Way will begin ascending in your eastern sky.

Image at top: Starlit band of the Milky Way by Larry Landolfi via NASA.

Where do you have to look to see the Milky Way in the month of May? If you’re in the Northern Hemisphere this month, searching for the starlit band of the Milky Way during the evening hours, you won’t find it. That’s because, on May evenings, the plane of the Milky Way lies in nearly the same plane as that of our horizon as viewed from the northern part of Earth’s globe. The starlit trail doesn’t cross the dome of your sky after sunset in May. Instead, it lies nearly flat around your horizon on May evenings.

Want specifics? Here you go. The galactic disk rims the horizon as seen from about 30 degrees north latitude – the latitude of Jacksonville, Florida – Cairo in Egypt – or Chengdu in China.

North of this latitude, the galactic disk tilts a bit upward of the northern horizon during the evening hours in May.

It’s all about our view of the sky – from various parts of Earth – as we orbit the sun. Also, although it’s true that the Milky Way galaxy entirely surrounds us in space, the disk of our Milky Way is flat, like a pancake. The illustration below is an all-sky plot of the 25,000 brightest, whitest stars in the Milky Way. It shows how these stars are concentrated along the flat disk of the Milky Way, as seen in our sky:

This artist’s illustration of the brightest stars in the Milky Way – as seen in our sky – shows our limited, inside view of our own galaxy. The large, dark patch near the middle of the picture is due to nearby dark nebulae, or clouds of gas and dust, which obscure the stars. Image via altasoftheuniverse.com.

Because the Milky Way rims the horizon in every direction at nightfall and early evening, we can’t see this roadway of stars until later at night. Then … whoa! Beautiful. When will you see the Milky Way again?

Like the sun, the stars rise in the east and set in the west, due to Earth’s rotation or spin on its axis. So you can see the Milky Way tonight if you stay up until late night – say, around midnight in early May, or a couple of hours earlier by June.

Or you can see the Milky Way earlier at night still, as the weeks and months pass, and Earth continues on in its orbit around the sun. As we orbit the sun, our evening sky points out toward an ever-shifting panorama of the galaxy. By June, if you’re standing outside in a rural location on a dark night, you might see the starlit trail of the Milky Way ascending in your eastern sky.

By July or August, the Milky Way will be higher up still in the evening. In fact, August is generally considered the best month for Milky Way viewing. From our hemisphere, the galaxy stretches across the sky on August evenings. The center of the galaxy – where the starlit trail of the Milky Way broadens into a wide boulevard of stars – is visible in the south (for us Northern Hemisphere viewers) in August. From the Southern Hemisphere in August, the view is even better. The center of the Milky Way is closer to overhead in August, from the southerly part of Earth’s globe. 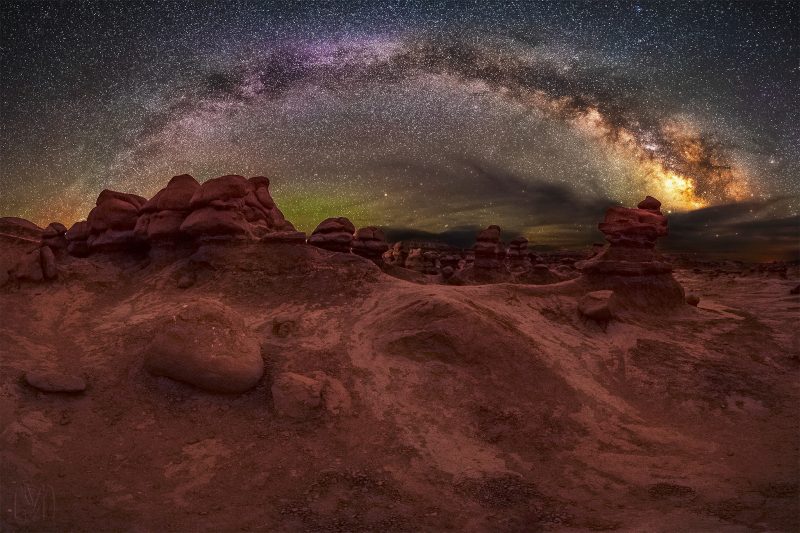 Milky Way over at Goblin Valley State Park, Utah, by Max Moorman Photography. Read more about this photo. Max acquired this photo in the month of June.

Bottom line: Assuming you’re in the Northern Hemisphere, the plane of the Milky Way is as parallel to your horizon as it can be, at nightfall and early evening in the month of May. But if you stay up until around midnight, you’ll begin to see the starlit band of the Milky Way ascending in the eastern sky.