Mercury below Venus in morning sky

Around now, look for Mercury below Venus before sunrise. Both will be in the east, near the sunrise point. Venus is very bright; Mercury is fainter and closer to the sunrise. On April 16, 2019, Mercury and Venus will be closest in the morning sky for all of 2019. They should fit into a single binocular field.

No matter where you live, these next few mornings are a grand time to look for the elusive planet Mercury. For all of us, around the globe, Mercury is now below Venus – the brightest planet – in the sunrise direction, before daytime washes the pair from view. The morning of April 16, 2019, will present the closest pairing of Mercury and Venus in the morning sky for all of 2019. On that morning, these two worlds will be around 4 degrees (width of two fingers at arm’s length) apart on the sky’s dome. They’ll be close enough together to fit (or nearly fit) inside a single binocular field. So if you see Venus, but not Mercury, in the sky before sunrise, try aiming binoculars at Venus to view both planets in a single binocular field.

For the Southern Hemisphere, April 2019 showcases Mercury’s best morning apparition for the year. The planet will be easily visible to the eye alone, below Venus before sunup. For the temperate and polar zones in the Northern Hemisphere, the view of Mercury in the morning sky isn’t as good. The planet is closer to the sunrise. Use binoculars to scan for it along the eastern horizon before sunup. Then remove the binoculars and try to see Mercury with the eye alone. 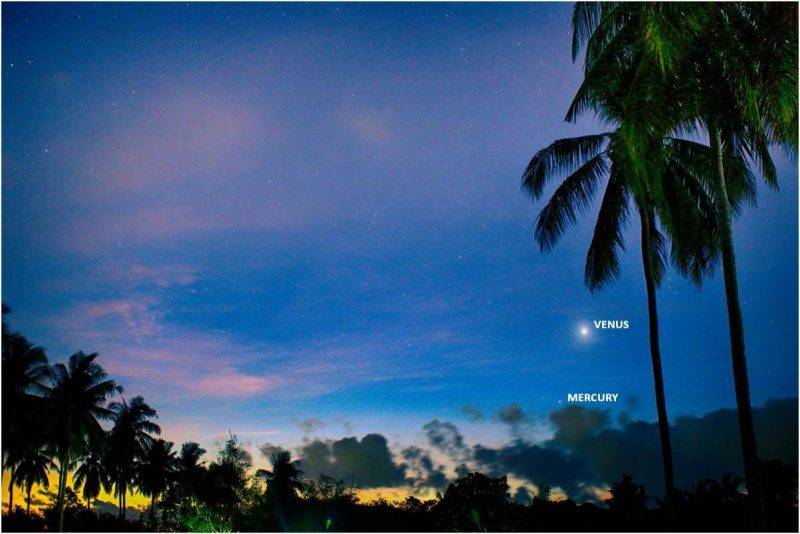 View at EarthSky Community Photos. | Venus and Mercury on Sunday morning via Dr Ski in Valencia, Philippines. Note that Mercury is fainter than Venus. Catching it is all about timing. You’ll want to look before sunrise, but not too shortly before. If your sky is too bright, you might still see Venus, but fainter Mercury will be washed from view by the glow of the coming sunrise.

From anywhere worldwide, it is to your advantage to find an unobstructed horizon in the direction of sunrise for your Mercury search. Look first for Venus – the third-brightest celestial body, after the sun and moon – to blaze mightily in your eastern sky. Then seek for Mercury a short hop below Venus. Keep in mind that Mercury follows Venus into the sky some 15 to 20 minutes after Venus first comes up. So if Venus is sitting very low in your predawn or dawn sky, chances are that Mercury has yet to rise.

Venus’ rising time varies considerably around the world. At far-northern latitudes (such as Alaska), Venus and the sun rise at nearly the same time. From mid-northern latitudes – like the contiguous U.S., Europe and Japan – Venus rises roughly an hour before sunrise. At the Earth’s equator (0 degrees latitude) Venus rises nearly two hours before the sun; and from temperate latitudes in the Southern Hemisphere, Venus rises a whopping 2 1/2 hours before sunrise. Clearly, the southerly latitudes have the big advantage in catching Mercury.

Want to know the precise time that Venus and Mercury rise into your sky? Click here for some recommended almanacs, whose rising/setting times presume a level horizon.

Mercury shines as brilliantly as a 1st-magnitude star, so this world should be visible to the eye alone in the Southern Hemisphere. At temperate latitudes in the Southern Hemisphere (southern Australia, New Zealand), Mercury rises about 50 minutes before dawn’s first light (astronomical twilight). Given clear skies, Mercury should be rather easy pickings from southerly latitudes.

Yet, from mid-northern latitudes, Mercury rises roughly 50 minutes before sunrise, not 50 minutes before astronomical twilight. Because Mercury must contend with the glow of morning twilight at northerly latitudes, you may need binoculars to spot this world. Luckily, Venus is a good 40 times more brilliant than Mercury, so Venus is still visible at dawn. Aim binoculars at Venus and you just might nab Mercury! 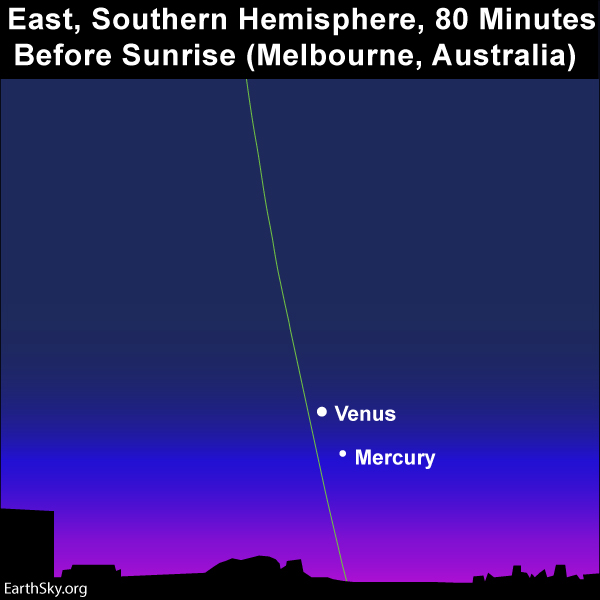 Venus and Mercury rise more than 2 hours before the sun at Melbourne, Australia. From Earth’s Southern Hemisphere now, the view of Mercury is better because it and Venus are more directly above the sunrise point and can be seen in a darker sky.

Bottom line: Around now, look for Mercury below Venus before sunrise. Both will be in the east, near the sunrise point. Venus is very bright; Mercury is fainter and closer to the sunrise. On April 16, 2019, Mercury and Venus will be closest in the morning sky for all of 2019. They should fit into a single binocular field.