Watch for Mars and Spica before dawn

Now the view toward the east before dawn has entirely changed. Bright Jupiter is the 1st object you’ll notice. Venus can only be seen very shortly before sunup. Mars and Spica are fainter, but close! 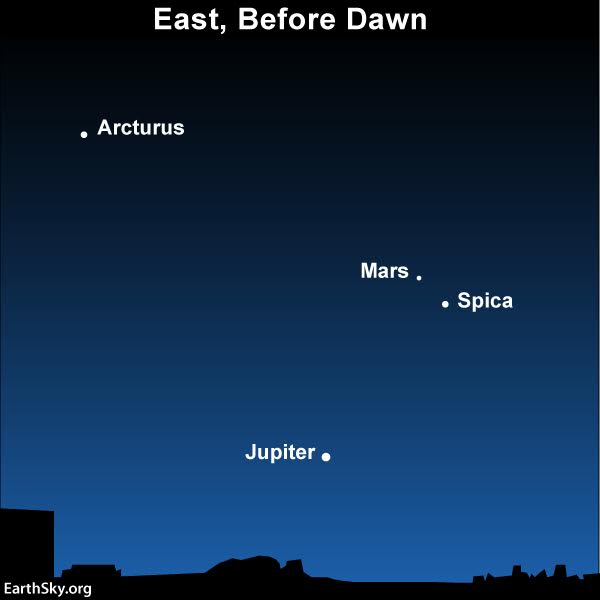 In late November and early December, 2017, get up before morning dawn – say, around one and one-half hours before sunrise – to see the planet Mars pairing up with the bright star Spica, brightest star in the constellation Virgo, on the sky’s dome. Look east, and you can’t miss the dazzling planet Jupiter near the horizon. Mars and Spica are those two colorful starlike objects shining above Jupiter in the eastern, predawn sky.

As darkness gives way to dawn in late November and early December 2017, look also for the brilliant planet Venus near the eastern horizon. Venus, Jupiter and Mars travel in our sky along the ecliptic, which is the plane of Earth’s orbit around the sun. Most planets and moons in our solar system move in this plane. And so – when you see them in the sky – most planets lie along this line across the sky, which is marked in green on our chart above.

By the way, please understand that our chart above is very fanciful. That’s because Mars is so faint that it’ll probably disappear from view by the time Venus rises into your sky. 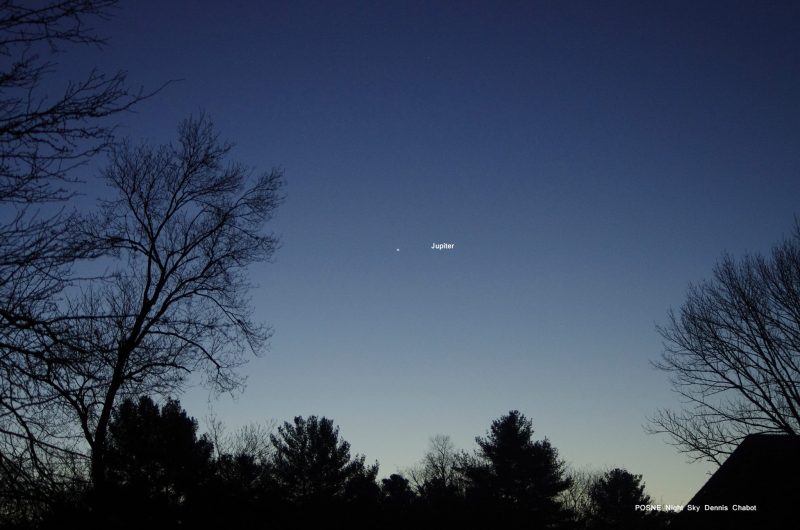 If you see only 1 planet before dawn now, it’ll be Jupiter. Dennis Chabot of Posne Night Sky Astrophotography caught this photo of Jupiter on Saturday morning, November 25, 2017.

Mars and Spica should be close enough together to fit within the same binocular field for another week or so, at least. The actual conjunction date is November 29, 2017, when Mars passes some 3O north of Spica on our sky’s dome. Three degrees in the sky is approximately the width of your thumb at an arm’s length.

Spica, the brighter of these two starlike points of light, radiates blue-white while Mars glowers with a reddish hue. If you have difficulty discerning the contrasting colors of these close-knit celestial gems with the eye alone, try viewing them through binoculars.

However, Mars travels much more quickly through the constellations of the zodiac than Jupiter does. In the morning sky on January 7, 2018, Mars will finally catch up with Jupiter in front of the constellation Libra. It’ll be a stunning conjunction, with Mars passing less than one-quarter degree (0.25o = half the moon’s diameter) south of Jupiter on the sky’s dome.

And it’ll be a great time to note the contrast in the brightness of Jupiter and Mars … so that you can watch Mars brighten to around Jupiter’s brightness as 2018 progresses!

Bottom line: Now the view toward the east before dawn has entirely changed. Bright Jupiter is the 1st object you’ll notice. Venus can only be seen very shortly before sunup. Mars and Spica are fainter, but close!