Mars and Zubenelgenubi close this week

This next week, before dawn, watch as the red planet Mars sweeps by the Zubenelgenubi, the constellation Libra’s alpha star.

Yes, the dazzling conjunction of the brilliant planets Venus and Saturn at dusk/nightfall counts as this month’s marquee event, but let’s not forget about the less showy conjunction of two modestly-bright celestial lights – the red planet Mars and the star Zubenelgenubi – in the morning sky. Get up 1 1/2 hours (or more) before sunrise to view the close-knit morning couple lighting up the predawn darkness all this upcoming week. The conjunction happens on or near December 12, 2019. 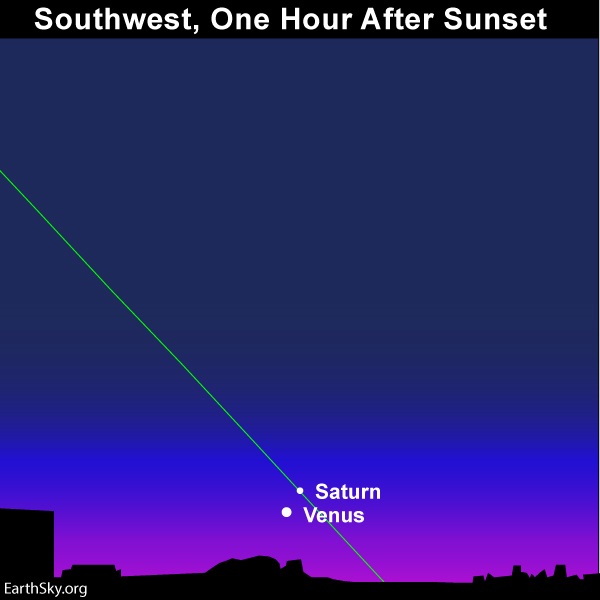 For your convenience, we give you the approximate rising time of Mars for various latitudes (given an absolutely level and unobstructed horizon) for the next several days:

Mars and Zubenelgenubi, the constellation Libra‘s alpha star, shine plenty close together on the sky’s dome all this upcoming week. In fact, the twosome will easily fit inside a single binocular field all the while. You can distinguish ruddy Mars from Zubenelgenubi, because Mars is the brighter of the two – better than twice as bright as Zubenelgenubi. However, both Mars and Zubenelgenubi are rather easy to see with the eye alone in a dark sky. 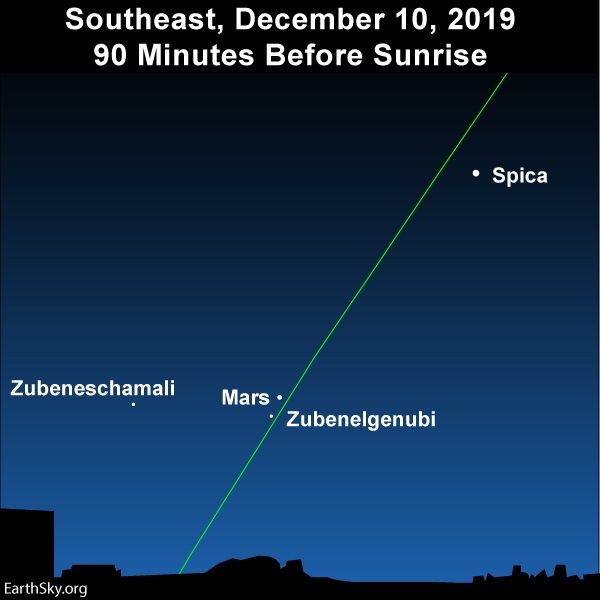 Look for fainter Zubenelgenubi above brighter Mars before dawn December 10, 2019. 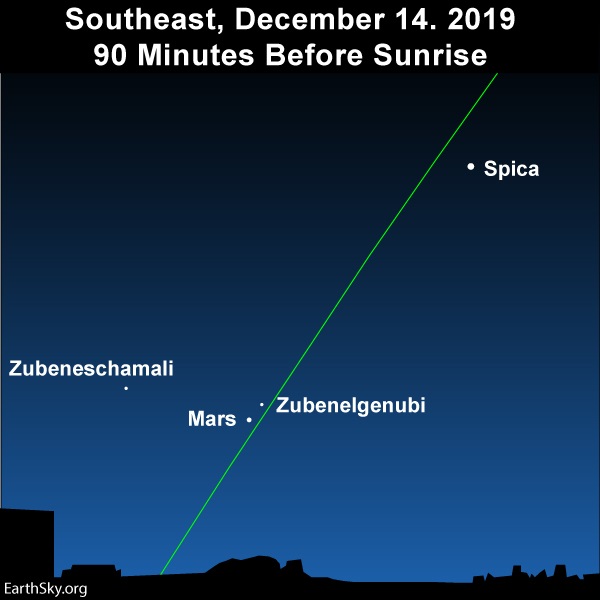 Look for Mars below Zubenelgenubi before dawn December 14, 2019.

Binoculars may come in handy, though. When the twosome first rises into your southeast sky, the extra thickness of Earth’s atmosphere near the horizon may blur or extinguish the view of the morning couple. Or, if you get up too late, the early morning twilight may wash them out. However, if you see Mars but not Zubenelgenubi, aim binoculars at Mars to reel Zubenelgenubi into visibility.

Sky chart of the constellation Libra via IAU (International Astronomical Union). Each year, the sun passes in front of Libra from October 31 to November 23, and the sun has its annual conjunction with Zubenelgenubi on or near November 7. Zubenelgenubi is only about 1/3rd of a degree north of the ecliptic – the Earth’s orbital plane projected onto the constellations of the zodiac.

Want a sky chart showing the present position of Mars upon the zodiac? Visit Heavens-Above for an interactive sky chart.

Bottom line: This next week, before dawn, watch as the red planet Mars sweeps by Zubenelgenubi, the constellation Libra’s alpha star.