Find bright Mars near the moon

Watch for Mars near the moon on June 29 and 30 and on July 1, 2018. And notice Mars’ dramatic brightness now! Mars will get even brighter before its opposition in late July, best since 2003. 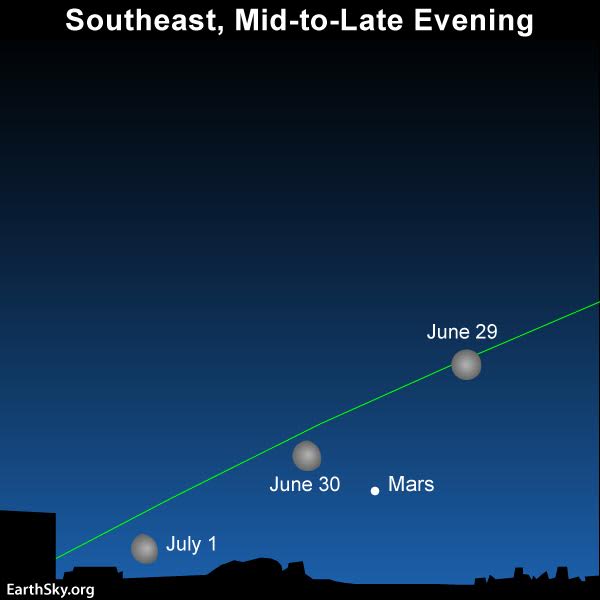 On June 29 and 30, 2018 – and even on July 1 – watch for the bright reddish “star” near the moon. In truth, that’s no star. It’s the red planet, Mars, now very bright and blazing in our sky by mid-evening (midway between your local sunset and midnight) every night. Here’s why Mars will be brighter in 2018 than since 2003. And starting now is the best time to see Mars!

At the beginning of July, Mars shines about 8 times brighter than Saturn, which the moon swept past a few nights ago. By the month’s end, Mars will exceed the brilliance of Saturn by some 15 times.

It’s not often that Mars outshines Jupiter, which is also visible in the evening sky. Jupiter is normally the fourth-brightest celestial object to light up the sky, after the sun, moon and Venus. But, indeed, Mars will outshine Jupiter from about July 7 to September 7, 2018. 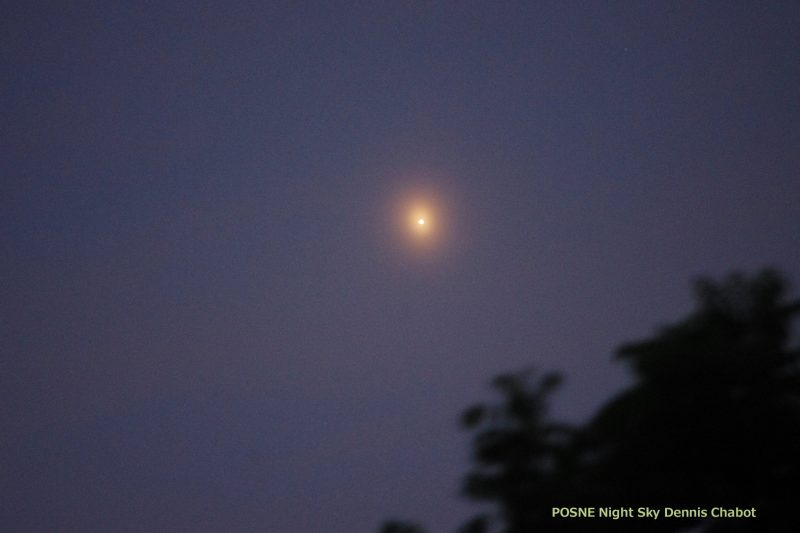 Dennis Chabot of Posne NightSky Astrophotography wrote on June 27, 2018: “Mars this morning. Mars is usually too dim and small to see though hazy cloud cover, but Mars will shine brightly through the summer.”

What’s going on here? Why is Mars so bright now? After all, 2017 was a lousy year for Mars. The planet was faint and inconspicuous in our sky throughout last year.

The answer is that Mars takes about two Earth-years to orbit the sun, while Earth takes one year. So, about every two years, we catch up to Mars in the race of the planets. Here’s where Earth and Mars are on June 29, 2018. As you can see, we’re about to catch up to Mars: 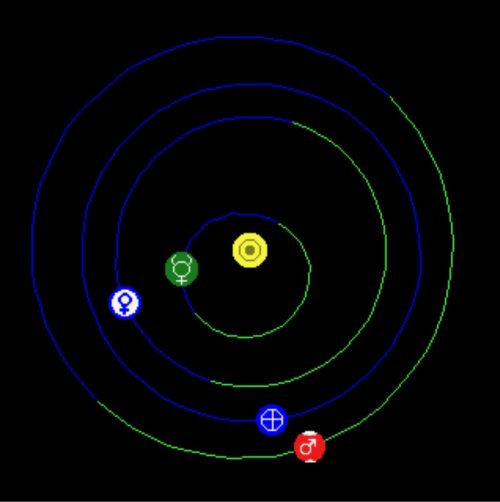 Here’s the Fourmilab depiction for June 29, 2018. Mars is red, Earth is blue. In the chart, you can see that Earth and Mars are now very close. Earth is about to catch up to Mars in the race of the planets around the sun. Thus Mars is bright now!

So we pass between Mars and the sun about every two years. Astronomers call this an opposition of Mars. But not all Martian oppositions are created equal. The best oppositions comes when Mars is near its perihelion – or closest point to the sun – around the time we are sweeping between the sun and Mars. In 2018, Mars will reach perihelion on September 16. We go between the sun and Mars on July 27. With Mars so near the sun at opposition, it’ll also be especially close to us, closer than since 2003.

Do you remember Mars’ historically close opposition of August 28, 2003? That year, it was closer and brighter than it had been in some 60,000 years. Mars’ upcoming July opposition – on July 27 – will be the best since then.

Click here for more about close and far Mars oppositions

Diagram by Roy L. Bishop. Copyright Royal Astronomical Society of Canada. Used with permission. Visit the RASC estore to purchase the Observer’s Handbook, a necessary tool for all skywatchers. Read more about this image.

Bottom line: Watch for Mars near the moon on June 29 and 30 and on July 1, 2018. And notice Mars’ dramatic brightness now! Mars will be even brighter before its opposition in late July.