Watch for the waning moon and Jupiter

No matter where you live worldwide, let the waning moon be your guide to the bright planet Jupiter over the next several mornings. Plus Venus and Saturn are nearby!

On the morning of February 26, 2019, the moon will be at or near its last quarter phase – visible in the dawn sky – with its half-illuminated side pointing at bright Jupiter. One day later – on February 27 – look for the wide waning crescent to more closely pair up with Jupiter on the sky’s dome. If you’re up before dawn, you might also see Antares, the brightest star in the constellation Scorpius the Scorpion, near the moon and Jupiter on these mornings.

Whether you see the moon and Jupiter in your southern or northern sky before sunup will depend on your location on the globe. We in the Northern Hemisphere see them in the south. As you face south, east is to your left and west to your right. From the Southern Hemisphere, they’re more toward the northern sky. But, for all of us, the moon and Jupiter are up before the sun. They’re very bright. You can’t miss them if you look!

The lit side of a waning moon always points eastward – the direction of the moon’s motion in orbit and monthly trip in front of the constellations of the zodiac. Because east is in the direction of sunrise, watch for the moon to swing past Jupiter in another few days, and then the planets Saturn and Venus in early March 2019. 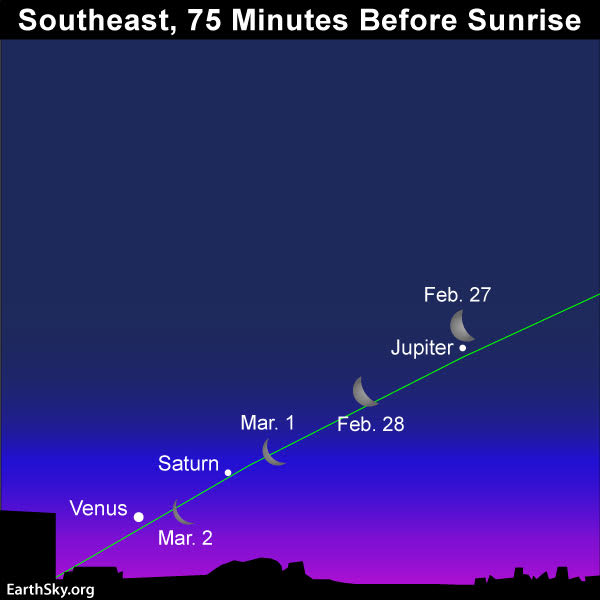 For the fun of it – and to help you get a sense of how the sky changes from Earth’s Northern and Southern Hemispheres – check out the two charts below. The first one shows the view from about the middle of the continental U.S. on the mornings of February 26 and 27. The second chart shows the same view – on the same mornings – from Buenos Aires, Argentina, in South America. 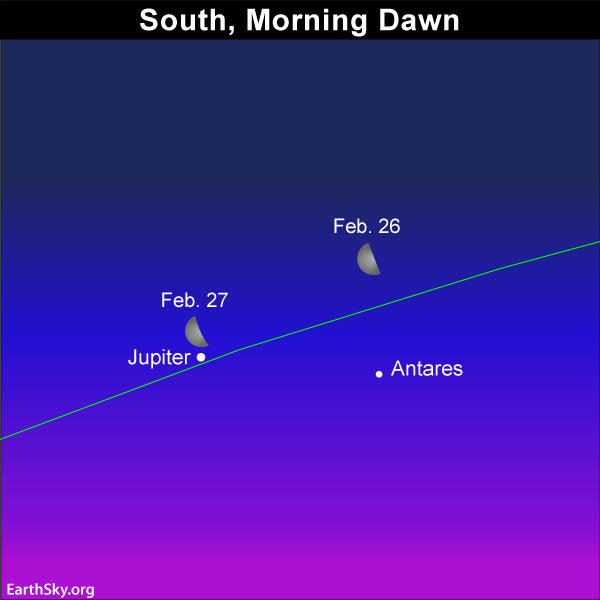 The moon, the planet Jupiter and the star Antares as seen from middle latitudes in North America. 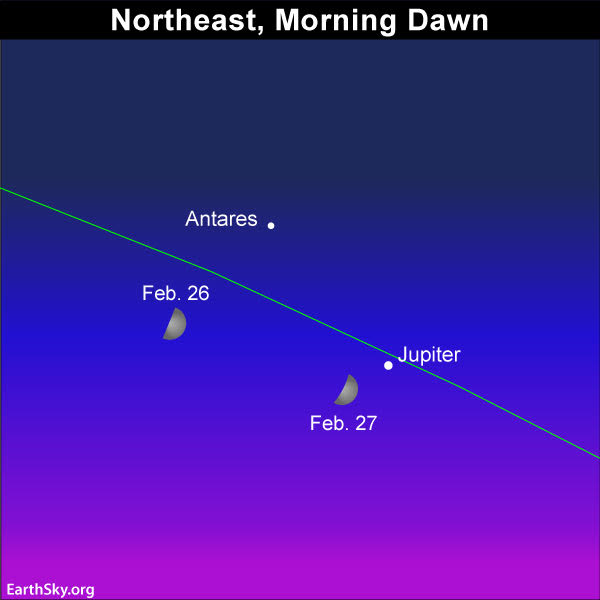 The moon, the planet Jupiter and the star Antares as seen from Buenos Aires, Argentina.

Bottom line: No matter where you live worldwide, let the waning moon be your guide to the dazzling planet Jupiter over the next several days.