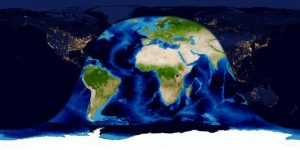 Day and night sides of Earth at the instant of the January 2017 full moon (2017 January 12 at 11:34 UTC). The shadow line passing in between Central America and South America depicts sunrise whereas the shadow line running through Asia represents sunset.

Thank you! Your submission has been received!
Oops! Something went wrong while submitting the form.
END_OF_DOCUMENT_TOKEN_TO_BE_REPLACED