The legacy of the Harvest and Hunter’s Moons are the grand procession of moonlit nights in the season of waning daylight. In 2019, watch for the full, or nearly full moon, around October 11, 12, 13 and maybe even 14.

What is a Hunter’s Moon? Is it just a name? In fact, the Hunter’s Moon – like the Harvest Moon – has special characteristics. If you watch where the moon rises along your eastern horizon for the next several days, from either the Northern or Southern Hemisphere, you’ll see the moon rising farther north (left) on the horizon each day.

At northerly latitudes, that means a minimal lag time between successive moonnrises. The moon usually rises about 50 minutes later each day. Around the time of the Harvest and Hunter’s full moons, it rises at or near sunset for several nights in a row, with no long period of darkness between sunset and moonrise. There’s a grand procession of moonlit nights in this season of waning daylight, here in the Northern Hemisphere. Many notice it – have always noticed it – and that’s why the Harvest and Hunter’s Moons are so well known. 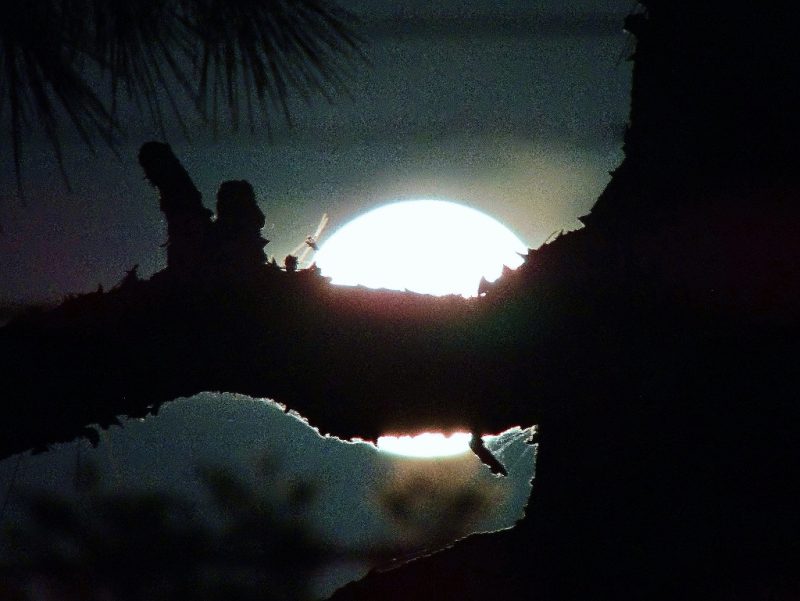 2018’s Hunter’s Moon came closer to Halloween, on October 24. Greg Bishop wrote: “As the Hunter’s Moon first came into view, I walked down my street looking for interesting views. I saw many pumpkins out in expectation of Halloween, so upon seeing this eerie glow and spider webs in an old pine tree, I knew I’d found the perfect shot!” Thanks, Greg! See more photos of 2018’s Hunter’s Moon.

Astronomers define a full moon as happening at a well-defined instant, when the moon is 180 degrees opposite the sun in ecliptic longitude. That moment happens on Sunday, October 13, 2019, at 21:08 Universal Time (UTC).

Want to know when the moon turns full in your time zone? Visit Sunrise Sunset Calendars and check the moon phases box.

Want more specifics on moonrise times? Any full moon rises at or near sunset, and then rises – on the average – 50 minutes later the following day. But, at 40 degrees north latitude, the moon now rises some 25 to 30 minutes later (instead of the average 50 minutes later), and will continue to do so for the next several days. At higher latitudes, the Hunter’s Moon effect is even more pronounced. At Fairbanks, Alaska (65 degrees north latitude), the moon rises at nearly the same time for days on end, centered around this weekend’s full moon.

What else should you watch for? If you’re outside watching for the moonrise, also notice Earth’s shadow ascending in the east. 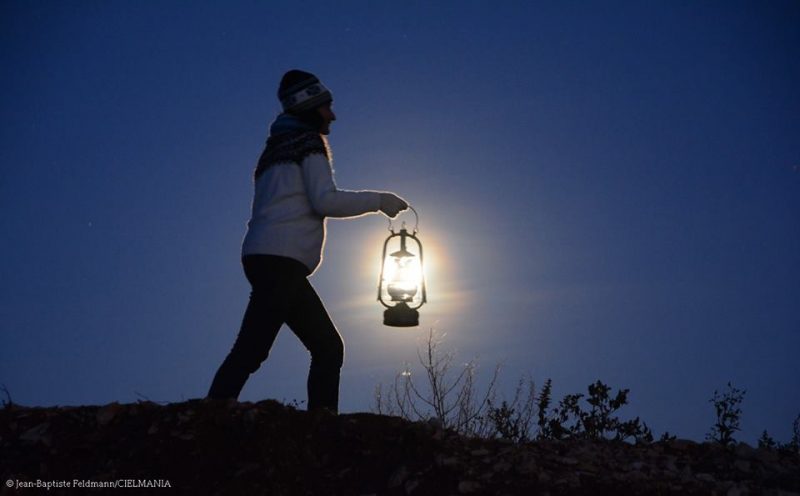 Our friend Jean-Baptiste Feldmann of Cielmania captured the light of the Hunter’s Moon in a storm lamp in October, 2018. See more photos of 2018’s Hunter’s Moon.

Before the advent of artificial lighting, our ancestors relied on moonlight for nocturnal activities. That’s why they so valued the full moon, which rises in the east around sunset, climbs highest in the sky around midnight, and sets in the west around sunrise. Our ancestors at mid-northern and far-northern latitudes surely noted the peculiar rising times of September and October full moons, when the moon rises near sunset for several evenings in a row. In September, the story goes, they used those moonlit evenings to continue working in the fields, bringing in the crops. Hence the name Harvest Moon. In October (or November), they used the light of the full moon – rising so soon around the time of sunset – to hunt for game that might be scooting along over the harvested fields. Hence the name Hunter’s Moon.

Bottom line: The grand procession of moonlit nights in the season of waning daylight remains the legacy of the Harvest and Hunter’s Moons. In 2019, watch for the full, or nearly full moon, around October 11, 12, 13 and maybe even 14. Have fun!

Visit timeanddated.com for the azimuth reading of moonrise.