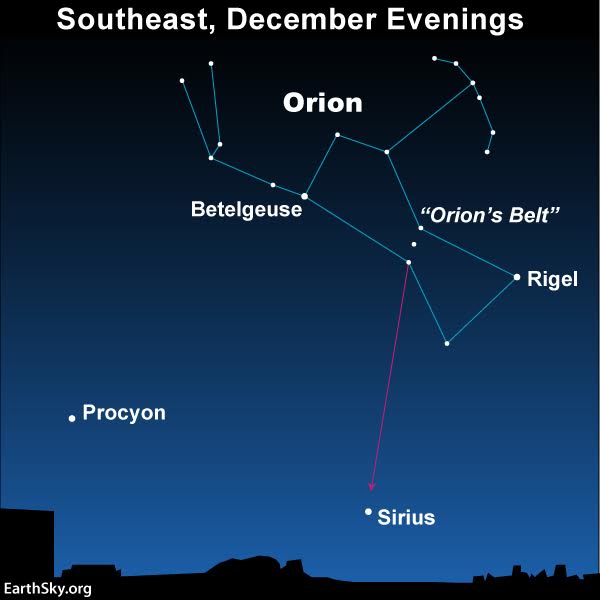 Tonight – or any night for several months to come – look for the two Dog Stars. They’ll both be up by around mid-evening, or roughly 9 to 10 p.m. You should be able to see these brilliant stars in spite of the glare from a waning gibbous moon.

The brighter of the two Dog Stars is Sirius, which makes up the neck of the constellation Canis Major, the Greater Dog. Sirius is easy to spot, because it also happens to be the brightest of all the stars we see in our night sky.

The other Dog Star is Procyon in the constellation Canis Minor the Lesser Dog. Procyon means “before the Dog” because this star’s rising signals that Sirius, the Dog star, is soon to follow Procyon into the sky. 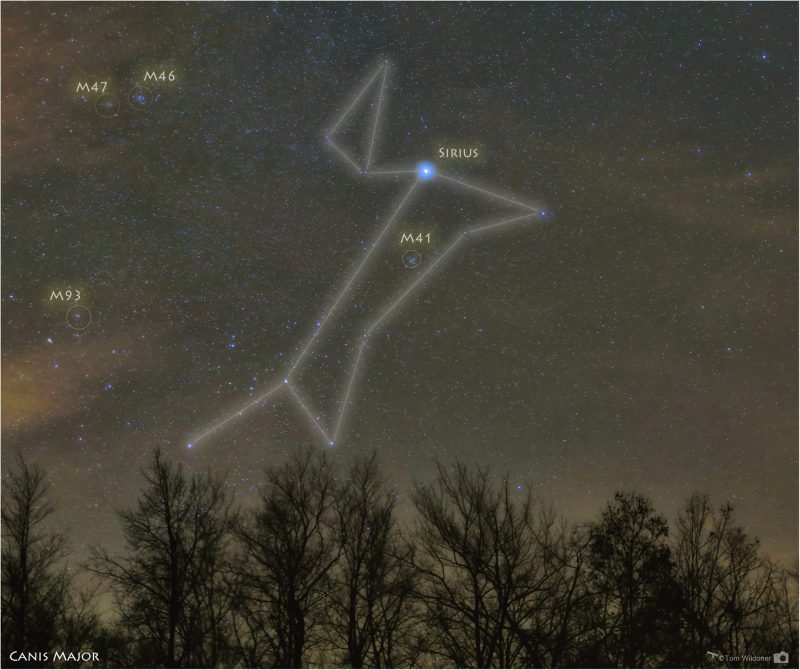 The Greater Dog looking super cute in this photo by Tom Wildoner! Brightest star is Sirius.

The Dog Stars – especially Sirius – have a special place in the modern myths about the night sky. A book called The Sirius Mystery by Robert K. G. Temple – first published by St. Martin’s Press in 1976 – presents a hypothesis that the Dogon people of Mali, in west Africa, preserve a tradition of contact with intelligent extraterrestrial beings from the Sirius star system.

Wikipedia lists reviews of these claims, by the late astronomer Carl Sagan and others 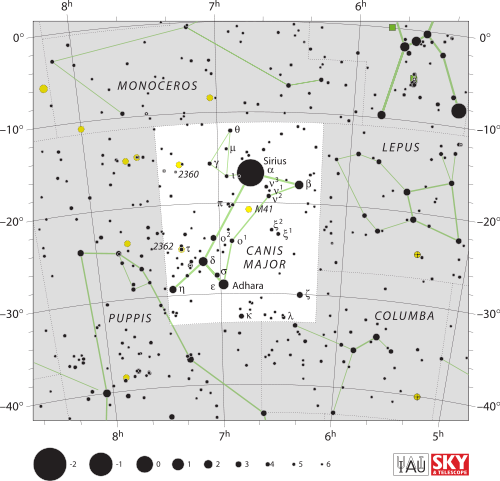 View larger. | Sky chart of the constellation Canis Major the Greater Dog. Orion’s Belt, the compact line of three stars at the upper right, points to the star Sirius, the Dog Star.

Also bright in the sky, although less so than Sirius, is the star Adhara, which makes up the Larger Dog’s bottom right foot. Although it’s true that Sirius has the brightest apparent magnitude of all the visible stars, Adhara actually has a brighter absolute magnitude than Sirius. In other words, Sirius looks bright to us because it’s closer. But if the two stars were observed at an equal distance from Earth, Adhara would appear brighter than Sirius.

Bottom line: If you’re in the Northern Hemisphere, and you look towards the southeast tonight in late evening, you’ll find Sirius, brightest star in the sky. It’s the brighter of the two Dog Stars. The other Dog Star is nearby Procyon.