Will you catch the moon and Saturn before sunrise February 2?

Jupiter and Venus will be very bright and up in the east before dawn. Saturn is below them – much fainter – near the moon on the morning of February 2.

Have you seen Saturn yet? It’s just now returning to the east before sunup. Before dawn on February 2, 2019, see if you can catch the slender waning crescent moon near Saturn. Watch for the twosome to appear low in the southeast as darkness gives way to dawn (90 to 75 minutes before sunrise).

Can’t spot ’em? Try using the brilliant planets Venus and Jupiter as guides. A line between these two bright worlds will point to the moon and Saturn near the sunrise point on the horizon. That’ll be true no matter where you are on the globe.

For the most favorable view of the moon and Saturn, from anywhere worldwide, find an unobstructed horizon in the direction of sunrise. From northerly latitudes in particular, the moon and Saturn will be nestling low in the morning twilight. Bring along binoculars if you have them, especially if your viewing conditions are less than ideal.

Or try this link for their rising times for U.S. and Canada locations, plus other spots worldwide.

Although Saturn is as bright as a 1st-magnitude star, this planet’s luster will appear tarnished by the early morning twilight, especially as seen from far northerly latitudes (for example, Canada or Alaska). If you can spot the thin moon, but not Saturn, binoculars might help you glimpse nearby Saturn in the glow of dawn.

The featured sky chart at the top of this post is especially made for mid-northern North American latitudes. However, from virtually everyplace worldwide, the moon and Saturn snuggle up quite close together on the sky’s dome before sunrise February 2. As viewed from North America, the moon sits below Saturn on February 2 before sunrise. However – on February 2 in Asia, Australia and New Zealand – the moon hovers above Saturn in the morning sky.

And, from a very small swath in Europe and Africa, you may see the moon but not Saturn before sunup on January 2. Where will Saturn be? It’ll be behind the moon, temporarily. This event is called an occultation of Saturn. 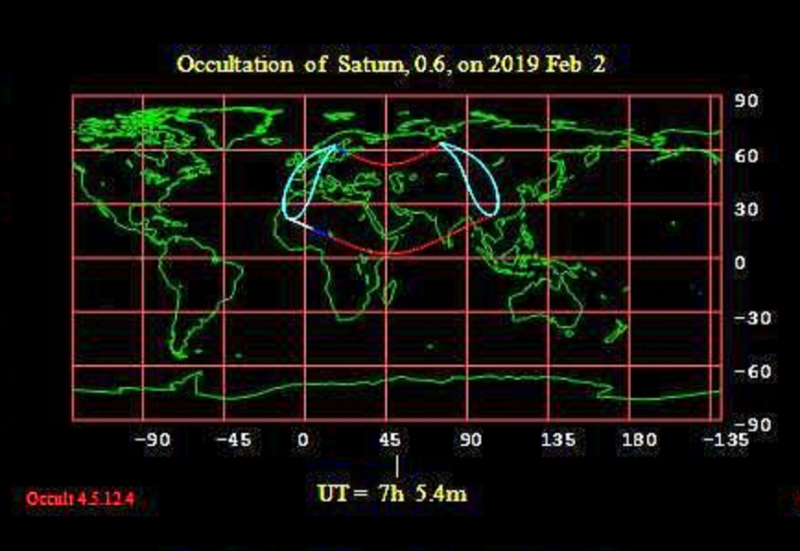 The occultation of Saturn on February 2, 2019, takes place in a predawn/dawn sky from a very small section of the world. The area between the red lines has the occultation taking place in the daytime. The blue depicts morning twilight and white represents a predawn sky. Map via IOTA.

For instance, as seen from Berlin, Germany, on February 2, 2019, the moon will occult Saturn from 6:51 a.m. to 7:38 a.m. Central European Time. On the map below, via Curt Renz, the occultation takes place in a dark sky to the north or above the dark red line at the bottom left (running through western Africa), and to the south or below the dark blue line at the upper left (running just north of Stockholm, Sweden). 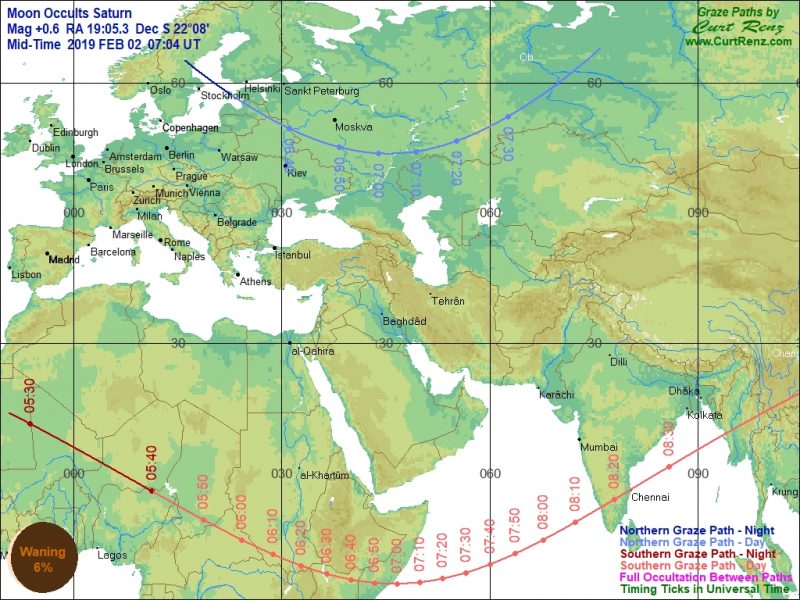 Map of the February 2, 2019 occultation of Saturn by the moon. The moon will pass in front of Saturn, as seen before sunrise, only in limited parts of Europe and northwest Africa. Image via Curt Renz. 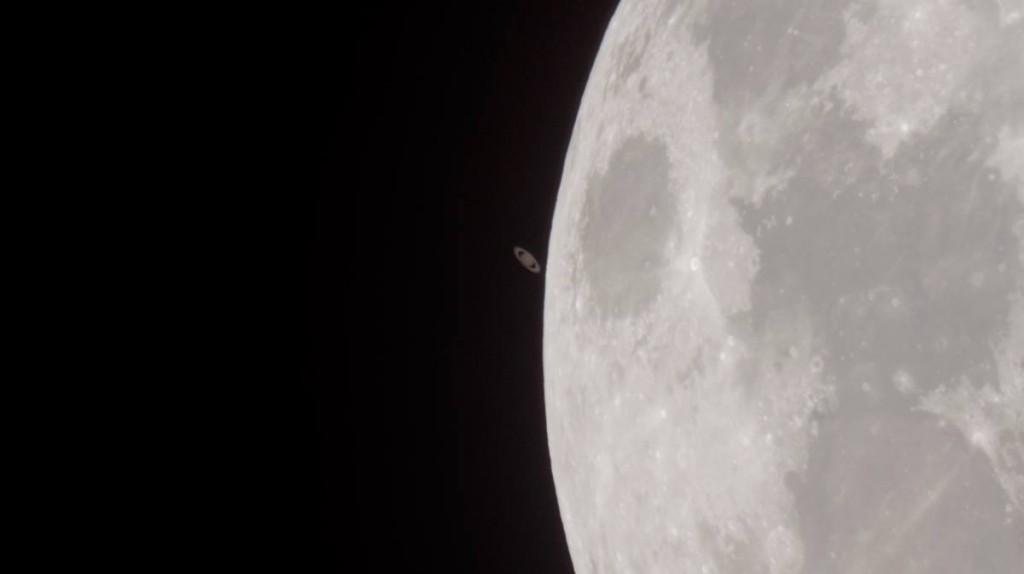 This is what an occultation of Saturn has to offer. It’s Saturn and the moon (r) shortly after an occultation – May 14, 2014 – as seen from Western Australia. Photo by Colin Legg Photography.

In 2019, the moon will occult Saturn every month from now through November. But you have to reside at just the right place on Earth to witness any one of these occultations.

This time around – on February 2, 2019 – it’ll be a slender waning crescent moon that occults Saturn, with Saturn disappearing behind the moon’s illuminated side and then reappearing on the moon’s dark side. The moon’s phase will increase with each monthly occultation of Saturn, until the full moon occults Saturn on July 16, 2019. Click here for more information.

Bottom line: Before sunrise on February 2, 2019, try your luck catching the moon and Saturn beneath the two dazzling morning planets, Venus and Jupiter!