The waxing gibbous moon has moved eastward in its orbit around Earth, but it’s still close to Spica, Virgo’s brightest star. 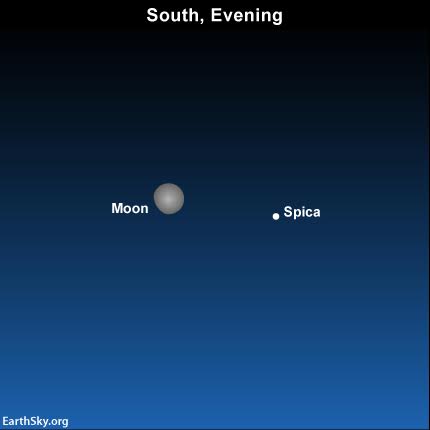 Tonight – May 18, 2016 – the bright waxing gibbous moon again shines close to the star Spica. This star is the brightest one in the large, dim constellation Virgo, and also a key star of the Zodiac, the narrow band of stars in front of which the sun, moon and planets forever travel.

Because Spica is within the Zodiac – and because the moon travels on the Zodiac – you’ll see the moon pair up with Spica once (or sometimes twice) a month. If you watch, you can see that happen in the months ahead.

This year, in 2016, the sun will pass in front of the constellation Virgo from September 16 to October 30, and have its yearly conjunction with the star Spica around mid-October. At that juncture, Spica will transition out of the evening sky and into the morning sky. But Spica probably won’t be far enough from the glare of sunrise to become visible in the morning sky until early November 2016. 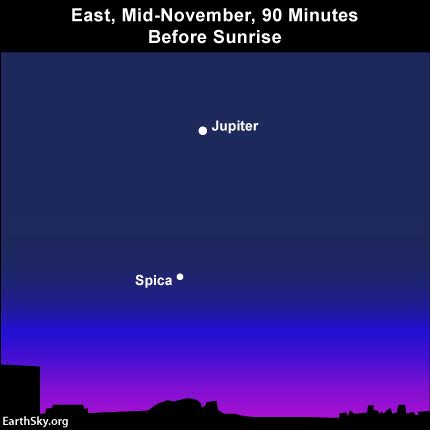 When Jupiter and Spica swing over to the morning sky later this year, in 2016, look for Jupiter in the vicinity of Spica, Virgo’s brightest star.

Remember, you can always find Spica by using the Big Dipper as a guide, as shown on the chart below. 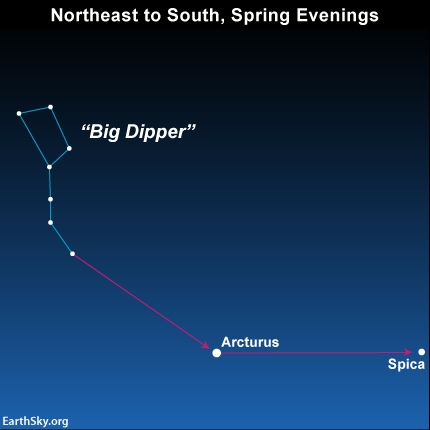 Use the Big Dipper to locate the stars Arcturus and Spica for months to come.

Bottom line: Let the bright waxing gibbous moon show you the star Spica – brightest light in the constellation Virgo – on the evening of May 18, 2016.