Arc to Arcturus and spike Spica

Right now, the planets Venus and Jupiter – and the Big Dipper – can help you learn the sky mnemonic follow the arc to Arcturus and drive a spike to Spica. 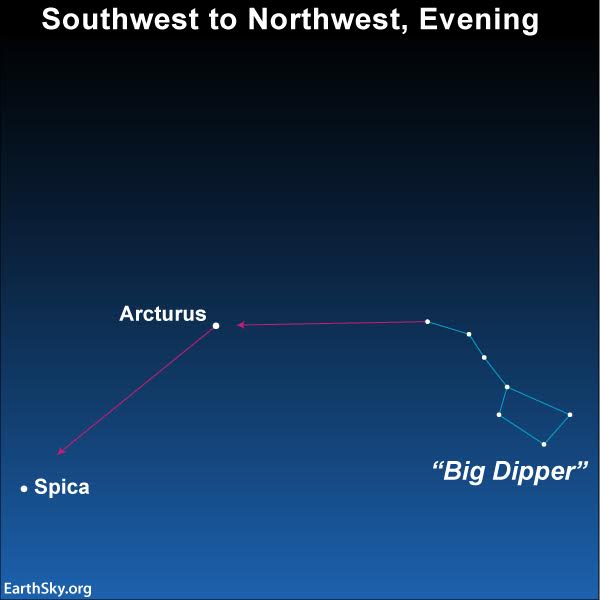 Tonight, or any night in the coming month or two, you can rely on the Big Dipper to star-hop to the bright stars Arcturus and Spica. Just remember this mnemonic: follow the arc to Arcturus, and drive a spike to Spica.

As late summer and autumn come to the Northern Hemisphere, the Big Dipper is found fairly high up in the northwest sky at nightfall. From middle-to-far northern latitudes, the Dipper is easy to spot in the August evening sky. It’s tougher from the Northern Hemisphere tropics, where the Big Dipper sits lower in the sky as darkness falls and swings beneath the horizon relatively early in the evening.

Meanwhile, the Big Dipper isn’t visible from far southerly latitudes in the Southern Hemisphere at nightfall, because it’s below the horizon from that part of the world.

Luckily, in August 2018, you don’t need the Big Dipper to find Spica at nightfall and early evening. Just look westward as darkness falls and you can’t miss the dazzling planet Venus – the brightest starlike object in the evening sky. Then note the king planet Jupiter. From northerly latitudes, Jupiter is in the southwest at nightfall. From the Southern Hemisphere, it’s closer to overhead as darkness falls. 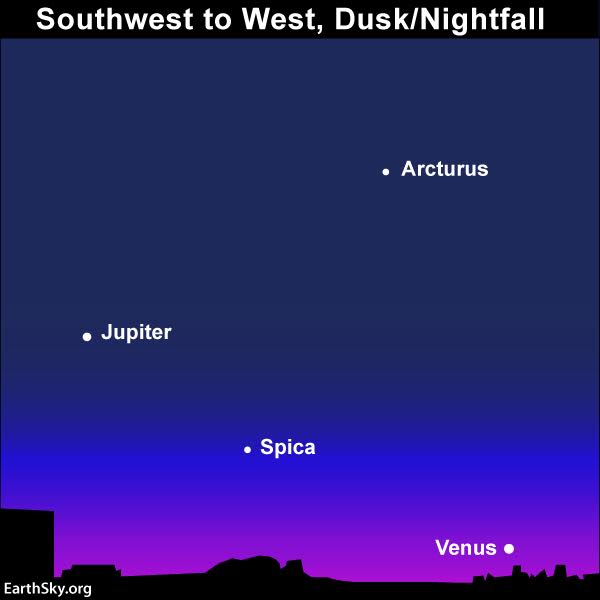 Identify the star Spica between the brilliant planets Venus and Jupiter. Arcturus is also nearby. Then use your identification to confirm the handy skywatching phrase “follow the arc to Arcturus and drive a spike to Spica.” After that, for years to come – long after Venus and Jupiter are gone – you can always find these stars.

All month long, look for Spica in between Venus and Jupiter. Although Spica ranks as 1st-magnitude star, it’s nowhere as brilliant as Venus or Jupiter. Day by day, watch for Venus to move closer and closer to Spica on the sky’s dome. By September 1, 2018, Venus and Spica will actually be in conjunction.

Arcturus should be fairly easy to view from the Southern Hemisphere as well. Look for this brilliant yellow-orange star in your northwest sky at nightfall and early evening.

Click here to find out when the sun, Venus, Spica and Arcturus set in your sky.

Bottom line: Identify the star Spica between the brilliant planets Venus and Jupiter. Then use this identification to confirm the handy skywatching mnemonic “follow the arc to Arcturus and drive a spike to Spica.”