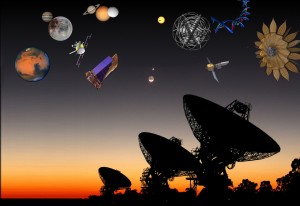 The search for life beyond Earth spans three domains: 1) a search of local small bodies of the Solar System, 2) a new search of exoplanets for spectral signatures of ecosystems, and 3) the search for signals from extraterrestrial intelligence. Illustration Credit: NASA

Thank you! Your submission has been received!
Oops! Something went wrong while submitting the form.
END_OF_DOCUMENT_TOKEN_TO_BE_REPLACED