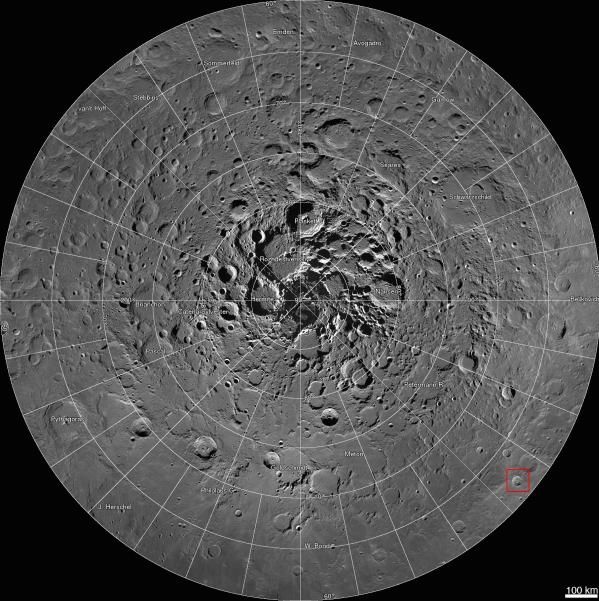 Go to interactive map here. | A new 680-gigapixel interactive mosaic from NASA’s Lunar Reconnaissance Orbiter covers the north pole of the moon from 60 to 90 degrees north latitude. Notice the small red box at lower right, then look at the sidebar below to see how you can zoom in on an area of the moon. Image via NASA/GSFC/Arizona State University

Using cameras aboard NASA’s Lunar Reconnaissance Orbiter (LRO) – which has been orbiting the moon since 2009, with an ultimate goal of a safe human return there – scientists have created the largest high resolution mosaic of our moon’s north polar region, ever. The images are constructed from 10,581 pictures, and they cover six-and-a-half feet (two-meters) per pixel. If you go here to the interactive map, you can zoom in and out and pan around an area.

“This unique image is a tremendous resource for scientists and the public alike,” said John Keller, LRO project scientist at NASA’s Goddard Space Flight Center, Greenbelt, Md. “It’s the latest example of the exciting insights and data products LRO has been providing for nearly five years.”

The images making up the mosaic were taken by the two LRO Narrow Angle Cameras, which are part of the instrument suite known as the Lunar Reconnaissance Orbiter Camera (LROC). The cameras can record a tremendous dynamic range of lit and shadowed areas.

“Creation of this giant mosaic took four years and a huge team effort across the LRO project,” said Mark Robinson, principal investigator for the LROC at Arizona State University in Tempe. “We now have a nearly uniform map to unravel key science questions and find the best landing spots for future exploration.”

The entire image measures 931,070 pixels square – nearly 867 billion pixels total. A complete printout at 300 dots per inch – considered crisp resolution for printed publications – would require a square sheet of paper wider than a professional U.S. football field and almost as long. If the complete mosaic were processed as a single file, it would require approximately 3.3 terabytes of storage space. Instead, the processed mosaic was divided into millions of small, compressed files, making it manageable for users to view and navigate around the image using a web browser. 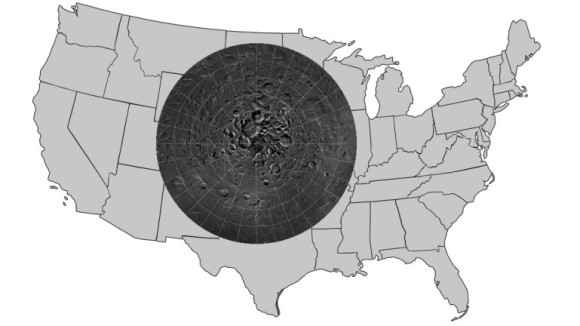 The area on the moon covered by the new interactive map is equal to more than one-quarter of the United States. Image via Gizmag.

Bottom line: Click around on a new high resolution interactive mosaic of the moon’s north pole, created using cameras aboard NASA’s Lunar Reconnaissance Orbiter. The images cover an area equal to more than one-quarter of the United States.

Go here, to click on the interactive version of the new lunar north pole map.