Your brain is wired to quiet voices in your head

Nerve circuits let the brain turn down sounds that come from our own actions, and turn up other sounds we need to pay attention to, say researchers. 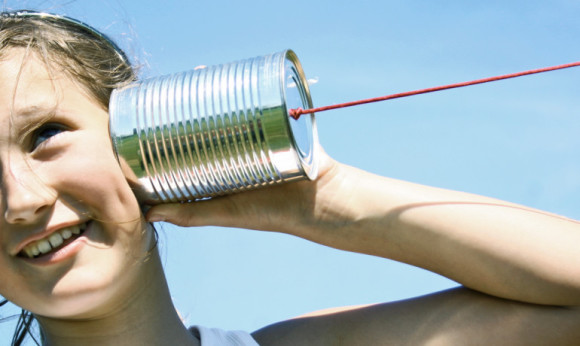 During a normal conversation, your brain is constantly adjusting the volume to soften the sound of your own voice and boost the voices of others in the room.

This ability to distinguish between the sounds generated from your own movements and those coming from the outside world is important not only for catching up on water cooler gossip, but also for learning how to speak or play a musical instrument.

Now, researchers have developed the first diagram of the brain circuitry that enables this complex interplay between the motor system and the auditory system to occur. 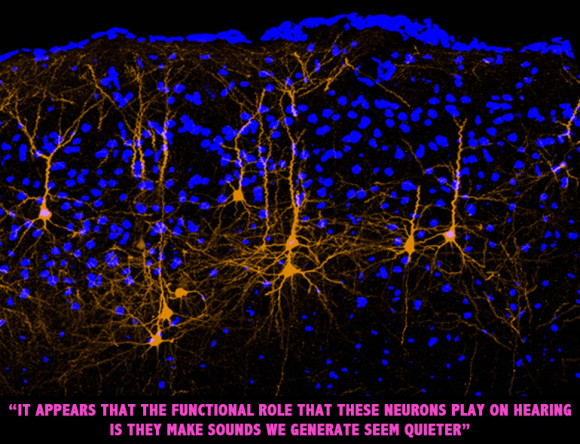 A mouse brain’s motor cortex shows a subset of neurons, labeled in orange, that have long axons extending to the auditory cortex. These neurons convey movement-related signals that can alter hearing. Blue dots in the background show brain cells that do not send axons to the auditory cortex. (Image credit: Richard Mooney Lab/Duke)

The research, published in The Journal of Neuroscience, could lend insight into schizophrenia and mood disorders that arise when this circuitry goes awry and individuals hear voices other people do not hear.

“Our finding is important because it provides the blueprint for understanding how the brain communicates with itself, and how that communication can break down to cause disease,” says Richard Mooney, senior author of the study and professor of neurobiology at Duke University School of Medicine.

“Normally, motor regions would warn auditory regions that they are making a command to speak, so be prepared for a sound. But in psychosis, you can no longer distinguish between the activity in your motor system and somebody else’s, and you think the sounds coming from within your own brain are external.”

Researchers have long surmised that the neuronal circuitry conveying movement—to voice an opinion or hit a piano key—also feeds into the wiring that senses sound.

But the nature of the nerve cells that provided that input, and how they functionally interacted to help the brain anticipate the impending sound, was not known.

In this study, Mooney used a technology created by Fan Wang, associate professor of cell biology, to trace all of the inputs into the auditory cortex—the sound interpreting region of the brain. Though the researchers found that a number of different areas of the brain fed into the auditory cortex, they were most interested in one region called the secondary motor cortex, or M2, because it is responsible for sending motor signals directly into the brain stem and the spinal cord.

“It jibed nicely with our expectations,” says Anders Nelson, co-lead author of the study and a graduate student in Mooney’s lab. “It is the brain’s way of muting or suppressing the sounds that come from our own actions.”

Finally, the researchers tested this circuitry in live animals, artificially turning on the motor neurons in anesthetized mice and then looking to see how the auditory cortex responded.

“It appears that the functional role that these neurons play on hearing is they make sounds we generate seem quieter,” says Mooney. “The question we now want to know is if this is the mechanism that is being used when an animal is actually moving. That is the missing link, and the subject of our ongoing experiments.”

Once the researchers have pinned down the basics of the circuitry, they could begin to investigate whether altering this circuitry could induce auditory hallucinations or perhaps even take them away in models of schizophrenia.

The National Institutes of Health supported the study.