X-rays from a reborn planetary nebula

Images of the planetary nebula Abell 30, (a.k.a. A30), show one of the clearest views ever obtained of a special phase of evolution for these objects.

A planetary nebula – so called because it looks like a planet when viewed with a small telescope – is formed in the late stage of the evolution of a sun-like star.

After having steadily produced energy for several billion years through the nuclear fusion of hydrogen into helium in its central region, or core, the star undergoes a series of energy crises related to the depletion of hydrogen and subsequent contraction of the core. These crises culminate in the star expanding a hundred-fold to become a red giant. 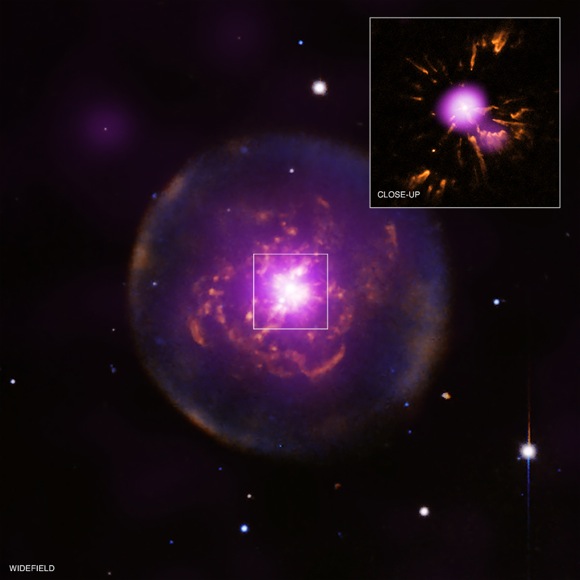 Eventually the outer envelope of the red giant is ejected and moves away from the star at a relatively sedate speed of less than 100,000 miles per hour. The star meanwhile is transformed from a cool giant into a hot, compact star that produces intense ultraviolet (UV) radiation and a fast wind of particles moving at about 6 million miles per hour. The interaction of the UV radiation and the fast wind with the ejected red giant envelope creates the planetary nebula, shown by the large spherical shell in the bigger image.

In rare cases, nuclear fusion reactions in the region surrounding the star’s core heat the outer envelope of the star so much that it temporarily becomes a red giant again. The sequence of events – envelope ejection followed by a fast stellar wind – is repeated on a much faster scale than before, and a small-scale planetary nebula is created inside the original one. In a sense, the planetary nebula is reborn. 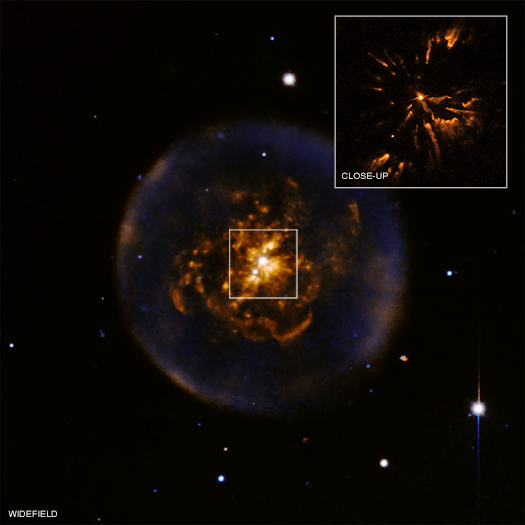 The large nebula seen in the larger image has an observed age of about 12,500 years and was formed by the initial interaction of the fast and slow winds. The cloverleaf pattern of knots seen in both images, correspond to the recently ejected material. These knots were produced much more recently, as they have an observed age of about 850 years, based on observations of their expansion using HST.

Studies of A30 and other planetary nebulas help improve our understanding of the evolution of sun-like stars as they near the end of their lifetime. The X-ray emission reveals how the material lost by the stars at different evolutionary stages interact with each another. These observations of A30, located about 5,500 light years away, provide a picture of the harsh environment that the solar system will evolve towards in several billion years, when the sun’s strong stellar wind and energetic radiation will blast those planets that survived the previous, red giant phase of stellar evolution.

The structures seen in A30 originally inspired the idea of reborn planetary nebulas, and only three other examples of this phenomenon are known. A new study of A30, using the observatories mentioned above, has been reported by an international team of astronomers in the August 20th, 2012 issue of The Astrophysical Journal.