Will Comet ISON survive its brush with the sun?

The comet might disintegrate outright, or break-up in the days or weeks after its close brush with the sun. Or it might survive intact, to pass Earth again someday.

The much-anticipated close approach of comet ISON to the sun this November may be spectacular as viewed from Earth, but it’s unlikely to spell the end of the comet, according to at least one study by scientists. This particular study is a numerical-simulation performed by scientists at the Lowell Observatory and Southwest Research Institute (SwRI). 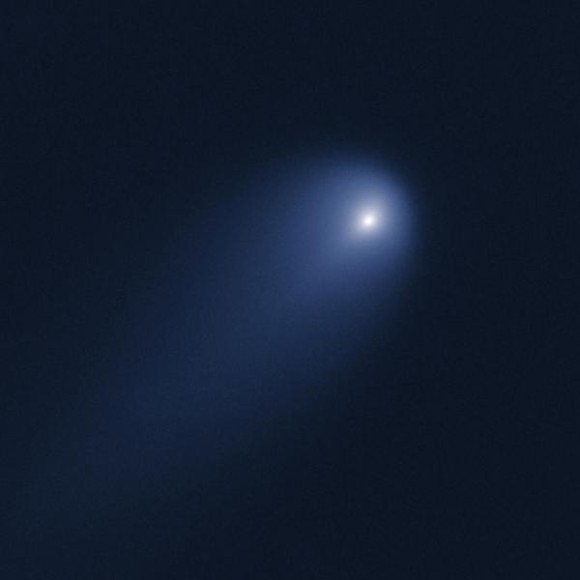 The comet already has achieved significant notice based on its potential brightness as it makes its closest solar approach. It will reach perihelion – its closest point to the sun – on Nov. 28, 2013. At that time, it will be just 1.7 solar radii from the surface of the sun, where it will undergo temperatures approaching 5,000 degrees F.

Knowing what will happen next is critically important, both for scientists interested in inferring the comet’s physical properties, and for members of the public, who wish to observe the comet. The comet’s positioning makes it more favorable for observation from Earth after it passes the sun rather than before, so most intensive observational campaigns by scientists are scheduled after perihelion, in early December. If the comet were not expected to survive, the scientists would have to shift to pre-perihelion studies.

Possible outcomes range from outright disintegration, with nothing of the comet surviving; initial survival after the solar encounter, only to break apart in the following days or weeks; or possible survival intact for another orbit, perhaps to pass by the Earth again someday.

Although little is known about ISON’s exact size, density and composition, researchers involved in the Lowell Observatory and SwRI study, which is funded by NASA’s Lunar Science Institute, performed new numerical simulations and interpreted them in context with the historical track record of comet disruptions and of sun-grazing comet behavior. For example, in 2011 Comet Lovejoy passed much closer to the sun than ISON will. Although it disrupted, its remains turned into a dramatic, headless comet tail.

Unless a comet is large enough, the sun’s heat can destroy it through evaporation of its ices. Comets smaller than 200 meters in diameter almost always disintegrate when passing at this distance, but preliminary measurements suggest that Comet ISON will pass this test.

The other test that Comet ISON must pass is to survive the tidal forces of the sun, which will try to pull Comet ISON apart as it flies by. The important property for this is the comet’s density. Unless ISON is very unusual, it should be dense enough to resist tidal disruption.

A non-spinning or retrograde (backspinning) comet is more likely to survive because the “backspin” cancels out some of the tidal forces nearest the sun. The opposite effect would be seen if the comet were spinning prograde, similar to a tennis ball with topspin. In that case, the spin direction would increase the tidal forces at the surface nearest the sun and aggravate the disruptive potential, even for a comet of far greater density. The faster the prograde rotation and the lower its density, the greater the chances of a comet’s disruption.

Given current constraints on ISON’s nucleus properties and the typically determined values for these properties among all comets, the researchers found that comet ISON is very likely to survive its solar encounter and the forces of evaporation and tidal disruption – unless other factors, such as rotational spin-up due to violent jets of gas, are unexpectedly strong enough to affect the comet substantially.

“A major part of our work was to test if the encounter with the sun would provide enough of a spin increase to pull material off the surface of the comet,” said Dr. Kevin Walsh, a research scientist in SwRI’s Planetary Science Directorate at Boulder, Colo. “When the comet passes near the Sun, it feels the tidal forces pulling on it, and it also gets a slight spin increase due to this rapid flyby. This spin increase is in the prograde direction, so if the comet is already spinning prograde, then it’s just that much closer to spinning fast enough to lose mass.”

Dr. Matthew Knight, research scientist at Lowell Observatory in Flagstaff, Ariz., said, “Whether or not disruption occurs, the largest remnant must be big enough to survive subsequent mass loss due to evaporation for ISON to remain a viable comet well after perihelion.”