Why nasty noises make us squirm

The screechy sound of chalk on a blackboard is unpleasant because of the heightened activity between the emotional and auditory parts of our brain, research shows.

A new study explains the interaction between the auditory cortex, the region of the brain that processes sound, and the amygdala, which is active in the processing of negative emotions when we hear those unpleasant sounds. 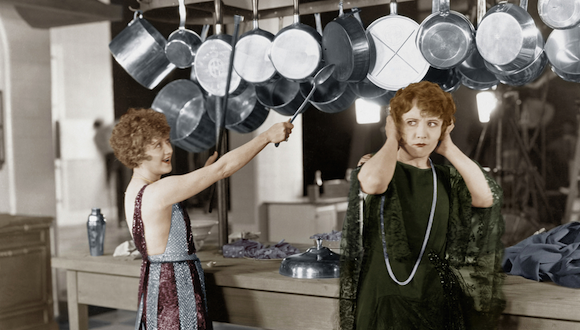 The study finds that in a spectrum of awful sounds, including chalk on a chalkboard and a fork on glass, people hate the sound of a knife on a bottle even more than the classic example, nails on a chalkboard. Image Credit: Everett Collection/Shutterstock

Brain imaging has shown that when we hear an unpleasant noise the amygdala modulates the response of the auditory cortex, heightening activity and provoking our negative reaction.

“It appears there is something very primitive kicking in,” says Sukhbinder Kumar, who has a joint appointment at the Wellcome Trust Centre for Neuroimaging at University College London and Newcastle University. “It’s a possible distress signal from the amygdala to the auditory cortex.”

For the study, published in the Journal of Neuroscience, researchers used functional magnetic resonance imaging (fMRI) to examine how the brains of 13 volunteers responded to a range of sounds.

Participants listened to the the sound they found most awful, a knife on a bottle, babbling water, which was rated the most pleasing, as well as a range of other noises. Researchers then studied the brain response to each type of sound.

Activity of the amygdale and the auditory cortex varied in direct relation to the ratings of perceived unpleasantness given by the subjects. The emotional part of the brain, the amygdala, in effect takes charge and modulates the activity of the auditory part of the brain so that our perception of a highly unpleasant sound, such as a knife on a bottle, is heightened in comparison to a soothing sound, such as babbling water.

Analysis of the acoustic features of the sounds found that anything in the frequency range of around 2,000 to 5,000 Hz was found to be unpleasant.

“This work sheds new light on the interaction of the amygdala and the auditory cortex,” says Tim Griffiths from Newcastle University who led the study.

“This might be a new inroad into emotional disorders and disorders like tinnitus and migraine in which there seems to be heightened perception of the unpleasant aspects of sounds.”