Researchers are developing optomechanical sensors that will help unlock vibrational secrets of chemical and biological samples at the nanoscale.

Ever been to a whispering gallery—a quiet, circular space underneath an old cathedral dome that captures and amplifies sounds as quiet as a whisper? Researchers at the University of Illinois at Urbana-Champaign are applying similar principles in the development optomechanical sensors that will help unlock vibrational secrets of chemical and biological samples at the nanoscale.

“Optomechanics is an area of research in which extremely minute forces exerted by light (for example: radiation pressure, gradient force, electrostriction) are used to generate and control high-frequency mechanical vibrations of microscale and nanoscale devices,” explained Gaurav Bahl, an assistant professor of mechanical science and engineering at Illinois. 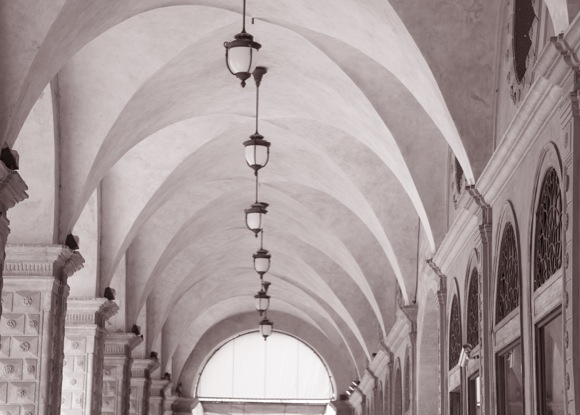 In glass microcavities that function as optical whispering galleries, according to Bahl, these miniscule optical forces can be enhanced by many orders-of-magnitude, which enables ‘conversations’ between light (photons) and vibration (phonons). These devices are of interest to condensed matter physics as the strong phonon-photon coupling enables experiments targeting quantum information storage (i.e. qubits), quantum-mechanical ground state (i.e. optomechanical cooling), and ultra-sensitive force measurements past the standard quantum limit. 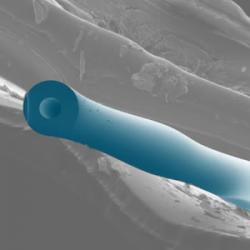 “These mechanical vibrations can, in turn, ‘talk’ to liquids within the hollow device and provide optical readout of the mechanical properties,” said Bahl, who is first author of the paper, “Brillouin cavity optomechanics with microfluidic devices,” published in Nature Communications. 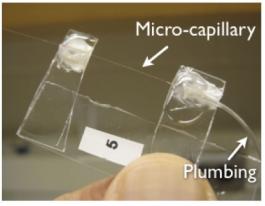 By confining various liquids inside a hollow microfluidic optomechanical (?FOM) resonator, researchers built the first-ever bridge between optomechanics and microfluidics.

Potential uses for this technology include optomechanical biosensors that can measure various optical and mechanical properties of a single cell, ultra-high-frequency analysis of fluids, and the optical control of fluid flow.

In addition to Bahl, the paper’s authors include Kyu Hyun Kim,Wonsuk Lee, Jing Liu, Xudong Fan, and Tal Carmon at the University of Michigan. Much of this work was performed while Bahl, who joined the Engineering at Illinois faculty in 2012, was a postdoctoral researcher in Carmon’s lab. At Illinois, the Bahl research group continues this work, and is investigating this technology for building biosensors.