Which neurons fire when this image tricks your brain?

Scientists have pinpointed the brain region responsible for “illusory contours”—when you perceive imaginary shapes and surfaces against a fragmented background. 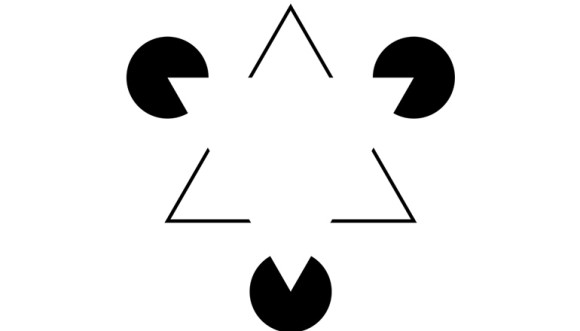 “Basically, the brain is acting like a detective,” says Alexander Maier. “It is responding to cues in the environment and making its best guesses about how they fit together. In the case of these illusions, however, it comes to an incorrect conclusion.” (Credit: Fibonacci via Wikimedia Commons)

For example, the logo of the 1984 Los Angeles Olympics includes red, white, and blue stars, but the white star is not really there: It’s an illusion. Similarly, the “S” in the USA Network logo is wholly illusory.

In the September 30 online early edition of the Proceedings of the National Academy of Sciences, Maier’s team reports that they have discovered groups of neurons in a region of the visual cortex called V4 that fire when an individual is viewing a pattern that produces such an illusion and remain quiescent when viewing an almost identical pattern that doesn’t.

Studies have shown that a diverse range of species, including monkeys, cats, owls, goldfish, and even honeybees perceive these illusory contours. This has led scientists to propose that they are the byproduct of methods that the brain has evolved to spot predators or prey hiding in the bushes, a capability with considerable survival value.

Although scientists discovered illusory contours more than a century ago, it is only in the last 30 years that they have begun studying them because they reveal the internal mechanisms that the brain uses to interpret sensory input.

In mammals, visual stimuli are processed in the back of the brain in an area called the visual cortex. Efforts to map this area have found that it is made up of five different regions at the back of brain (labeled V1 to V5).

The primary visual cortex, V1, takes the stimuli coming from the eyes and sorts it by a variety of basic properties, including orientation, color, and spatial variation. It also splits the information into two pathways, called the dorsal and ventral streams.

From V1, both streams are routed to the second major area of the visual cortex. V2 performs many of the same functions as V1 but adds some more complex processing, such as recognizing the disparities in the signals coming from the two eyes that produce binocular vision.

“Studies have shown that V4 is involved in both object recognition and visual attention, so we thought it might also be involved with illusory contours,” says first author and graduate student Michele Cox.

First, the researchers searched for the neurons in V4 that were associated with different locations in the retinas of macaque monkeys. Once these maps were complete, they rewarded the monkeys for staring at a screen containing an example of an illusory contour called a Kanizsa square.

It consists of four “Pac-Man” figures with their “mouths” oriented to form the corners of a square. When black Pac-Men are placed on a white background, the brain creates a bright white square connecting them.

While the monkeys were looking at the Kanizsa square, the researchers discovered that the neurons that represented the area in the middle of the Pac-Men, the area covered by the illusory square, began firing. However, when the monkeys viewed the same four Pac-Men with their mouths facing outward—an orientation that doesn’t produce the illusion—these central neurons remained silent.

“Basically, the brain is acting like a detective,” says Maier. “It is responding to cues in the environment and making its best guesses about how they fit together. In the case of these illusions, however, it comes to an incorrect conclusion.”