Where in the U.S. you’re most likely to be struck by lightning

One moment you’re strolling across the golf course. The next moment your body is wracked with the searing pain of 50,000 degrees Fahrenheit. 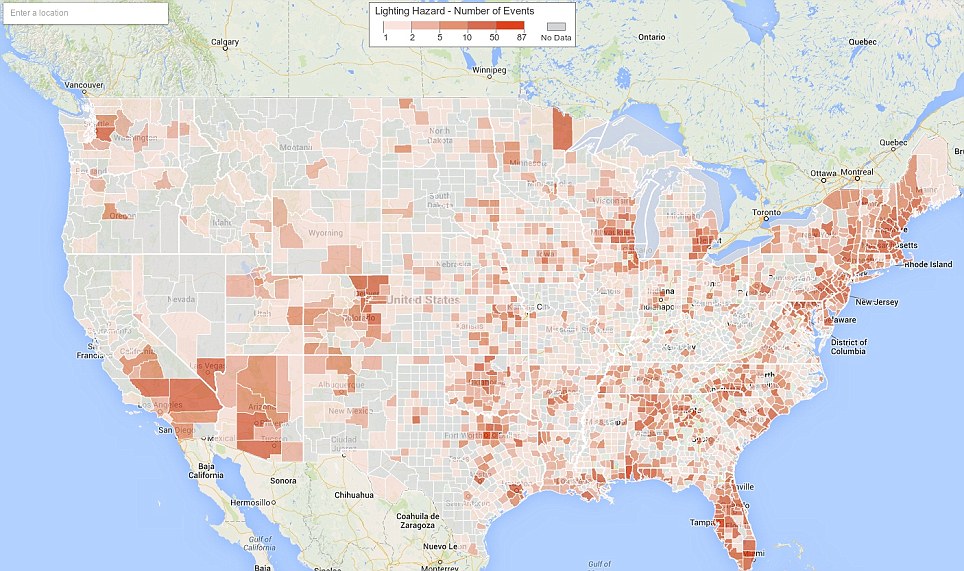 Where in the U.S. you’re most likely to be struck by lightning, by county.

Lightningophobes, take note. Here’s a new map, arranged by county, showing – over a 15-year period – injuries, fatalities, and instances of property and crop destruction, caused by lightning. Darker-red areas show where the lightning events have tended to happen more regularly. The most populated areas suffer the most lightning fatalities, of course. The map is part of Google Maps Gallery. It is called “Lightning Spatial Hazard Events and Losses for the United States, 1995-2009.” The Atlantic Cities wrote of this map:

One moment you’re strolling across the golf course, pointing a 9 iron at a funny-looking cloud. The next your body is wracked with the searing pain of 50,000 degrees Fahrenheit and you’ve got the beginnings of a weird scar shaped like a fractal.

There’s also a map arranged by state, so you can decide where not to move next, if the possibility of a lightning scares you. 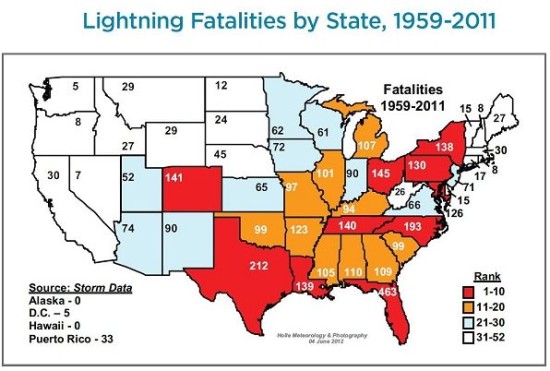 Lightning strikes by U.S. state. Visit NOAA to see a map weighted by population. You’ll see, for example, that while Texans suffer many lightning fatalities, the strike/person ratio is really not bad.

In a typical year, the U.S. is zapped by more than 22 million lightning strikes that kill 55 to 60 people and injure 400.

But let’s not forget the rest of the world. NASA has this map:

Bottom line: Where in the U.S. and world you’re most likely to be struck by lightning.