Network of stations with seismometers and air pressure sensors detected the blast waves.

A network of seismographic stations recorded spectacular signals from the blast waves of the meteor that landed near Chelyabinsk, Russia, as the waves crossed the United States.

While thousands of earthquakes around the globe are recorded by seismometers in these stations–part of the permanent Global Seismographic Network (GSN) and EarthScope’s temporary Transportable Array (TA)–signals from large meteor impacts are far less common. 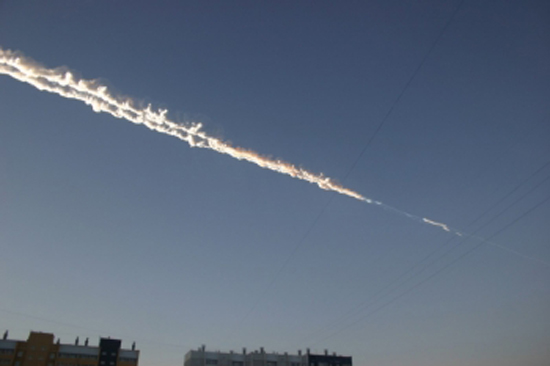 The ground motions were recorded by the GSN and the TA. The pressure waves were detected by special sensors that are part of the TA.

“These recordings of seismic waves through the Earth, and sound waves through the atmosphere, are good examples of how these facilities can help global organizations better monitor earthquakes, clandestine nuclear tests and other threats.”

The Chelyabinsk meteor exploded in the atmosphere at approximately 9.20 a.m. local time.

The blast caused significant damage in the city, breaking thousands of windows and injuring more than 1,000 people.

Energy from the blast created pressure waves in the atmosphere that moved rapidly outward and around the globe. The blast also spread within the Earth as a seismic wave. 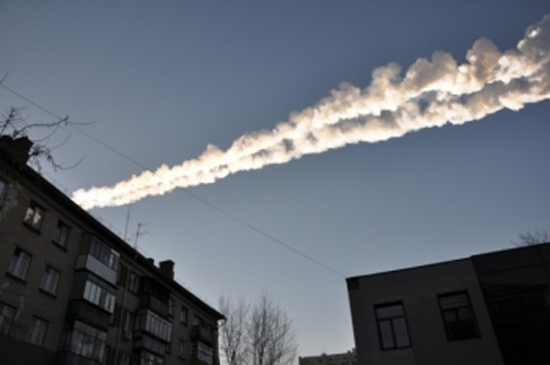 Is it a bird, a plane, a…meteor? A view of the meteor as it streaked by buildings in Russia. Credit: Russian Emergency Ministry

GSN stations in Russia and Kazakhstan show the ground-traveling wave as a strong, abrupt pulse with a duration of about 30 seconds.

The atmospheric waves–referred to as infrasound–were detected across a range of inaudible frequencies and were observed at great distances on infrasound microphones.

When the infrasound waves reached the eastern United States–after traveling 8.5 hours through the atmosphere across the Arctic from the impact site in Russia–they were recorded at TA stations at the Canadian border. 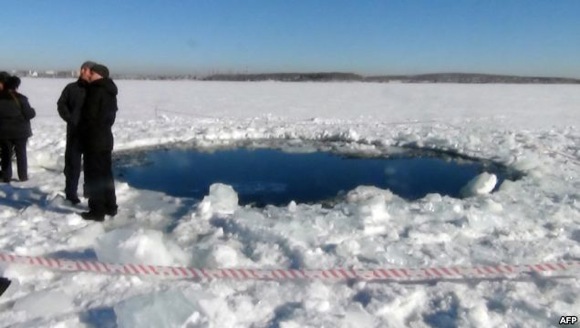 Hole in the ice at Russia’s Lake Chebarkul, said to be caused by the meteor. Credit: Wikimedia Commons

Infrasound sensors at TA stations along the Pacific coast and in Alaska also recorded the blast, but with signatures that were shorter and simpler than those recorded by stations in the mid-continent and along the southeastern seaboard.

The duration of the signals, and the differences between the waveforms in the east and west, scientists believe, are related to the way in which energy travels and bounces on its long path through the atmosphere.

The Transportable Array is operated by the IRIS (Incorporated Research Institutions for Seismology) Consortium as part of NSF’s EarthScope Project. It consists of 400 stations traversing the United States, recording at each site along the way for two years.

Each of the TA stations was originally equipped with sensitive broadband seismometers for measuring ground motions, but in 2010, NSF awarded the University of California, San Diego, in cooperation with IRIS, funding to add pressure and infrasound sensors.

These special sensors help scientists understand how changes in pressure affect ground motions recorded by the TA’s seismometers and provide a view of regional pressure changes related to weather patterns.

The Chelyabinsk meteor is the largest signal recorded to date.

In 2013, the Transportable Array will reach states in the Northeast, completing its traverse of the contiguous United States and southern Canada.

The GSN’s primary mission is collecting data to monitor worldwide earthquakes and to study the Earth’s deep interior.

As part of a worldwide network of seismic stations, data from the GSN have contributed over the past three decades to the monitoring of nuclear explosions at test sites in the United States, the former Soviet Union, India, Pakistan and Korea. For example, GSN stations provided observations of the Korean nuclear test on Feb. 12, 2013.