Data from Voyager 1, now more than 11 billion miles from the sun, suggest the spacecraft is closer to becoming the first human-made object to reach interstellar space.

Data from Voyager 1, now more than 11 billion miles (18 billion kilometers) from the sun, suggest the spacecraft is closer to becoming the first human-made object to reach interstellar space. 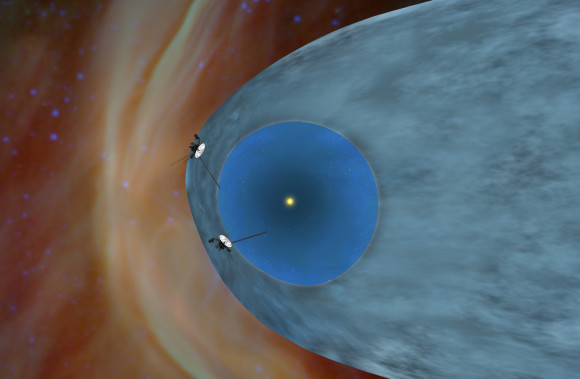 This artist’s concept shows NASA’s two Voyager spacecraft exploring a turbulent region of space known as the heliosheath, the outer shell of the bubble of charged particles around our sun. After more than 35 years of travel, the two Voyager spacecraft will soon reach interstellar space, which is the space between stars. Our sun gives off a stream of charged particles that form a bubble around our solar system, known as the heliosphere. The solar wind travels at supersonic speeds until it crosses a shockwave called the termination shock. That part of our solar system is shown in bright blue. Voyager 1 crossed the termination shock in December 2004, and Voyager 2 did so in August 2007. Beyond the termination shock is the heliosheath, shown in gray, where the solar wind dramatically slows down and turns to flow toward the tail of the heliosphere. Outside the heliosphere is territory dominated by the interstellar wind, which is blowing from the left in this image. As the interstellar wind approaches the heliosphere, the interstellar ions are deflected around the outside as indicated by the bright arc.Image credit: NASA/JPL-Caltech

Research using Voyager 1 data and published in the journal Science on June 27 provides new detail on the last region the spacecraft will cross before it leaves the heliosphere, or the bubble around our sun, and enters interstellar space. Three papers describe how Voyager 1’s entry into a region called the magnetic highway resulted in simultaneous observations of the highest rate so far of charged particles from outside heliosphere and the disappearance of charged particles from inside the heliosphere.

Scientists do not know exactly how far Voyager 1 has to go to reach interstellar space. They estimate it could take several more months, or even years, to get there. The heliosphere extends at least 8 billion miles (13 billion kilometers) beyond all the planets in our solar system. It is dominated by the sun’s magnetic field and an ionized wind expanding outward from the sun. Outside the heliosphere, interstellar space is filled with matter from other stars and the magnetic field present in the nearby region of the Milky Way.

Voyager 1 and its twin spacecraft, Voyager 2, were launched in 1977. They toured Jupiter, Saturn, Uranus and Neptune before embarking on their interstellar mission in 1990. They now aim to leave the heliosphere. Measuring the size of the heliosphere is part of the Voyagers’ mission.

Before Voyager 1 reached the magnetic highway, charged particles bounced around in all directions, as if trapped on local roads inside the heliosphere, as shown in the first scene. The pink particles are the lower-energy charged particles that originate from inside the heliosphere, which is the bubble of charged ions surrounding our sun. The second scene shows Voyager entering the highway region, where inside (pink) particles zip away and particles from interstellar space (blue) stream in. These interstellar particles are called cosmic ray particles and have more energy than the inside particles. In the third scene, further travel through the magnetic highway means that all of the inside particles are leaving and the population of outside particles is much higher. The cosmic ray particles rapidly fill this new region to the same level as outside and speed in all directions. The fourth scene shows the point at which all of the inside particles have zipped out, leaving an area dominated by cosmic rays from outside.

These animations are based on data from Voyager 1’s cosmic ray instrument. These particles are invisible to the human eye and less populous, but are visualized here in exaggerated populations.

Bottom line: Data from Voyager 1, now more than 11 billion miles (18 billion kilometers) from the sun, suggest that after 35 years of travel, the spacecraft is close to becoming the first human-made object to reach interstellar space.