An international team of scientists use the VISTA infrared survey telescope to create the largest ever catalog of the center of our galaxy.

A nine-gigapixel zoomable image of 84 million stars has been created by an international team of astronomers using the UK-built VISTA infrared survey telescope at ESO’s Paranal Observatory. The image is so large that, if printed with the resolution of the average book, it would be nine meters long and seven meters tall. The huge dataset contains ten times more stars than previous studies and is a major step forward for the understanding of our home galaxy, the Milky Way. 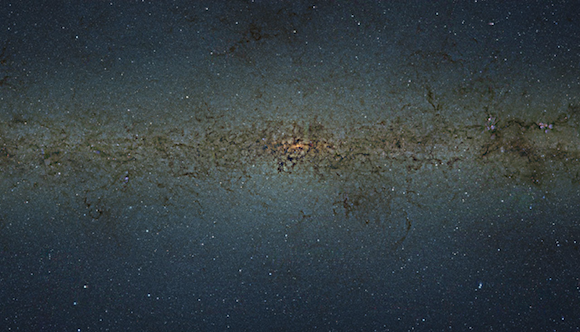 “This gigantic image is an impressive testament to the quality of the images being taken at the VISTA telescope which UK astronomers and engineers conceived, designed and built for delivery to its home at the European Southern Observatory site in Chile’s Atacama desert”, said Jim Emerson from Queen Mary, University of London, which leads the VISTA consortium. “The unprecedented detail on numbers, types, and locations of stars towards the center of our galaxy is giving us exciting new tools to test competing models for how our galaxy is really structured and came to be as it is”, he added. Queen Mary is one of two UK institutions named on the paper. The other is the University of Hertfordshire.

Most spiral galaxies, including our home galaxy, the Milky Way, have a large concentration of ancient stars surrounding the center, that astronomers call the bulge. Understanding the formation and evolution of the Milky Way’s bulge is vital for understanding the galaxy as a whole.

“By observing in detail the myriads of stars surrounding the center of the Milky Way we can learn a lot more about the formation and evolution of not only our galaxy, but also spiral galaxies in general,” explains lead author of the study, Roberto Saito (Pontificia Universidad Católica de Chile, Universidad de Valparaíso and The Milky Way Millennium Nucleus, Chile).

However, as Dante Minniti, co-author of the study explains, obtaining detailed observations of this region is not an easy task: “Observations of the bulge of the Milky Way are very hard because it is obscured by dust. To peer into the heart of the galaxy, we need to observe in infrared light, which is less affected by the dust.”

The large mirror, wide field of view and very sensitive infrared detectors of VISTA make it by far the best tool for this job. VISTA was designed by STFC’s UK Astronomy Technology Center (UK ATC) who also Project Managed the manufacture and assembly of the facility. Gary Rae, Head of Engineering, UK ATC said: “It’s really great to see VISTA performing impeccably for ESO and achieving world-class science for the community; this is a fitting reward to the engineers and scientists from the UK who were involved in the delivery of this technically challenging project.”

The team of astronomers is using data from one of six public surveys carried out with VISTA, the VISTA Variables in the Via Lactea program (VVV), The data has been used to create a monumental 108 200 by 81 500 pixel color image containing nearly nine billion pixels, one of the biggest astronomical images ever produced. The processing of VISTA’s raw images into the astronomically useful calibrated images which were then used to construct this image was carried out at the Cambridge Astronomical Survey Unit, a part of the UK’s VISTA Data Flow System.

Professor Richard Holdaway, Director, STFC’s RAL Space where the camera was built, said; “Sometimes in astronomy there are moments when you simply think, wow! This is one of those times. The detail unveiled through the scale of the image and the technical excellence by the teams who helped achieve this is incredible. It really will allow us to push the boundaries of what we know about our home galaxy.”

The new color-magnitude diagram of the bulge contains a treasure trove of information about the structure and content of the Milky Way. One interesting result is the large number of faint red dwarf stars. These are prime candidates around which to search for small exoplanets using the transit method.