Smoke from the Rim Fire choked Yosemite National Park during the busy Labor Day Weekend. The smoke is thick, entirely blocking the view of the ground from space. From the ground, the smoke obscured Yosemite’s normally pristine views.

Air quality reached unhealthy levels from Yosemite to the San Joaquin Valley, warned the National Weather Service in an air quality alert. Since fine particles in smoke can irritate the eyes and respiratory system and aggravate chronic heart and lung disease, people were advised to avoid strenuous outdoor activity or remain indoors. 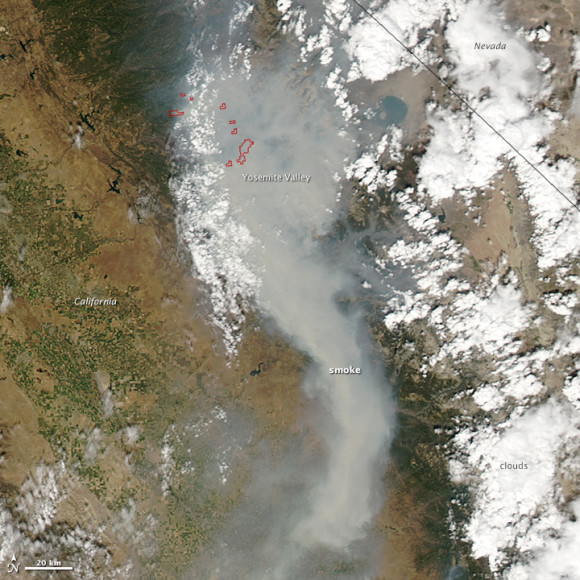 The Moderate Resolution Imaging Spectroradiometer (MODIS) on NASA’s Aqua satellite acquired this view of the fire and smoke on August 31, 2013. Red boxes outline the active fire areas detected by MODIS. The smoke is brown and smooth in texture compared to the bright white clouds.Image credit: NASA

The smoke is thick, entirely blocking the view of the ground from space. From the ground, the smoke obscured Yosemite’s normally pristine views. The two photos below contrast August 31 and September 2, 2013, from the National Park Service’s Turtleback Dome webcam. Turtleback Dome is south of the Rim Fire, immediately west of Yosemite Valley. Though smoke had the greatest impact on local communities, Aqua’s AIRS instrument tracked carbon monoxide from the plume across much of North America.

By September 2, the Rim Fire had burned 228,670 acres (357 square miles), making it the largest fire in the United States so far in 2013. The fire is 60 percent contained and is threatening 4,500 buildings. Eleven homes and 100 other buildings have been destroyed. The fire started on August 17 and is expected to be contained by September 20.